Dining While Black Restaurant Review No. 2 – The Foxy Brown 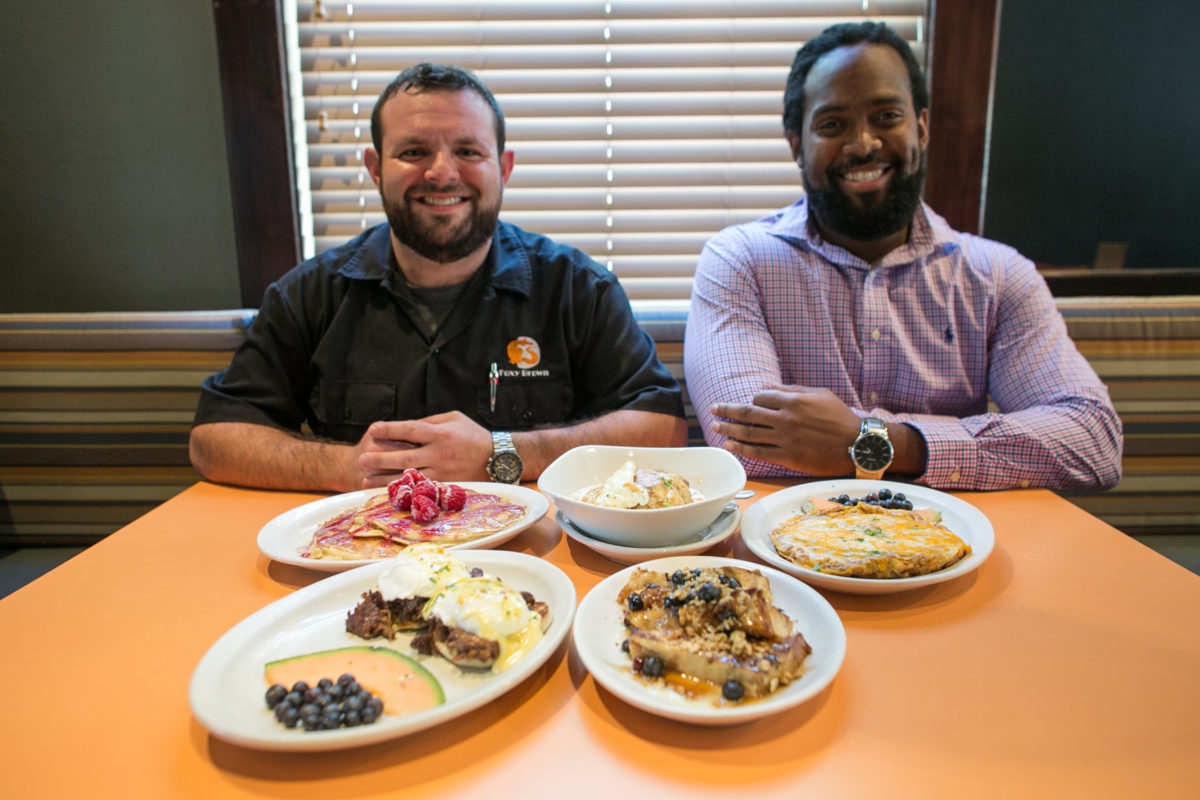 What does Pam Grier’s 1974 Blaxploitation film Foxy Brown have in common with a quaint brunch spot in the heart of downtown Fort Lauderdale? They both received the coveted Grandma’s approval!  A nostalgic eatery—The Foxy Brown takes you back to a simpler time when you had to help snap peas, scale freshly caught fish brought by Grandpa who spent all day in the Everglades fishing with his 30ft cane pole, or when you had to drink from the outside water hose while playing because entering the house during outside play time was considered an unforgivable sin punishable by imprisonment or public beating.

Until recent, I have not given serious thought to selecting great brunch spots.  However, at 33 years old, in the words of blues great Muddy Waters, “I’m a full grown man”, and as such, need to take my brunch serious.  This seriousness lead me to The Foxy Brown, inconspicuously nestled right off East Broward Boulevard in Fort Lauderdale.  Its part attractive sit-down restaurant and part beer and wine bar.  All dishes are homemade, including sauces and even some condiments. Not to be confused with Foxy Brown’s 2001 album—Broken Silence, but this Foxy Brown definitely broke the silence with their over-sized homemade Biscuits & Gravy ($15) smothered with a house made New Orleans style tasso ham gravy.  The biscuit was the best thing on the menu in my opinion.  It is a MUST HAVE.

After devouring the biscuit, I became instantly gluttonous. I ordered the green fries ($9), which taste like a Japanese and African-American grandma merged into one body and created this amazing tempura battered green goodness.  I didn’t use the house sauce provided, I preferred ketchup. They were absolutely delicious.

Continuing in what has descended into careless ordering, I came across the deviled eggs ($3). I was a little disappointed.  I am use to African-American style when it comes to deviled eggs. These were different, not bad—just different. Had more of a strong relish taste than I’m used to.  If you’re in the mood for some deviled eggs, these will do, but they weren’t the best.

Now in a Xanax state of happiness, I looked over and saw a rather mean looking woman enjoying a milkshake. She was obviously mad about something, so like any gentleman, I asked her what flavor shake she was drinking. She looked at me, and kindly said “none of your business”. I then asked the server to bring me what the lady was drinking, in spite of her being an obvious member of the Legion of Doom. The shakes at The Foxy Brown are hand stirred.  With any human, come flaws.  The weak arms of our server were not able to stir the large lumps of ice cream, so a battle ensued between my spoon and straw working to destroy these large ice cream mountains for human consumption. Further, the milkshake tasted like something you can make at home by buying quality store bought ice cream and Hershey’s syrup.  Stirring the syrup and ice cream would produce this shake.  It wasn’t terrible, just not worth the ($7) charged.

Trying to forget the Legion of Doom member snapping at me, I put in an order for a short stack of ($13) Raspberry and White Chocolate Pancakes.  These pancakes were good as hell.  They were both gourmet and homey at the same time.  The white chocolate and raspberry glaze slid down the warm fluffy pancake giving it just enough sweetness and tart from the raspberries allowing you to drizzle their house syrup on this tower of fluffiness. Lawd have mercy.  This is a MUST HAVE.

Feeling a bit bloated, I wasn’t going to let the Devil stop me from enjoying God’s goodness.  I decided to get something on the lighter side.  I ordered one of the most complex, yet delicious salads I’ve had since eating at The Beverly Hills Café (They have amazing salads at Beverly Hills Café in Miami Lakes).  This was one of Chef Lorenzo’s creations.  You have to request it because it is NOT ON THE MENU.  The Shrimp, Prosciutto, Tomato, Grilled Peach Salad with Arugula topped with a white wine vinaigrette dressing ($15) is a dieter’s heaven. This healthy creation had me rethinking my earlier choices. You don’t have to sacrifice health for taste when it comes to this dish. A guilt free option, I was actually giving thought to meal prepping next week and get my old body back. Actually no, the old body was worse. Well, you get what I’m trying to say…the dish was healthy.  The shrimp was grilled and seasoned to perfection along with the savory and sweet charred peaches which married the saltiness of the prosciutto.  This marriage had an adorable baby whose name was OFF THE FREAKIN CHAIN. This is yet another MUST HAVE!

Following this healthy creation, I felt as if I deserved a cheat meal, and ordered the Short Rib Benedict ($15). This scrumptious breakfast sandwich has marinated short rib meat with a fried egg on top. The yolk bursting from the fried egg, meshing with the hollandaise sauces and the meat was everything!  My meat was a little overcooked, but it didn’t take away from the awesomeness.

Realizing I looked insane with all this food, I decided to press the damn gas on indulgence.  I honestly didn’t give a flying duck.  There was no turning back now.  I ordered the ($15) Chef imagined Frittata, which had crispy pork belly and 3 cheeses melted on top. It was tasty, but I’m partial to pork belly. Whenever I have time I devote it to swine. Swine time is very important to me.

Last but not least, I ordered the mac and cheese. I was a little disappointed. This mac and cheese was mainly wet, with strong hints of cayenne pepper in the roué.  My African-American palate kicked in while sampling this and it became very upset. I had to stop my palate from yelling at my brain.  My brain explained to my palate that it should have stayed away from ordering mac and cheese if I am used to the African-American kitchen.  My palate apologized and we moved on.

The Foxy Brown was definitely a great experience.  It will be one of my monthly brunch spots and I highly recommend you give it a try if in the Fort Lauderdale area.  The servers and management staff were extremely knowledgeable and caring. You feel warm and welcomed at this establishment. Prices are a little high, but in most cases worth it, given the love that goes into cooking from scratch.  Ask for Chef Lorenzo if you make your way there, and tell him you heard about The Foxy Brown right here at THE HUNGRY BLACK MAN.

Contact me with any questions regarding this review at [email protected]

Parking: Self Parking Only

No Older Articles
Next Article