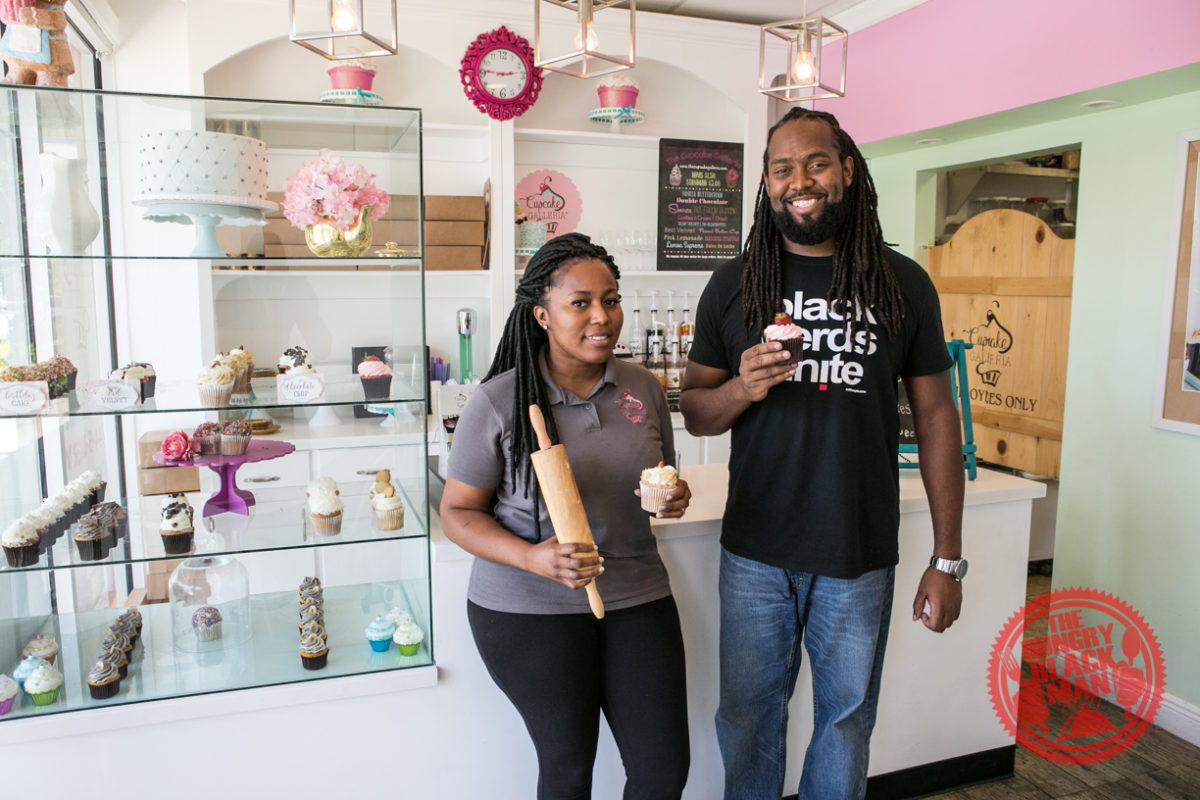 “If cameraman Korey (@KoreyDavisPhotography) doesn’t shoot it I won’t eat it.”  South Florida rivals many locales in the world when it comes to opulence and decadence (and ratchetness).  From our pristine beaches, to our exotic care free culture, there is very little we deny ourselves.  It is with this non-denial that I visited the sweet and deliciousness of Cupcake Galleria.  This quaint café located within Broward County (home of Kodak Black’s ignorant ass) in the City of Davie, sits in an unassuming strip mall next to a pretty busy farmers market.  The above picture is the first cupcake milkshake I’ve ever had.  Only “US” will come up with some s#[email protected] like this. I mean, damn. You already got a cupcake, but you want to drink the [email protected]$% too!  We something else.  I WANT MY CUPCAKE IN LIQUID FORM!  We will talk about this mofo later.

Until recently, cupcakes were out of control, especially on the west coast and New York. You had these crazy television shows and all sorts of deranged bakers dedicated to creating and revealing some of the most elaborate and whimsical cupcakes.  Millionaires and diabetes (Wlford Brimley voice) increased due to these delicious teats,  but the fad eventually died. Consumers began to become more health conscious, and the nostalgia of the cupcake was kicked away by crossfit junkies….(don’t you just hate those crossfit cult members?).  Well, not to everyone.  You see, many of those cupcake entrepreneurs jumped on as bandwagon fans and fell off when their “team” loss, but as with many of our favorite sporting teams, you have a small group of loyal and dedicated fans who will never leave or forsake their team. These fans will defend their team weekly, despite crushing loss after loss.  They will purchase season tickets even though that money was to be used in buying a much needed new mattress.  Yes, these fans will sit in Miami Dolphin Stadium with no shade structure, exposed to the deadly Miami heat while stuffed in tiny stadium seating next to a 400 lbs. guy seeping onto their side of the seat smelling like pickles, sweat, and cheese.  Ok, sorry. I’m a Dolphin fan and I get a little emotional, but yeah, you get the point.  Former police officer Charli Flanders is definitely that fan for Team Cupcake.  She opened the Cupcake Galleria in August 2015 as a small internet café selling cupcakes, shakes, and specialty teas.

So what in the world gave her the crazy idea to open a dessert parlor when everyone is trying to get in shape and the cupcake craze dead? “I opened because I always wanted to become an entrepreneur but had a great job, making close to $100k a year–where I could help people and I was honestly a bit scared to walk away from that.  One summer, my daughter wanted extra work and began job hunting, but was unsuccessful. I suggested the sale of cupcakes at her school for extra money.  I learned how to bake from my mother and grandmother, so I whipped up a couple dozen, and before I knew it, we were getting orders for specific flavors in large quantities.   That’s when I realized people were willing to pay for my product.  I talked it over with my husband, and I opened the Cupcake Galleria.  Of course leaving my job was hard, but I honestly don’t regret it for one second.”

The cozy café has vibrate and bright colors with seating inside and out.  When you enter, you feel as if you were transported to the scene in the Wizard of Oz where the little people were singing Lolly Pop King with all the pretty colors surrounding the fabled land.  I was happy there was internet, because I had a boat load of work to finish for my job, so I definitely took advantage of the free wifi. Once I was done with my emails, I wanted to focus on tasting these cupcakes. I noticed this place had received an award from the New Times for “Best Cupcake in Broward County”.  When you see things like that, you expect greatness!  I started out with the Strawberry Milkshake.  IT WAS AMAZING. For my taste, this is the best cupcake here. It stood out from the rest.  So if you visit, this cupcake should be your first stop.  It was super moist and rich with strong hints of fresh strawberry throughout.  All cupcakes are priced at ( $3.00) by the way.

My second cupcake was the Almond Cream.  I love almonds so I knew I would be partial to this cupcake.  Again, the texture was great along with a superb balancing of buttercream icing and almonds that forged a consistent morphing of flavors from one extreme to the next, finally landing your taste buds smack dab in the middle for a perfectly balanced sweeten goodness.

I moved on to Red Velvet.  I must say if you are a Red Velvet snob, the flavor may be a bit standard. The consistency and texture was excellent, and the taste was acceptable but nothing to rave about. This cupcake was my least favorite, but apparently one of the best sellers.  I definitely think it’s a decent cupcake, just not the best Red Velvet I’ve had. Cameraman Korey liked it. But he’s from Detroit, so he doesn’t really know much about good southern baking (update, I visited Detroit, and I was dead as wrong for this statement).

My fourth cupcake flavor was Birthday Cake.  It was pretty good. The Texture was soft and moist as with the others, but a little heavy on the vanilla favor.  If you like vanilla birthday cake, then you would devour this cupcake.  I enjoyed it and would definitely order it again.

Next, I had the Maple Almond Cream.  It’s like having a pancake with syrup in cupcake form. Me personally, I think she should take the almond out and put bacon in.  Yes, Swine Time! I probably would not have this flavor often, because like so many of these cupcakes, it is really, really sweet, and the maple flavor without bacon or something salty to create balance is just too much sweetness for me personally, but Cameraman Korey loved this one as well.

Switching gears a bit, I tried the Peanut Butter Cup.  Everyone who likes peanut butter knows that its flavor will kick the ass of any other flavor trying to mesh with it.   I’m definitely picky when it comes to peanut butter.  However, this cupcake passed the test. Each flavor did an awesome job meshing, and my palate was pleased with the light to medium peanut butter taste incorporated within the vanilla cupcake. I actually wanted to take one to go. It wasn’t as sweet as the others, so I felt that I could eat another after dinner the same day.  Unfortunately, I ate it on my way home.

My final cupcake was the Blue Velvet.  Now this was interesting in a good way.  It had actual blueberries throughout. Surprisingly, the blueberry cupcake taste nothing like a blueberry muffin.  I requested no icing, because I did not want my sugar levels to explode. This was a great decision, because I had the opportunity to taste the essence of the cupcake. It was perfect.  This was one of my favorites as well.

I needed something to wash all this cupcakery down.  I put in an order for their signature cupcake milkshake ($7.26) using my 2 top cupcakes of the day. The shake came with a cupcake attached to a giant straw, which was cool.  The shake itself was excellent, but the blinder did not completely blend each piece of cupcake in the ice cream. This was an issue for me, because I hate wet bread of any kind.  Following the shake, I ordered one more cupcake and a cup of their signature tea ($2.50). The tea was Queen of England approved and was served in a really cool golden tea cup.

I was impressed with the shop and the quality of the cupcakes.  I would definitely be back. This is a perfect spot for celebrating a special occasion with the kids, or if your sweet tooth is turned on.  I spoke with Charli before I departed, just to get a feel of who comes to the spot and how she developed the concept, flavors, and such.  In celebrating National Black Business Month, I love hearing amazing stories of how these businesses thrive, and at overcome obstacles.  Either way, the stories provide insight into a group of folk, who at times are invisible.  “Most of our clients are mothers with children, foodies, and people who are looking for something different.  We understand everybody doesn’t want to pay $3,00 for a cupcake, but it’s important to note our cupcakes are made from scratch.  We don’t use any artificial flavoring or hydrogenated oils in our butter cream or cake batter. We utilize the local farmers market next door to purchase all of our fruit. It’s safe to say that a 5 year old can pronounce all the ingredients in our cupcakes.”  This was refreshing to hear, because I was killing each and every cupcake that was placed in front of me. I had icing all in my beard and was kind of embarrassed.

I asked Charli how was it to be an African-American female business owner in such a competitive market?  “As far as female business owners, I am happy that I am able to inspire other women of color.  I battled whether to put my picture as owner on the company’s website. I came to the conclusion that I am who I am, and I think that we deserve recognition for our hard work.  For a long time I didn’t want to put my picture up because I thought that people would judge us unfairly due to the stigma that is placed on black businesses.  I want to get away from all the negative stereotypes and show that no matter how you look, you can be successful in running a great business.”  The service here was great and at every interaction, I experienced constant smiling from staff which made me feel welcomed and appreciated as a customer.  Cupcake Galleria definitely gets thehugnryblackman’s approval and is definitely worth a visit.

Parking: Ample in front of store

Black People! Give Indian Cuisine a try! I promise, you won't regret it.