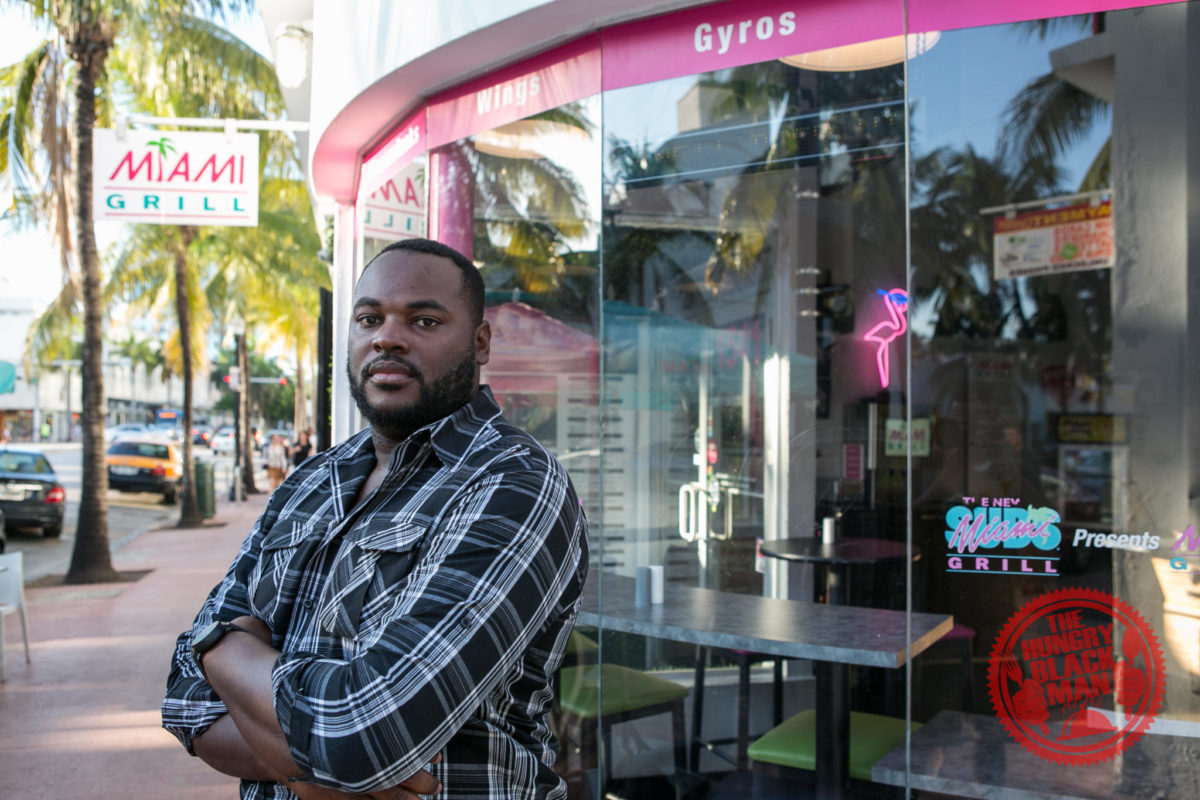 “If cameraman Korey (@KoreyDavisPhotography) doesn’t shoot it, I won’t eat it.”  It’s common knowledge that Miami locals avoid South Beach as much as possible. Black locals especially avoid it because of how Black folk – locals and out-of-towners – have been treated during Memorial Day Weekend.  Actually f#@% that, how we’re treated every damn weekend.

Shoddy treatment notwithstanding, there are times when entertaining out of town guests, accompanying friends and family for a swim or to a function at the Fillmore with its splendid acts becomes a necessary trip.

Two common decisions facing beach-goers include where to park and what to eat.  I can help you with the latter – significant because most beach restaurants are overpriced and underwhelming. It has been my experience time and again that you’ll come out better grabbing a slice from one of the many pizza spots than going to a swanky yet disgusting joint like Prime 112, where you can easily spend $100 a person.  My hate for Prime 112 was softened slightly because each time I’ve gone; star gazing was a part of my experience. I’m not sure why, but celebrities love this place.

Fortunately, a new quick casual concept—Miami Grill, has opened its doors in the heart of South Beach on 1541 Washington Ave. directly across the street from DREAM NIGHTCLUB.

I’m thrilled to report that the former Miami Subs has died along with its pedestrian menu and terrible customer service.  Being called Ricky Williams by staff at my neighborhood Miami Subs aggravated me more than they realized, and I never went back.

Owner of the South Beach store, and executive partner with Miami Subs parent company, Miami Subs Capital Partners, is Mr.  Dieuveny “DJ” Louis – the only black member of the corporate partners’ executive team and the only black owner of a quick casual restaurant in South Beach. A serial entrepreneur, DJ also owns a coffee brand (https://www.instagram.com/papocoffee/) Papo, as well as his hallmark company TOAST VODKA (http://www.toastvodka.com/).

At only 33, he is truly showing #blackmangenius.  Confident in the new Miami Grills, he assured me that I would have great service and an excellent culinary experience.  Well, let’s see…..

DJ was instrumental in the corporate rebranding of the fast food chain to a new and improved quick casual concept as seen with his South Beach store.  (Seems like they’re seriously addressing some of the complaints from dissatisfied customers like me.)

“It’s important that we offer a new and reimagined experience for our customers. Embracing the fast-casual concept, redesigning a more eclectic menu with healthy options, and improved customer service was essential to an improved customer experience,” he shared.

“The new Miami Grill currently offers beer and wine, with liquor hopefully coming online in the next few years.  We want to give you a little bit of Miami’s vibrancy in every Miami Grill visited,” DJ stated as he waved to incoming customers. As I’ve mentioned, I was not a Miami Subs fan, but because I am a fan of black entrepreneurs, I decided to give the brother a chance.

Admittedly skeptical, when I walked in and encountered what felt more like a cool sports bar or lounge feel with neon lights, LED televisions, wine and beer vending machines topped by amazing smells coming from the open kitchen, I began to relax a tad.

I was impressed with the manager and his team as they took orders, cooked food, all while keeping the place spotless, which is a major feat for South Beach casual restaurants that have a reputation for needing improvement in the cleanliness department. Instead of the standard dirty SOBE hole in the wall feel, it felt more like a Smash Burger or a swanky 5 Guys. My first order was the Boneless Chicken Bites (fried) with a side of seasoned fries and a large drink ($10.00).  They’re similar to the chicken strips at Denny’s, a restaurant I mostly hate; except for their saving grace chicken strips when I need to soak up my Hendricks on a late Saturday night.

The sauce, eight to choose from, made Miami Grill’s strips taste amazing.  The “South Beach” sauce became my favorite because of its tangy sweetness that I really enjoyed.

Cameraman Korey ordered the gyro platter with fries and a large soda ($10.75).  Definitely worth it, the gyro meat is made from lamb and beef and was served on a grilled pita with lettuce, tomatoes, and tzatziki sauce.

The sandwich was well structured and easy to eat; cut into three individually wrapped pieces (I hate sloppy sandwiches that fall all over the place).  This dish is perfect if you’re on the beach and need something quick and healthy. You can also order the gyro with chicken, lowering the calorie count to 500 calories for those of us trying to get our bodies back.  While Korey snapped shots of DJ, I enjoyed a third of his gyro.

We then ordered both the grilled and naked wings ($9.75).  Both were good, but I really preferred the naked wings.  The wing is a little smaller than your typical sports bar, but the taste made up for it; packing an amazing flavor that honestly didn’t need any dipping sauce. (I made a return visit a few days after my initial review, just to get the naked wings.)  The grilled chicken wings were good, but are much better when you dip them in one of the eight sauces.

The new Miami Grill menu offers healthy options for just about everything including grilled fish or hormone-free chicken, salads and fresh-baked multigrain bread, in addition to classic favorites such as burgers. The changes to the layout and menu seem to be paying off because locations that have undergone the renovations and menu revisions are experiencing increases in sales up to 50 percent in some areas.

Apparently, there are plans to expand nationally into different markets with the quick casual concept.  DJ explained that the numbers of stores have increased significantly with the changes he and his partner were able to assist in realizing.

No nasty fast food vibe from this revised concept, especially since you can sit and watch the cooks sauté, grill, fry, and prepare your meal right before your eyes. No microwaving [email protected]#$ either. Brother DJ’s assurances regarding my culinary and service experience were spot on. I wasn’t disappointed at all with the new Miami Grill and will definitely be back.