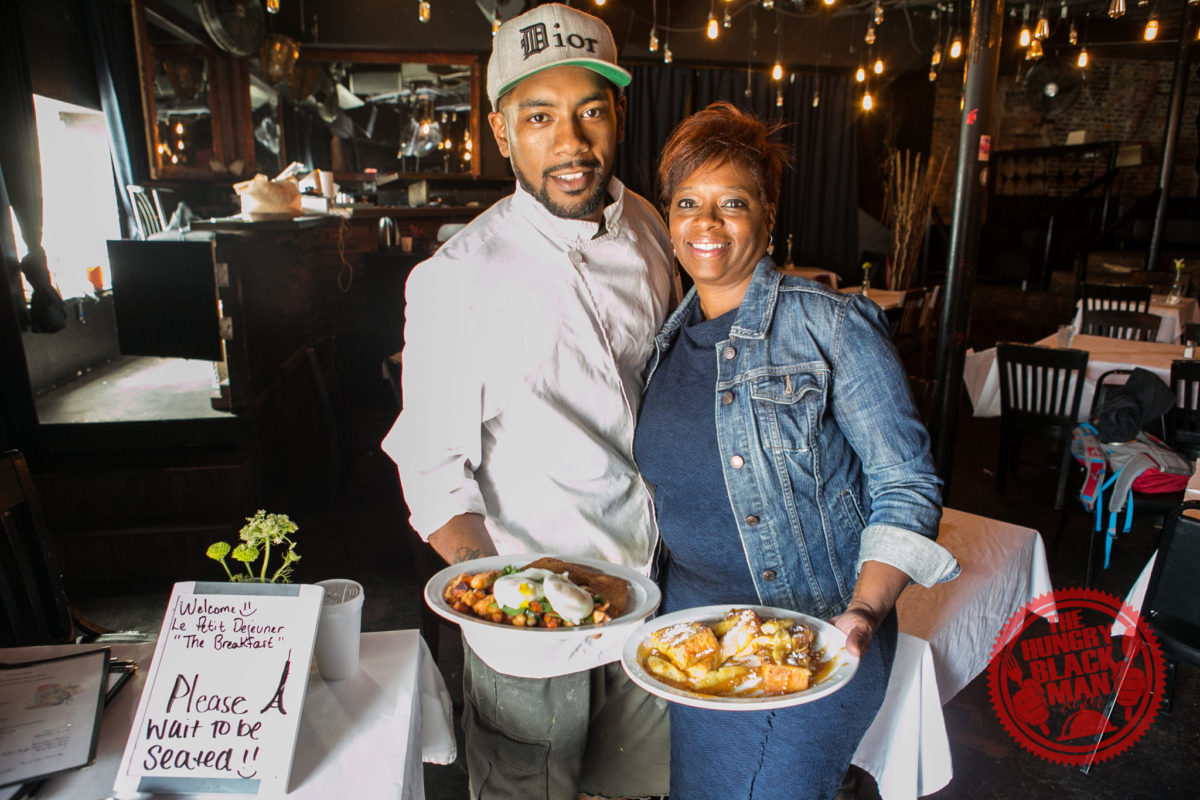 UPDATE! THIS BUSINESS HAS TEMPORARILY CLOSED!

“If cameraman Korey (@KoreyDavisPhotography) doesn’t shoot it, I won’t eat it.”  African-American cuisine has been around for a little over 300 years with its foundation rooted in the food pathways of enslaved Africans bringing various cooking techniques from the motherland and fusing them with European traditions and culinary styles.   Yeah, that’s right, Black people technically started North America’s popular culinary food fusion movement.

One of the earliest trailblazers of this fusion was James Hemings (brother of Sally Hemings); a master of French cooking and former slave of Thomas Jefferson (yeah, the past President owned slaves and apparently had plenty of children from them as well).  James apprenticed with well-known French caterers and pastry chefs during the late 18th century, where he eventually assumed the role of chef de cuisine in Thomas Jefferson’s kitchen on the Champs-Elysees, earning $48 a year. This brotha was so bad ass that Jefferson granted him his freedom as long as he trained a replacement, which was his brother Peter Hemings.

Just so you know, James Hemings is the reason we have macaroni and cheese a part of our soul food plate (I’ll tell that story in my next review, so make sure you subscribe by visiting www.thehungryblackman.com and like us on Facebook.)

It is in this Black-French tradition that Detroit’s homegrown Tina Motley opened her family style restaurant, Le Petit Dejeuner!  The Miami-based Hungry Black Man team journeyed to Detroit during August in celebration of National Black Business Month, and was blessed to dine at this unique and delicious eatery. Located inside Grand River Avenue’s TV Lounge, Le Petit occupies an under-utilized space at the club. The décor is reminiscent of dining at the Improv Comedy Club, with its darkened interior and multileveled seating.

Tables are draped in elegant white table cloths, and natural lighting illuminating the darkened space creates a “top of the morning to you” feel.  Before ordering, we had to ask how the restaurant derived its name. Mrs. Motley explained that her two fluent-in-French children participated in a foreign student exchange program where a French teenager lived with her family. When the young lady asked about breakfast in French, Mrs. Motley said, “The words sounded so beautiful coming from this sweet girl that I named my restaurant “The Breakfast” in French.

The menu offers family-style sized dishes to share, depending on the number of people in your group.  You can also order individually, but my greedy fat ass used the family-style as an excuse to indulge.  The family-style offerings are also great for foodies, who usually travel in packs like wolves.  And the prices are easy on the wallet, especially because of the high quality and large portions of each dish.

I started off with the Caramelized Banana French Toast ($6.00) which is now included, by far, as one of my top 5 French Toasts of 2016! Its deliciousness begins with the fresh baked Challah bread locally sourced from Avalon Bakery, a local kosher bakery. Seems like the bread was made just for this dish, because in addition to being extremely soft, it also had a perfect crisp on the edges that acted as a boarder for the savory sweet caramel syrup like drizzle that created a unification of flavors so good, I was tearing up.  Nobody realized I was in my feelings because I played it off, pretending I had allergies. If you are a French Toast snob, bring your ass here because you will not be disappointed.

Next, I ordered the fried chicken wings ($4.50). Now, if you’re thinking ‘it’s just fried chicken wings,’ you couldn’t be more wrong!  These wings were seasoned using a secret in-house mix created by head chef DeAndre Woods, who could pass for a wizard based on the taste of the magical dishes coming out of the kitchen. The wings were fried to golden brown perfection and had a quality crunch that included both the succulent meaty taste you get at home when “momma dem” fry up some wings, along with the restaurant quality batter you can’t seem to quite replicate when cooking at home, well at least I can’t.

According to Black people’s standards for fried chicken, this would be about an 8 ½ out of 10.  You can’t go wrong with this one. I was just mad that the portion was a little small because I wanted a whole hen fried. Maybe you can ask them to fry a whole hen for you. I will definitely ask the next time I visit. I know you can get an additional wing for $1.50, so in that case you should definitely get more wings, because three isn’t enough.  You will definitely want more.

After realizing my fellow patrons were laughing at my unwitting depiction of a Black man loudly loving on some fried chicken, I moved on to a more healthy option. My momentary sadness from being made fun of turned to instant happiness when the delightful Salmon Hash ($15) came out the kitchen sporting sautéed Alaskan Salmon with sweet potatoes atop with a fried egg.  This hearty dish was delicious and great for those of you who want to pretend you’re healthy when you eat out, but then go home and fry chicken with Oreo crust smothered with butter pecan ice cream gravy, sitting on your couch in the dark watching reruns of Power.  Thankfully, this dish doesn’t taste health conscious. Every bite was sautéed and seasoned well, while the salmon filet remaining moist and tender.  Come to think of it, this is an excellent pre workout meal if you’re going to the gym later. Packed with protein and healthy carbs!

I decided to give our vegan and vegetarian peeps a little taste of something here, so I ordered a vegetarian sausage patty made from black beans ($4).   No slight to Cameraman Korey, the best in the business, but this photo doesn’t give these patties justice.  The tasty patties were so good they deserve a Food and Wine magazine photo spread. Deliciousness withstanding, these circular no meat rounds were as healthy as you can get and a wonderful vegetarian option to eating an animal based sausage.  In the future, I will order a veggie omelet to accompany this.  Or maybe even ask if the black bean sausages can be used in creating an omelet.  Yeah, that would be tremendous.  If you happen to order them, be sure to dip it in the homemade salsa served on the side for a nice tang.  I like tang.

At this junction, I’m done putting on, so I ordered the bottomless mimosa ($12) to calm my now full stomach.  Being from Miami, mimosas are equivalent to breathing.  Miami has some of the best mimosas spots in the United States. Having a great reference point, I took a couple sips, and must admit the mimosa wasn’t quite Miami standard, but it was still pretty good.  Though the taste wasn’t Miami, the potency definitely was!   If you order two of these beauties, you should definitely have that “nice” feeling after responsibly enjoying each glass.  I downed two, and was as happy as I could be.  For me, that was a huge plus in making a return trip, in addition to the restaurant having a full bar available if you want to get a little more tunrt during brunch.

Following my drunken escapade, I started to yearn for their fabled corn pancakes, but there were one more dish that caught my eye—the shrimp and grits.  The shrimp and grits ($10) were very tasty and the gravy held everything together for a union of New Orleans flavor.  I love New Orleans, and this dish brought me back to my college years where I would go to Mardi Gras and eat until I couldn’t move.  It was just enough spice to give you a Cajun dab, while maintaining the delicate balance of buttery southern grits.  This is a MUST HAVE if you have the chance to stop in.

Now for the big kahuna—their world famous CORN PANCAKES ($6)!  Not an arepa, but an actual breakfast pancake made from corn. Again, this photo DOES NOT give these pancakes justice.  YOU MUST HAVE THESE if you find yourself in the Detroit area!  They are absolutely delicious.  Although you don’t really need syrup, it’s nice to know this place ships its syrup all the way from Vermont.  (I joked with the owner that she could just walk across the street to Canada to get maple syrup from the source, but she is a true American entrepreneur.)  I drizzled the hell out of these pancakes and topped it with a huge square of butter because I’m a mothaf%$&#@ BOSS!

The corn pancakes are a family recipe passed down from the owner’s late Aunt who had a profound influence on her life.  Soft, moist, sweet, and balanced is the best way to describe the incredible short stack with the right amount of crisp on the edges, is what really made them stand out.   I honestly couldn’t give you a reference point in comparing them to other pancakes especially if your reference point is Cracker Barrel and IHOP; these pancakes taste NOTHING like that. There is a place we reviewed that could have a similar taste at Sweet Potato Sensations, but that’s about it.  These pancakes were unique, delicious, and sweet.  As I attempt to convey their goodness, I am literally salivating at this computer.

Overall this place is definitely worth a visit. It has amazing food, great customer service, generous potions and affordable pricing.  The atmosphere is young and teetering on the hipster side, but is definitely family friendly and a great spot to go following church. I would recommend this place to anyone who wants classic French brunch items with a soulful twist!  Look out for my next review on Cutter’s Bar and Lounge in the magical City of Detroit. If you don’t know, Detroit is a Foodie’s paradise. Especially if your’re interested in supporting Black, Brown, and Female owned establishments!  Can’t wait to go back!

Atmosphere Hispter friendly 80’s looking dining room that has character without lapsing into exotic tropes. Servers are nice and sweet with a family atmosphere.

Price $ (affordable) and great for groups

Wheelchair Access A ramp descends to the dining room and accessible restrooms.