Visit the only Soul Food Restaurant in Stone Mountain, Georgia 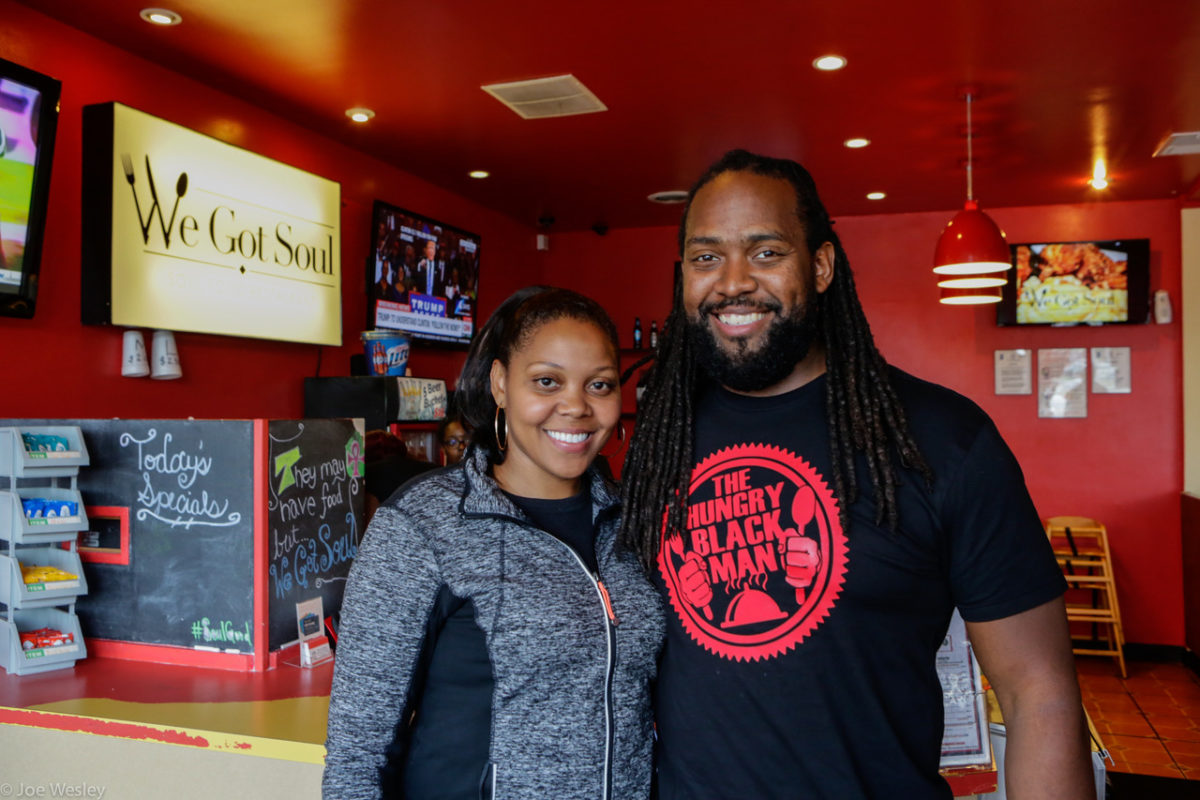 If you haven’t seen the new FX Show “Atlanta,” stop reading and go watch the first episode NOW. It is one of fall’s best shows. I’m such a fan, I convinced the Hungry Black Man team to take a weekend Foodie Tour to Chocolate City! Our first stop was in Stone Mountain Georgia.

We Got Soul Restaurant, the only soul food restaurant in the city, is located in the heart of Stone Mountain, GA in a shopping plaza off of a main road. Owner and operator Cola Pettiford is excited to be able to provide authentic African-American cuisine to her community and neighborhood.

We were greeted by Ms. Cola brandishing a smile so large it rivals the Joker from Batman!  She and her amazing staff were extremely pleasant.  After a short interview (available below), I got right into eating.  I started with the Fried Turkey Wing dinner ($8.99) with a side of macaroni and cheese and collard greens.  The turkey wing was tasty with a slight lemony zest to it.  It had been fried to meat falling off the bone perfection.  The mac and cheese was a little off, odd since it’s one of their specialties. (I’ll have to do a follow up since Cola acknowledged the less than acceptable taste and that is actually one of her number one sellers.)

The collard greens were acceptable to me, pretty good to everyone else in our group.  Lunch and dinner meals are all served with a sweet cornbread muffin I love to eat with greens because of the bitter/sweet taste they produce.

Cameraman Joe (team fry) and I (team bake) argued about baked vs fried, so I put in an order for the baked Turkey Dinner ($8.99) with White Rice and Lima Beans.  Team Fry won.  The baked turkey was a little on the salty side, but still good, very tender with the meat literally falling off the bone. The rice was plain and the Lima beans were ok. We Got Soul uses NO MEAT to season their veggies, which might explain why it tasted like it was missing a little something.

Next up – Fried Green Tomatoes ($5.99), each fried to a beautiful texture with a well-seasoned crust protecting the fresh green tomato waiting to burst out.  The flavor had hints of citrus and pepper. There were salty pockets that didn’t detract too much, but were definitely noticeable.  I would probably stick with this as an appetizer.

My FAVORITE dish at this restaurant was the Fried Pork Chop Meal ($8.99) with a side of cabbage and yams.  Listen to what I’m about to tell you, that pork chop was the truth!  A bone in chop seasoned and fried to f$%#%^@ perfection was juicy with amazing flavor. I hate overcooked fried pork chops because they get stiff and rubbery. Well, We Got Soul has pork chop frying down to a freaking science. Their chop was tender and juicy with an amazing citrusy zing to it.  Cola laughed as I ate this thing down to the bone. I was so embarrassed, feeling like a Black Fred Flintstone.

The sides were just as amazing. The cabbage was THE BOMB. Interesting because usually I prefer collard greens but at this spot the cabbage is great. It’s not overcooked, seasoned well with hints of black pepper and even a slight crisp on each leaf.  The yams were nice and sweet cooked perfectly. Apparently, the Fried Chicken is made in the same fashion but I was way too full to indulge.

My glass of wine, Yellow Tail Chardonnay ($4.99), had a nice initial citrusy taste, but quickly blended into a nice smooth buttery texture with hints of vanilla. The perfect selection for my meal because it complimented the slight citrusy, peppery crust of the fried pork chop and the sweetness of the yams.

The interior of the restaurant is decorated with large drapery adorning the windows with diner style booths in addition to being extremely clean with a large projector showing an NFL game. The beer and wine selection decent with a small plate for watching the game.

Although stuffed, I had a little room for dessert. I ordered a medium peach cobbler ($3.75); which is all about the crust for me.  We Got Soul did not disappoint because their crust was the s#$%.  Still, I needed more of it, so on my next visit I will request two layers. I think you should do the same if you plan a visit. The crust was wonderfully flaky, tender, and baked to a beautiful golden brown, with crystallized sugar on top. The filling and peaches could have been a little better, but the crust made up for it. It is an acquired skill to make good crust, and We Got Soul definitely possesses it.

We Got Soul receives a 3 ½ stars out of 5. This spot is a good substitution for a family weeknight dinner and a great lunch or early dinner spot on a weekend with family and friends if you happen to be in Stone Mountain. The service and wait staff was helpful, attentive, super sweet and kind.

The owner managed her establishment efficiently and led by example as we observed her busing tables after our interview.  Only open about a year, Cola has an exciting vision for her restaurant and I anticipate them becoming increasingly better. I will definitely be back for the pork chops, turkey wings, cabbage, and yams.  Definitely a place worth visiting if you find yourself in Klan territory, I mean Stone Mountain. The restaurant is located at 5210 Stone Mountain Hwy, Stone Mountain, GA 30087 and their phone number is (770) 413-4213. Please subscribe to our blog, and like The Hungry Black Man on Facebook and follow us on Instagram!

Check out the video below: