Detroit Black Woman In Fear of Her Life From Creating Burger Too Delicious! 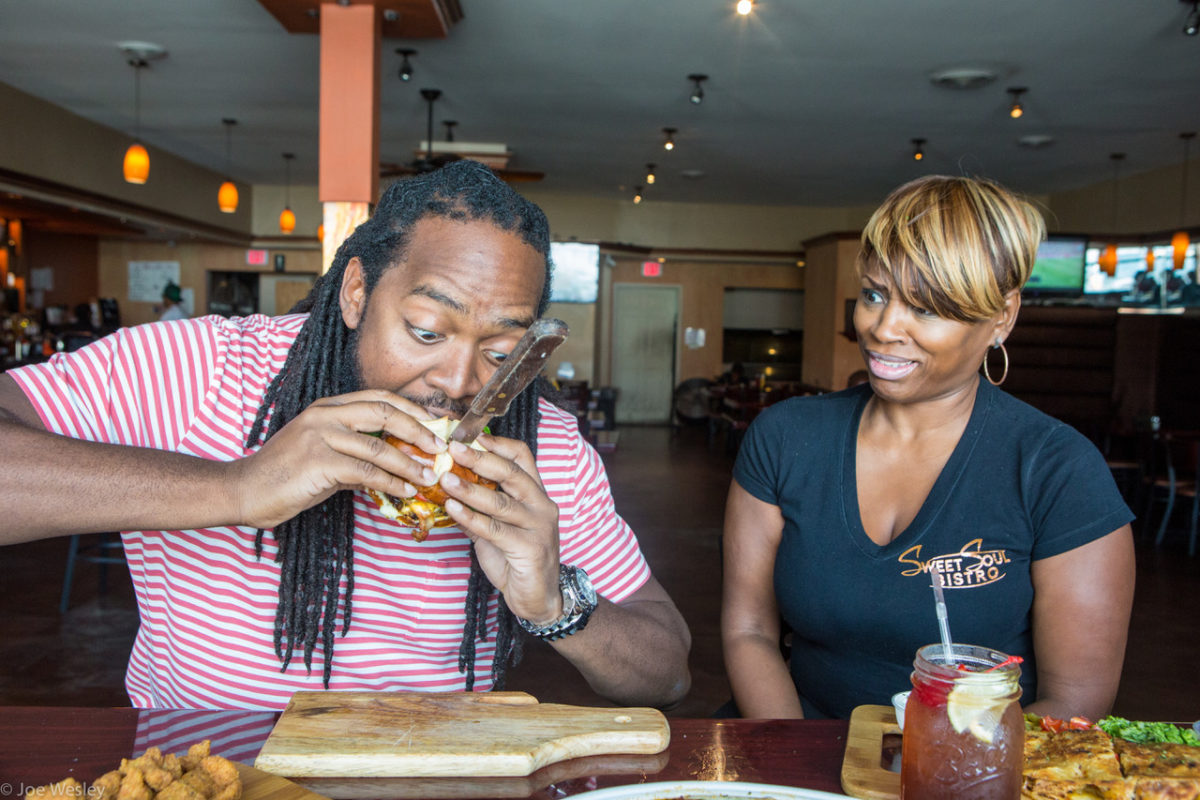 This Miami boy can’t get enough of Detroit’s amazing food scene.  I honestly am falling in love with this city. The Hungry Black Man team decided to gear up, so Cameraman Joe and I headed back in search of amazing food!

This time we stumbled on Sweet Soul Bistro!  This hidden gem is inconspicuously nestled right off a main road located at 13741 W McNichols Rd, Detroit, MI 48235 in an up and coming neighborhood, thanks to restaurateurs like Ms Toya Green.  A waterfall and a spacious dining room greet you at Sweet Soul Bistro, which has a stage where live music, poetry, and comedy are performed weekly.  Their bar is well stocked with some of your favorite, wines, beers, and spirits; coupled with live entertainment, I had a feeling I was going to enjoy this place.

Proprietor Ms. Toya Green purchased the building a little over a year ago and has spared no expenses in her upgrades. She told Camerman Joe, “At one point, this area was selling lots to folk if they just paid off the delinquent taxes. I saw more in this neighborhood. I saw an opportunity to bring something valuable for the locals and surrounding neighborhoods.”  Her vision has come to fruition because this eatery has some food that will make yo mother$%#&@#$% knees buckle.

I started my experience with a frozen drink cocktail that reminded me of many restaurants along Ocean Drive in Miami Beach.  Let’s just say it was simultaneously delicious and dangerous because it will most definitely sneak up on you. Thank the Lord we were using Uber.  I then ordered a Spiked Tea concoction that was even more serious than the frozen drink. I had reached my happy level and was ready to BRING ON THE FOOD!

I started with an appetizer order of fries and Stevie Wonder Wings that came with a mild sweet and hot barbecue glaze that provided just the right amount of heat and sweet for a delectable experience.  The taste, size, and texture of the chicken let me know that instead of coming from a huge chicken farm, they came from a responsible local grower.  The fries were very tasty, fresh cut potato dusted with a nice garlicky truffle oil that provided an evolving of flavors as you chewed and swallowed. I love when the taste of food evolves the more you chew.

Cat Fish Nuggets were my second appetizer and these little devils were seasoned to perfection and served with a cream based dipping sauce.  I honestly almost ate the whole plank full of them, but Cameraman Joe started encroaching, annoyingly sucking his fingers along the way.

Next up was the Sweet Soul Bistro Burger – the BEST BURGER I HAVE HAD IN DETROIT. Yes, I know Detroit Vegan Soul previously held that distinction, but this was the real deal! (Sorry ladies of DVS, I still love you, but this burger had my caveman spirit awaken.)  The burger was a homemade 100% Angus beef patty with fresh toppings served on a warm pretzel bun.  Yes, this was honestly my favorite thing on the menu. If you visit, pair the fries and the burger together for an epic gastronomic experience.

Moving along, my stomach, which I named “Utter” was pleased, but needed more tribute! He demanded satisfaction, so I placed an order in for the Lamb Chops Meal, which came with collard greens and macaroni and cheese. Who the hell told these people to make this damn food like this? You can’t just keep bringing out hitters over and over. I won’t be considered a critic or food writer if I just like everything!  Sike, yes I can!  This dish was the bomb!  The chops were nice and tender and heavily marinated which gave them a slightly overly seasoned taste at some points, but was welcomed, because I ate the chops with the warm pita bread served alongside with the name of the restaurant branded right into it. That was cool as f$%#@.  The collard greens were definitely Auntie approved (mama approved being the next level of two, and grandma approved being the highest), the macaroni and cheese was not quite Black Thanksgiving worthy, but Black cookout worthy, so still really good.

The next dish was the Shrimp and Grits.  The grits were nice and creamy with a strong salt and butter taste, infused with the creole flavor of the shrimp. I’ve had shrimp and grits at several other Detroit eateries and the only one that could get with Sweet Soul Bistro, is probably Beans and Cornbread. If you are a Shrimp and Grits person, then this is definitely a go to for you. If you’re not, it will definitely convert you into one.

Feeling “Utter’ begin to become almost satisfied, I needed to do something to shock his ass, so he wouldn’t shut the f$%@ down.  Spicing things up a bit in an effort to create more room, I went south of the border and ordered the Sweet Soul Bistro Quesadilla. It looked amazing with cheese melted through and through and huge chopped pieces of chicken breast, cilantro, and onions busting out the sides. Served with sour cream and a side of homemade salsa, Toya Green was showing the f$%@ out with this damn food. I started to get upset with her. Toya, open this S#^% in Miami.  I would probably order the quesadilla as an appetizer when I return on next week. Yes, writing this, I got so f%$#@! hungry, I’m coming back next week. Dead ass serious! Here I come, DETROIT!

Next, Toya suggested that I order the Lobster Mac and Cheese.  She was now behaving like one of the Sirens from The Odyssey, luring me and Cameraman Joe into the impending rocks with her enchanting foods.  We need to be careful around this beautiful chocolate lady bringing out this suspiciously good cuisine. The Lobster Mac and Cheese came out with buttery breadcrumbs crusted on top that created a nice barrier for the cheezy seafood goodness that awaited my taste buds.  The dish had such a strong lobster taste infused within the cheese that it pretty much tastes like a lobster and a wheel of cheddar cheese had a baby, and people say to the baby, “damn, you look just like your lobster daddy.” There were chunks of lobster throughout.  Apparently, the strong lobster taste comes from the chef cooking the mac and cheese using lobster stock when boiling the noodles.

Sweet Soul Bistro was a pleasant surprise and I would definitely be making another visit. The staff was extremely courteous and attentive, with the owner serving as manager going from table to table ensuring each table was satisfied.  The interior was grown and sexy with a wood theme throughout. The wood theme is so celebrated that this joint has no plates!  Every dish is served on wooden cedar planks, with the exception of the Shrimp and Grits.  The Hungry Black Man’s Detroit Food Tour was definitely in full effect and we are excited to come again. I applaud Ms. Toya Green for changing the culinary landscape of her community in offering fresh and delicious food. If you are in the Detroit area, Sweet Soul Bistro receives a 10 out of 10 from our team and is HUNGRY BLACK MAN APPROVED!  Like us on Facebook and Follow us on Instagram @thehungryblackman.  You can call for reservation at Sweet Soul Bistro at  (313) 862-7685.