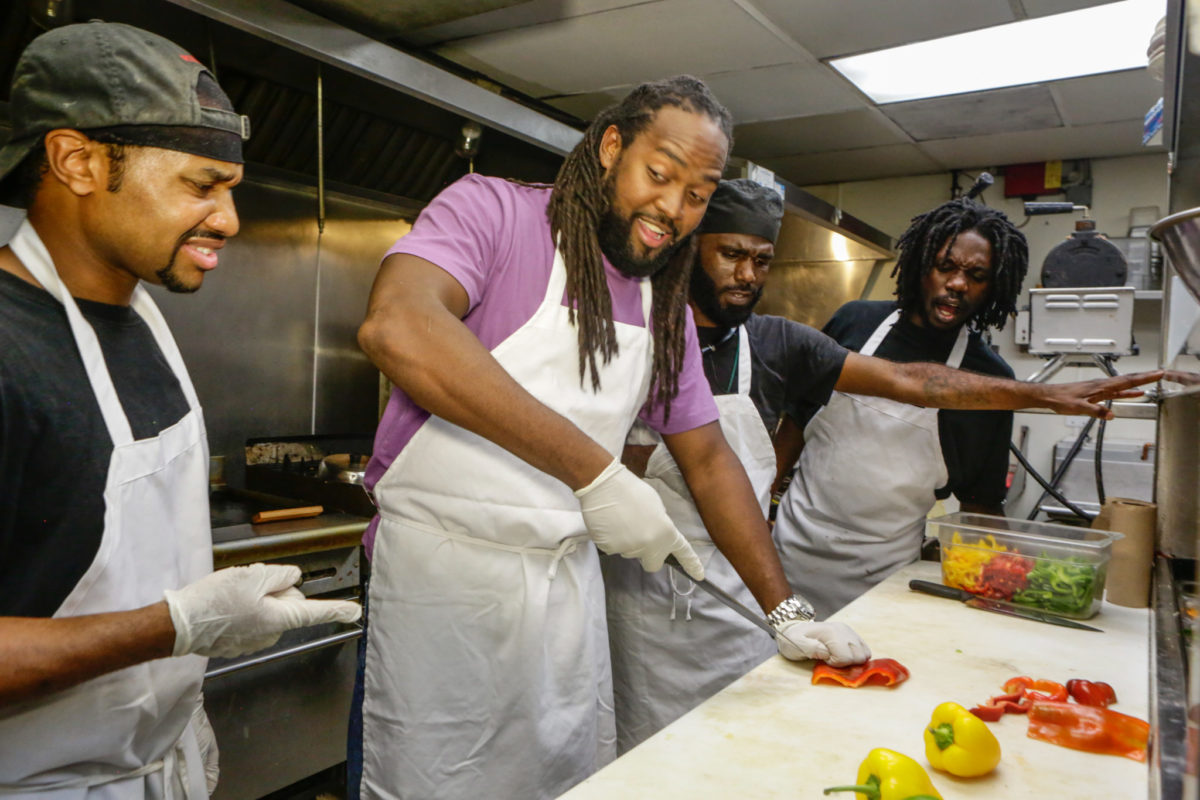 Nobody was interested in chicken and waffles until the West Coast Hip Hop scene started talking about Roscoe’s Chicken and Waffles in movies and television shows. Thanks to hip-hop’s influence, just about every restaurant has Chicken and Waffles these days. Now, you expect restaurants across the nation to create “out of the box” versions introducing everything from strawberries to sugar cane sweetened olives with salted caramel fried chicken and all sorts of craziness.

Well thankfully, New Center Eatery does it right, with over ten (10) flavors of waffle combinations. Detroit is known for chicken and waffles, but I loved this spot’s catfish.  It was as southern as you could get, but we’ll talk about that later.  Owner and serial entrepreneur, Johnny Cannon sat with me and Cameraman Joe and explained that “We are known as the “Original Chicken & Waffles of Detroit.  Nobody was really doing it before us.  We make a mean waffle from scratch. No mixes or pre made anything.  We start from the flour, milk, sugar, eggs, and butter, which is why our customers travel far and wide to dine with us daily.”

Located at 3100 W. Grand Boulevard in Midtown Detroit, this spot is perfect if you are visiting downtown Detroit or catching an art show or concert in Midtown. The first order was the Original Chicken and Waffle ($11), that is served with four nice and tasty fried chicken wings and a delicious Belgian Waffle topped with butter and strawberries.  At first bite, you notice the fluffiness.  A key to fluffy waffles is to separate the egg whites from the yolks before you mix them into your batter. If you like a light and fluffy interior, but slightly crispy, yet soft exterior, you would love the Original Waffle.  The chicken was flavorful and fried to a beautiful Beyonce brown.  I asked for my syrup to be heated before I drenched both the wings and the waffle in the it’s glorious light.

Up next, the Grandma Hudson ($11.75) is a delicious Belgian Waffle infused with fresh apples and caramel, topped with a hot caramel sauce and served with fried boneless chicken breast strips.  Chicken strips were seasoned well and enjoyable, but I prefer the fried fish or the actual chicken wings instead of the strips; which in my opinion are for children. Low key, I get real mad when I see adults, especially adult men eating chicken strips.  Plus, I prefer to eat the chicken off the bone. I’m primal like that.

Next up was the Sexy Kitty’s Red Velvet Waffle and Chicken Wings ($11.75), served with a delicious homemade cream cheese icing. Again, this is another craze sweeping restaurants across the nation because EVERYONE seems to have red velvet something on their menu.  Thankfully, New Center Eatery serves up delicious red velvet waffles and pancakes.  The Red Velvet Pancakes ($6.50) were AMAZING!  Both the waffle and pancakes have all the indicators of a good red velvet creation by possessing a nice soft interior, with a slightly chocolatey after taste in addition to a rich buttery consistency that melts in your mouth.  The absolutely delicious pancake was my favorite out of the breakfast breads. The Red Velvet Pancakes are a MUST HAVE.

As I visited other restaurants as a part of the Detroit Food Tour, I began noticing many of them carried Turkey Chops on their menu.  I’ve had about 4 turkey chops from 4 different restaurants and I was compelled to try the ones here. I ordered the Fried Turkey Chop dinner at ($13.50), and the Barbecue Turkey Rib Dinner ($14.50).  The fried chop was served with a side of collard greens and mash potatoes with gravy, and the barbecued turkey rib came with risotto style rice and broccoli.  Each side was tasty, but the mash potatoes were my favorite.  The greens could have been a little better, but were still acceptable.  The risotto style rice had a nice flavor, but the texture lacked consistency; while the broccoli was steamed and seasoned well with a nice non soggy texture.  Each dish was served with a yummy semi-sweet cornbread muffin.  The barbecue turkey rib was smothered with an amazing barbecue sauce that had a great balance of saltiness, sweet, and a slight heat.  The turkey rib was nice and tender, and flavorful.

Feeling my southern palate begin to awaken, I put in an order of the Yellow Cornmeal Encrusted Catfish ($13.50) with a side of fried green tomatoes and coleslaw. What a great decision!  The catfish was excellent. It wasn’t too salty, and the batter was made in-house. I really appreciate homemade batter for fried proteins, especially fish, because it’s nostalgic. It takes me back to those days of traveling to the Everglades and catching huge catfish with my Grandma and watching her batter them up in her homemade cornmeal mix and tossing them into a huge pot of scalding melted Crisco lard. The aromatics created from that battered fish hitting the grease were the best! Lord have mercy! I miss my Grandma, but this place came close. The fried green tomatoes were nice and tender, with each tomato keeping its texture, taste, and consistency by being cooked through and through.  The texture of fried green tomatoes is almost as important to the taste; in this case, both were great.

Wanting to try on of their wraps, I selected a Chicken Caesar Wrap ($7.50) that came with well-seasoned grilled chicken, lettuce, Caesar dressing and Parmesan cheese.  You can choose either grilled or fried chicken, but I felt that I needed to calm down off all the fried foods, so I settled for grilled. I chose the very satisfying roasted potatoes with my wrap, which is a great on the go selection, but I wouldn’t order it to dine in.  There are just too many great menu options to settle for a wrap – even though it was short, simple, and sweet. Nothing amazing, just a tasty wrap with well-seasoned roasted potato wedges.

The final entrée was Steak Bites ($11.95), which came with black end steak, tri color peppers, onions, mushrooms w/choice of rice & served with grilled pita. This dish was very enjoyable. Each succulent steak bite paired well with the onions and the peppers; creating a welcomed sweetness to the dish that balanced the saltiness of the steak. Incorporating these two together with the rice reminded me of Cuban cuisine.  I obviously have had my fair share of Cuban cuisine in Miami, so this dish was extremely familiar. I’m not sure why there is pita bread, but it was good as well. So I just packed my ass with carbs by stacking the little pitas with heaps of steak, rice, onions, and peppers!  Loved each bite!

Finally, I had a smorgasbord of desserts that included baked pastries and cheesecakes.  Each dessert was sourced from a local artisanal bakery.  Each of these treats were amazing, with the cheesecakes being my favorites.

New Center Eatery is definitely one of my new favorite spots to visit when I’m in downtown or midtown Detroit. The staff and the owner were simply wonderful.  I enjoyed them so much, that our team journeyed back to Detroit from Miami to record skits for our pilot food show.  Yep, you heard right, The Hungry Black Man Show!   We’re traveling the nation and bringing exposure to the wonderful culinary traditions and food pathways of Black folk and people of color! I even had the opportunity to show Mr. Archer’s culinary team my cutting skills in my attempts to recreate their delicious steak bite dish.