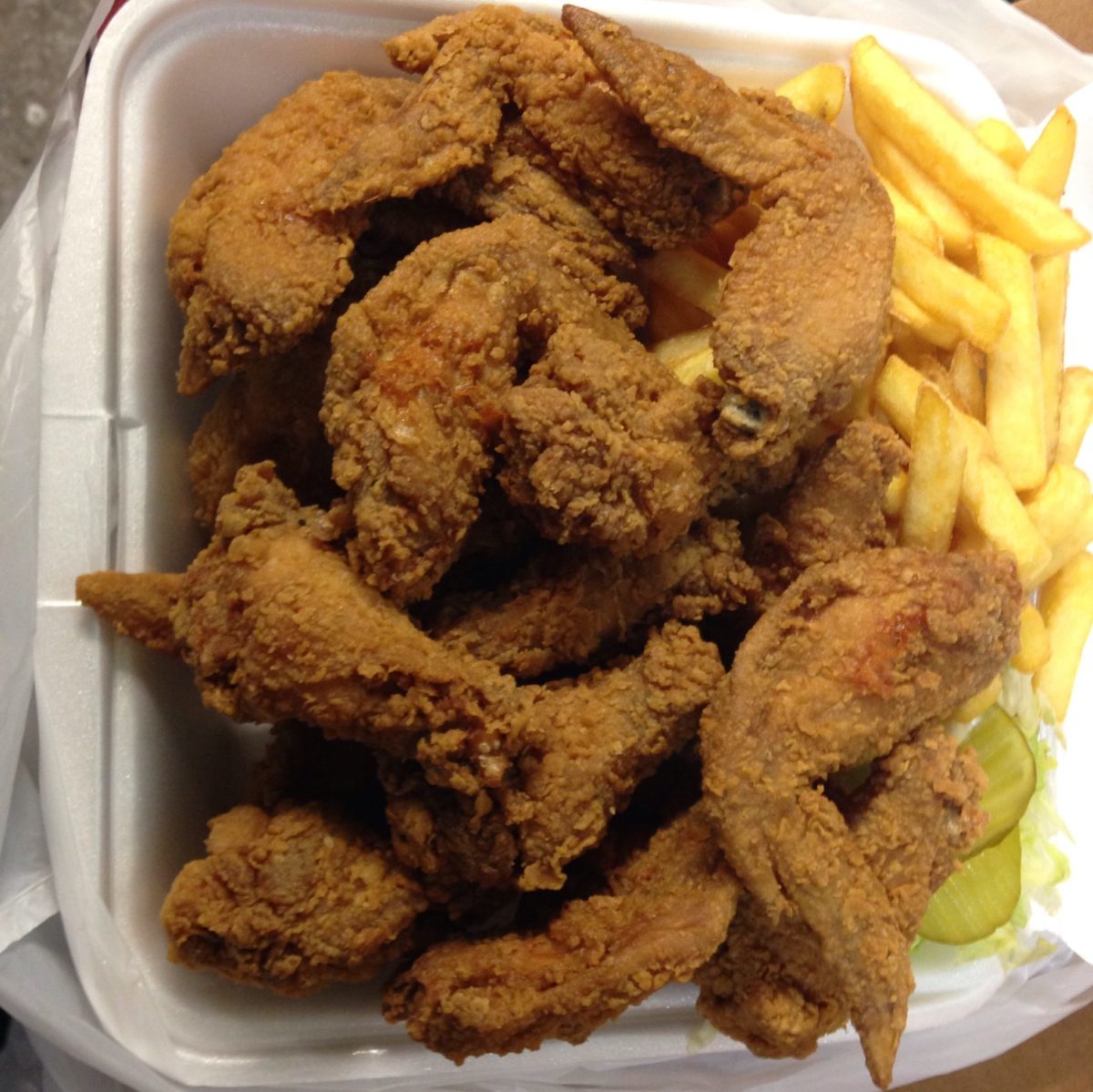 Manchu, also called Man, refers to people who lived for many centuries mainly in Manchuria (now Northeast China) and adjacent areas of China and who in the 17th century conquered China and ruled for more than 250 years.  However, in New Orleans, Louisiana Manchu is simply a corner store serving amazing fried chicken and delicious Chinese Fried Rice!  I randomly stumbled on this hood ass spot in New Orleans, while on The Hungry Black Man foodie tour.  A friend suggested I stop by this place and try their chicken. Leaving the French Quarter, I plugged the address in my IPhone and was on my way. Upon arrival, there were some drunks hanging outside the spot and a guy who sold me some bootleg CD’s along with a giant party bus across the street with people twerking in the middle of a busy underpass. Yeah, this was my kind of spot.

I entered the convenience store (yes, this place is in an f#$%@*# convenience store) and was met by a large group of people waiting in line.  A Chinese man was screaming order numbers on a microphone while customers waited patiently for their food.  I walked up to the window to place an order of 20 wings and a side of fries for only $11.00. This place was cheap as hell. I was honestly shocked at how low the prices were.  As the guy kept screaming over the microphone I spoke to a couple of folk waiting on their food and was told the place is really good. I was skeptical, because it is literally a hood convenience store with a Chinese guy, at this point screaming so loudly, his thick accent prevented me from understanding a word he was saying. Before I knew it, he was banging on the bullet proof glass ordering window pointing at me.  I went over and he handed me my food in a Little Caesars Pizza plastic bag. I told you the s$#% was Hood. Stop playing. You know good and well you use plastic bags for all type of s$#@.

Leaving the store I honestly didn’t know how to feel.  I sat down, opened the take out tray, took a bite out of a chicken wing, and my taste buds were PLEASED. How the hell did this Chinese convenience store capture the essence of Black Creole Fried Chicken? I mean, this s#[email protected] was good as f$#%.  You can bring $20.00 to this spot and leave with a boat load of chicken, fries, fried rice, you name it. The chicken tasted like Popeye’s Chicken on steroids. Each piece was spicy, but not overbearing with a nice consistent heat that lasted throughout each chew. I now know the Chinese gentleman frying this delicious chicken was really a Black Grandmother reincarnated from the 19th century. I mean, there is no other explanation for how good this chicken was.

Overall this place has some of the best fried chicken in New Orleans.  The downside is that you will more than likely encounter standard hood s$#% that goes with being in the hood. It’s all worth it though. I’m totally fine with hood spots, so it doesn’t bother me at all. However, if you’re bougie, make sure you go during the day. I will literally go to this spot every time I visit New Orleans. Definitely worth it and it receives The Hungry Black Man Approval!  Oh yeah, the food comes out in lighting speed, so wait time is almost non existent, even if you see a ton of people inside.