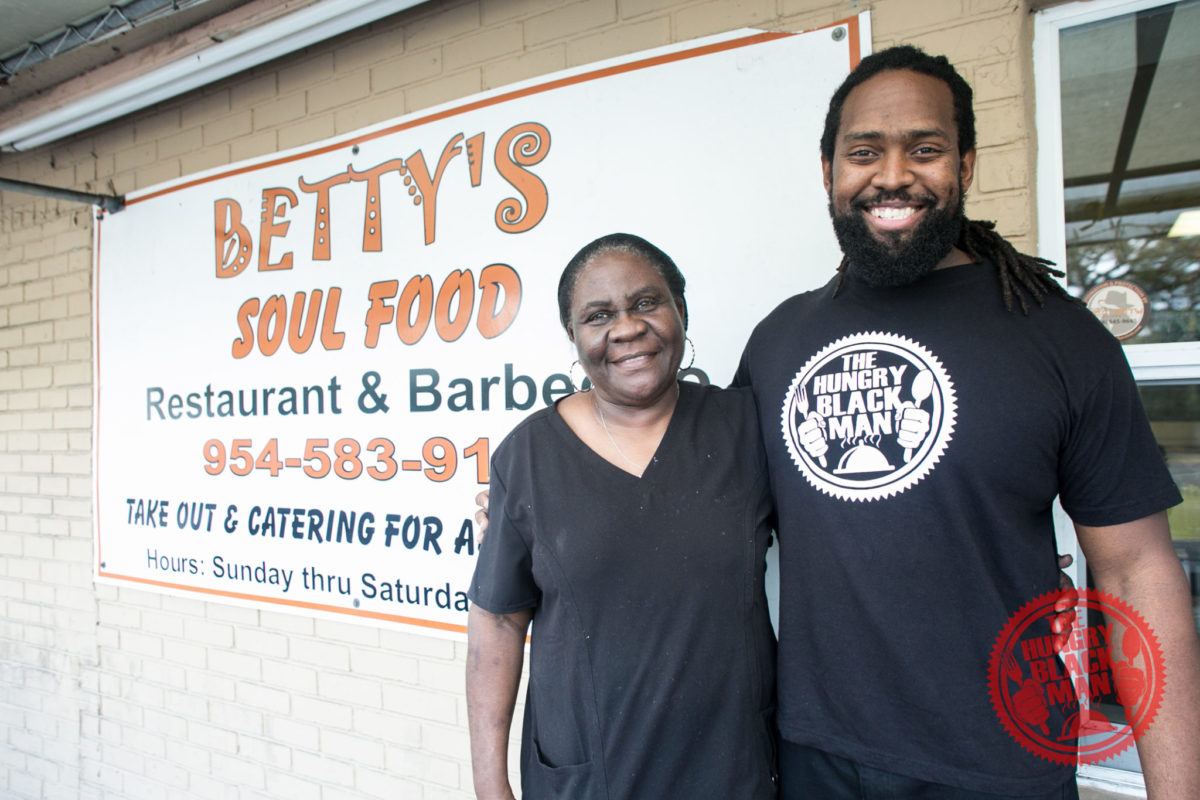 Fort Lauderdale is shaping up to have a pretty decent food scene.  Specifically, Broward in general is whipping Miami-Dade County’s ass in food destinations, especially when it comes to Black and Female owned eateries.  I visited Betty’s Soul Food last weekend and was once again transported to a simpler time when food was made with natual and organic ingredients and prepared with grandmotherly love and dedication

Located at 601 NW 22nd Rd, Fort Lauderdale, FL 33311, Betty’s still has the same iconic diner look and feel from when it opened its doors 40 years ago!  Yes, this restaurant is 40 years old!  As we devoured a smorgasbord of delicious swine, cakes, mac and cheese and did I mention CAKES, I sat on top-rounded cushioned seats at the bar next to a local pastor who was giving me some of her most memorable childhood moments at Betty’s.

Intergenerational patrons were strolling in like a revolving door ordering take out and dining in just the same.  One of the sweetest people I’ve ever met, Mrs. Betty greeted everyone.  My dining experience turned into a life lesson as I observed her handle a customer who was obviously just trying to get free food by complaining about insignificant things. It was pure grace, appreciation, and wisdom in action.

The feast began with my beloved swine. My palate is extremely versatile and I have been on a vegetarian and vegan streak lately, but as my mother would say, I backslid and must admit I’m loving it!  My first plate I ate too quickly, but it was the Pig Tail Dinner ($8.50) with white rice, extra gravy, and a side of mac and cheese and cabbage.  Good God Almighty! This $#%@ was just spectacular.  If you’re a pork lover, Betty’s is the place for you. It’s so good I went HAM, get it? I was eating pork and went HAM on ordering pork.  I have to stop with my dangerous levels of comedy.

The mac and cheese was the best side by far. It had all the identifiers for classic African-American and Black Thanksgiving approved mac and cheese. A creamy and cheesy interior with the noodles cooked to the exact softness and hints of butter and salt massaging their way through the dish only for the cheddar cheese to burst through it all with its tart, yet balanced mild flavor.

Then there was the cabbage!  It was cooked well with each cabbage leaf having a soft texture from being thoroughly cooked.  A nice smoke meat flavor graced each leaf along with salt and pepper for a classic grandma taste not giving a damn about healthy alternatives. For me it was a little too cooked. I like my cabbage with a slight crunch.

Next, the rice was pretty standard, nothing special, but topped with any gravy totally transforms the side to a more enjoyable item! If you order a meal, ask for a gravy of your choice for the rice and you will not regret it, I promise!

The cornbread was a little bland and not something to be eaten solo, but it’s decent if you just want to eat it alongside your cabbage or collard greens.  Honestly, I wouldn’t order the cornbread here.  The show stopper was the potato salad, a perfect balance of sweet and salty with just the right hint of vinegary spice that is definitely a MUST HAVE! Lord have mercy, it’s the dish that would have everyone at Thanksgiving or the Family Reunion asking “who made the potato salad?”  Yes, it is FIE!  I had two servings because I am unashamed of my stomach and his wants.

Then there were the candied yams.  They were pretty standard with sweet with hints of cinnamon, maple and a possible nutmeg taste that was expected.  The texture was nice and firm with an appropriate level of softness.  I probably wouldn’t order the yams again.

Finally, the collard greens were standard; each leaf cooked to Black Cookout standard, but NOT BLACK THANKSGIVING!  Hillary Clinton apparently dined at this establishment during her 2016 presidential pandering campaign and left her bottle of hot sauce under the seat, so I called her up and she allowed me to get a couple dabs.  I was very appreciative, as these greens benefited greatly from a tad bit of hot sauce or vinegar. Which one are you? Team Hot Sauce or Team Vinegar?  However, I wouldn’t order the collards here as a side. I would stick to the mac and cheese, cabbage, and a rice with gravy.

Now for the entrees!  I will begin with my precious swine!  You know, I am sick of people talking so much $#%@ bout pork. There is NOTHING UNHEALTHY ABOUT PORK! Like seriously. Just don’t eat the fatty parts if you want to watch your cholesterol. That’s literally it.  Pork has been in the African diet for thousands of years and we were some of, if not the longest living people on the planet. So there!

The BBQ Rib Dinner ($11.99) was ok. The ribs were cooked to a decent texture, not quite falling of the bone, but the meat was tender and had a tasty flavor.  The sauce was also pretty good. If you’re in the mood for ribs, this may satisfy your craving, but don’t expect the side of the road barbecue standard, that may be a better option if your craving Black Family Reunion level ribs.

Next was the Chitterlings Dinner ($9.99).  The Chitterlings were cleaned well and the texture was pretty good. I was expecting a little more flavor, but they were acceptable with once again, a little help from Hillary. The Ham Hocks were exactly what I expected.  I mean, simply delicious. Each massive hock was cooked to a smoked perfection with each tender bite!  I would definitely order again.

As mentioned before, the Pig Tail Dinner was a MUST have!  Continuing my SWINE FEAST, I had the quintessential Smothered Pork Chop Dinner ($9.99), this is definitely a cheat day meal! Each chop was fried to perfection and smothered in gravy that had a slight Salisbury Steak quality when you initially bit into it, but then quickly subsided to a low country gravy taste on top of a well-seasoned pork chop.  Another MUST HAVE!

Finally on the PORK FRENZY, I ordered a bowl of Pork Souse ($5.00), which was more like a flavorful stew, but on the salty side.  I probably wouldn’t order it again.

I needed to come down from eating so much pork, so I ordered the Whole Fried Fish Dinner ($9.99).  The mix is an in-house made batter which created a natural and fresh tasting fish. I would definitely get the catfish on my next visit, as it was seasoned well and fried to a balanced crisp.

Eating the catfish put my mind in the mood for breakfast. I ordered the Chicken and Waffle Meal ($10.00).  THIS WAFFLE WAS OFF THE DAMN CHAIN!  A homemade waffle with fried chicken is all you need in life. Seriously, what else do you want? This waffle had a hearty buttery taste with great texture of crusty and softness battling it out and eventually signing a treaty for a spectacular balance.  The chicken was a little bland and could use some gravy, so I would request it to be smothered next time. By itself, it had a very mild taste, but the texture was a perfectly crisp exterior with a beautiful golden brown color.

Continuing the breakfast vibe, I ordered the Breakfast Bacon with Home Fries and 2 Fried Eggs ($7.00)!  MUST HAVE! Apparently, Betty’s is known for breakfast, but my dumb ass went for dinner and there were very little items left for me to order off the breakfast menu, especially the HOMEMADE BISCUITS, which are made early in the morning by none other than Grandma Betty herself.  The customers were raving about them. The restaurant runs out of them almost as soon as they are made so come early if you want to try them.

Getting back on the dinner and lunch wheel, I had my godson with me and he wanted to order a burger so I did, and I ate it for him. His grades are bad, so no burger for him, he gets cream of wheat. The Betty Burger w/ Cheese ($5.00) was quintessentially Black – grilled beef patty between two pieces of white sandwich bread with lettuce, tomato, and melted cheese. This is definitely one of the simple but delicious options on the menu for your kids.  Served with a side of deliciously salted fries, I know it sounds crazy, but it is a MUST HAVE. I am thankful for my decision to be a good Godfather and stand my ground.

Finally the desserts!  Cakes, Cakes, Cakes! Each slice is ONLY $3.50! All homemade by a local Black Owned Bakery, these cakes stole the damn show.  Each one was unique and absolutely delicious! BEST CAKES I HAVE HAD IN FORT LAUDERDALE PERIOD! Starting the show was the lemon cake, which I typically hate, but this was my second favorite cake here. The icing was simply delicious and the cake itself was moist, butter, and so soft it melts in your mouth.

The Pound Cake was my absolute favorite. The texture was $%#[email protected]%* PERFECT.  Next, the Caramel Cake!  Lord Have Mercy! This poor cake didn’t even make it quite out of the plate before I started devouring it. The crystallized sugar forming the caramel was excellent allowing my taste buds to enjoy each spec of cream, sugar, butter, and vanilla with each delectable bite! The Chocolate and Red Velvet Cakes were also delicious.  ALL THE CAKES ARE A MUST HAVE, with the Pound Cakes, Lemon Cake, and Caramel Cake being my top 3.

Many of my Broward County friends said that Betty’s was a lot better back in the day. There were some misses, but overall, the Restaurant is worth trying and I will definitely visit again.

Make sure you take the turnpike if you’re coming from Miami-Dade, because the stupid GPS takes you the long way.  Oh, and for drinks THEY HAVE KOOL-AIDE AND IT IS AMAZING!

Ms. Betty is a sweetheart and with the assistance of an amazing and spirited staff, this eatery will definitely be here for another 40 year to come. You can reach them at (954) 583-9121.

Detroit Suburb Has A New Black Owned Eatery and it's $#%#^@ Delicious!