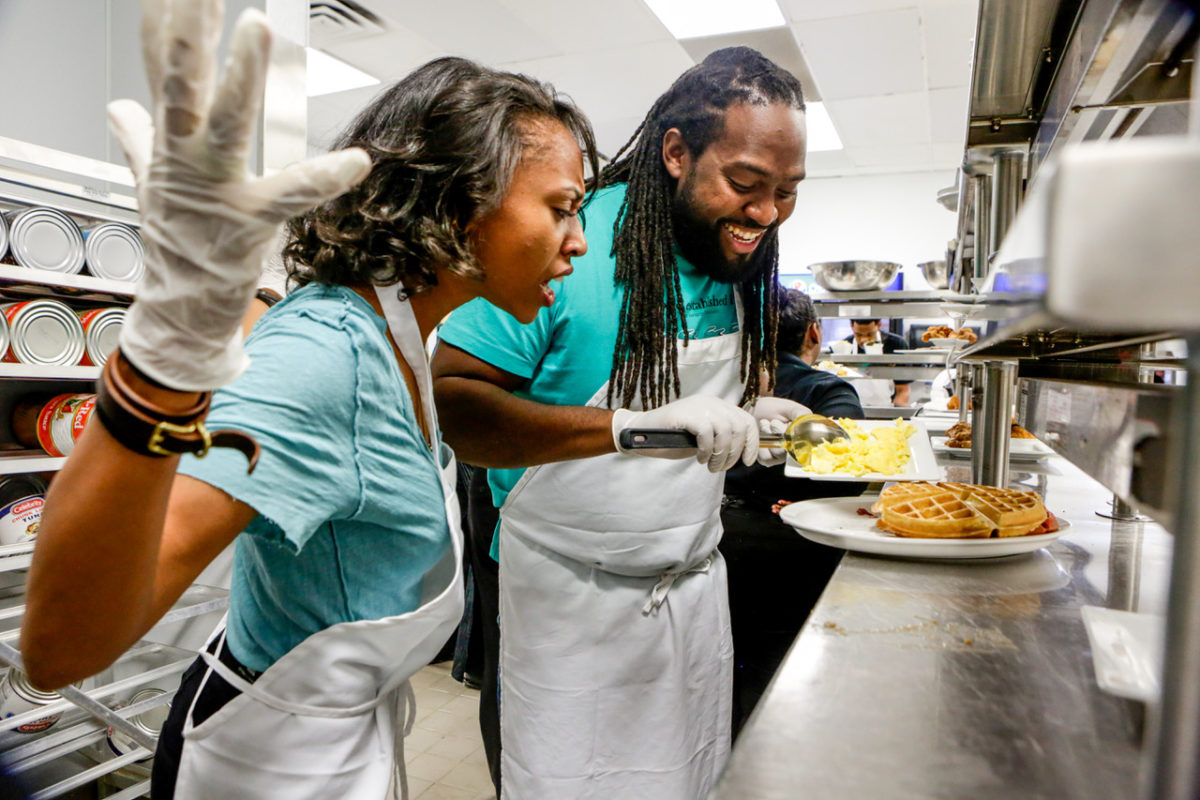 Searching for creative and delicious dishes within Detroit’s Black food ecosystem has become easier and easier.  Cameraman Joe and I visited Sweet Magnolias Restaurant where we were thrilled to encounter the Magnolia’s Southern Omelet ($11.75) with a side of sumptuous Green Fried Tomatoes. This six egg monster omelet infused with collard greens, mac and cheese, on a bed of yams topped with red beans served with homemade pancakes should be #%$^&# illegal.  As you can imagine, flavors were spiraling from savory, salty, and sweet; each bite carried you on a journey through the African Culinary Diaspora for an unforgettable gastronomic experience. I know it looks crazy, but believe me, looks can be deceiving. A MUST HAVE for sure.

The brainchild of Detroit native Carolyn Cannon, Sweet Magnolia’s is known for its Southern innovation. The restaurant is affectionately named after her mother, Magnolia, and committed to a standard of culinary excellence.  Manager and kitchen motivator Lauren Cannon provided our team with a tour of the kitchen, which could have easily been the set of Top Chef. She also introduced us to the joys of waffle making, which resulted in my enjoyment of a delightful, fluffy, and buttery Belgian Waffle with 4 scrumptious pieces of fried chicken wings for $12.25.

Next came the Shrimp and Grits ($14.95) with Parmesan cheese, sautéed onions, butter, and salt, for a harmonic meshing of flavors creating the perfect bedding for 5 char grilled shrimp served with a side of fresh baked and toasted Challah bread. What a magnificent homage to the New Orleans inspired dish.  Another MUST HAVE!

Feeling the New Orleans love, I turned to yet another African-American staple in their Fried Catfish Dinner ($15.95).  Each perfectly golden fried filet provided a window into the love for southern cooking embraced by this culinary team.  The delectable crispy exterior is an in-house creation blending sea salt, bread crumbs, spices and cornmeal. What’s inside is juicy and tender white fish.

Sweet candied yams braised with butter, brown sugar, cinnamon and hints of black pepper and nutmeg were baked to a nice soft, yet firm texture along with classic red beans and rice which, a little added salt, had a great taste.  Oh, and a nice sweet cornbread muffin is served with all entrees.

A healthier alternative to the catfish could be the Grilled Salmon ($18.95) topped with a cranberry cherry reduction and served with a sweet potato puree risotto and asparagus.  Savory, sweet, and salty, when eaten as a collective this dish carries an evolving flavor that can only be described as magical! The salmon was grilled to a tender, yet intact texture, preventing the filet from being too soft, flaky, and falling apart or the other extreme of being tough and chewy.  Another winner and MUST HAVE!

Visiting various Detroit eateries, I had the opportunity to taste turkey ribs.  Now, please don’t think these are actual ribs of a turkey like Cameraman Joe did.  How the hell are you going to eat a damn turkey rib anyway?  That #[email protected]% would be too small. Instead, a turkey rib is created by cutting and boning the bird but including the scapula bone and its associated muscles (meat)which are separated from the turkey carcass.

The BBQ Turkey Rib ($14.95) was tender and juicy, but it was the Memphis style BBQ sauce that truly brought out an incredible flavor.  Each side was enjoyable; however, the corn was the BEST SIDE ON THE MENU.  Seriously, the corn was spectacular. The collard greens needed a little Hillary Clinton magic so yet again, I called her up to borrow her hot sauce bottle. She’s such a good friend to The Hungry Black Man.

Named after an amazing Black woman who was a wife, mother, grandmother, and an extraordinary cook who helped in setting the standard for Southern cuisine and hospitality for decades in Tuscaloosa, Alabama and who has left Detroit with this gastronomically pleasing eatery.

Offering large and spacious seating with cozy booths and large tables, the natural light bursting through the many windows gives the restaurant’s interior a vibrant and inviting feel.  Friendly staff added to already amazing dining experience, which masters southern home-style cooking in the African-American tradition.