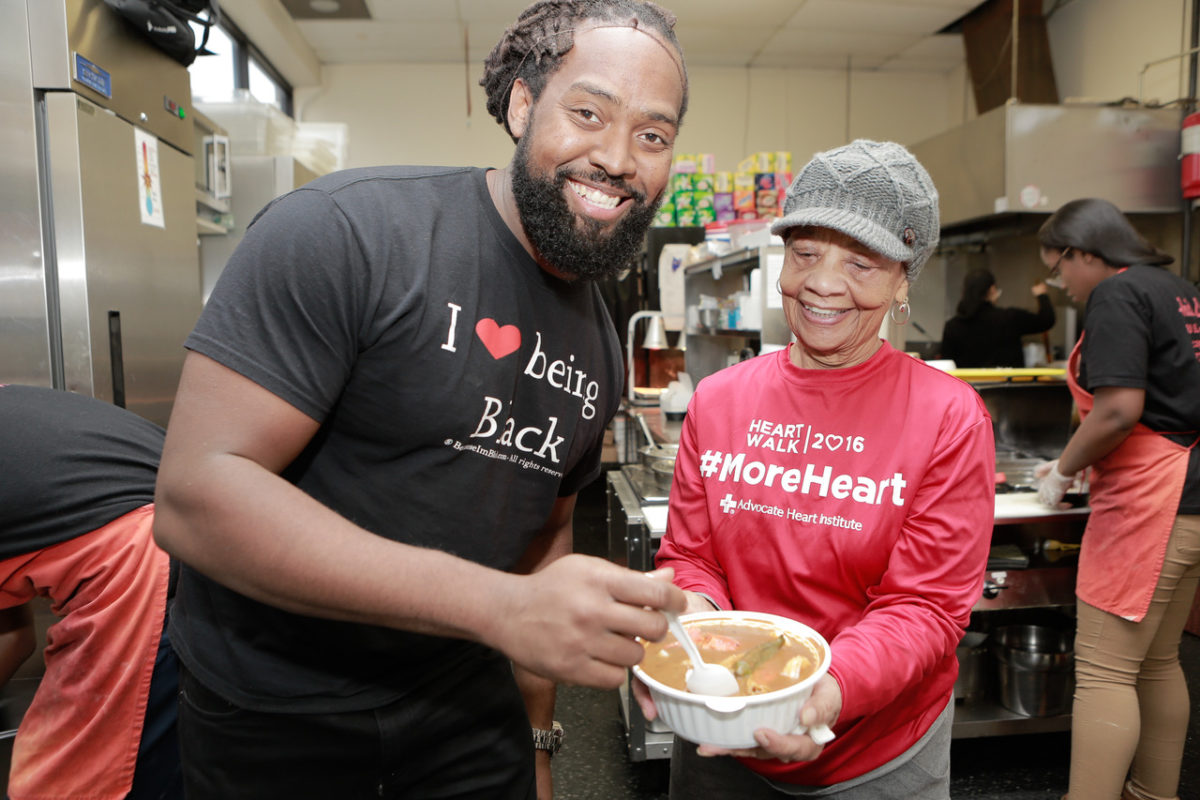 Despite the horrible, hateful, spiteful and bitter cold, we are just loving it here in Chicago. Sip and Savor Coffee Shop got our teamed warmed up for some serious food.  We were on our way to Bear Down Barbecue, but after realizing it was close to 30 minutes away, we looked for something a lot closer for lunch; and planned to visit Bear Down for dinner.

Recently, I gained five pounds when conducting our New Orleans Black Food Tour, so, you can imagine how happy I was to stumble upon a hidden Chicago gem in Anita’s Gumbo, located at 8100 S Stony Island Ave, Chicago, IL 60617. The small take out spot is nestled between two other businesses in a shopping plaza; one of which was a pizza joint with the meanest restaurant logo I’ve ever seen.  The logo includes a cartoon character dressed in stereotypical homeless man clothes, drunk, drinking and spilling a pint of beer. Who does that?

Moving along, we were interested in seeing whether this place could stack up against the gumbo houses of NOLA.  I was a bit skeptical, until Mrs. Anita herself walked out the back of the restaurant. I knew the food was going to be FIE because she was a refined, super mature lady who looked like she has served over 20 years as usher board chair and as chairwoman of the hospitality committee of the 1st Baptist Church of Pentecost who cooked for the likes of T.D. Jakes, Al Sharpton and Jesse Jackson…yeah that type of look!  I am happy to report; I was CORRECT!  Her cooking was EXACTLY WHAT I EXPECTED!  Sweet Jesus this gumbo was the $%#@.

African-American cuisine is quite regional with Gumbo hailing from the gulf region, specifically Louisiana.  We trace Gumbo origins to West African cuisine and over time African-American cooks have incorporated French, Spanish, German and Choctaw culinary influences in various Gumbo cooking styles. Anita’s gumbo was absolutely amazing with a roux so flavorful and spicy that I momentarily forgot I was in Chicago.

Wondering how the word “Gumbo” came to describe this deliciousness, I did a bit of researched and found most historians, academics and chefs agree that the name likely originated from the pronunciation of one of its two main ingredients—okra in the Niger-Congo languages spoken by many slaves from West Africa, the vegetable okra was known as ki ngombo or quingombo. Isn’t Black History just incredible!

Anita’s Gumbo had a nice thick roux with shrimp, scallops, okra and REAL CRAB MEAT; thankfully, because I hate imitation crab meat. Creole gumbo generally contains shellfish, tomatoes, and a dark roux, and in Anita’s case it had it all. You can also order a more Cajun style gumbo with the same amazing roux but instead of seafood, you can order it with chicken, sausage, or go completely vegetarian. Each dish is served in a bowl and comes with rice that soaks up the gumbo for an amazing taste. You can get the Nita’s Signature Gumbo for $10.00 (16 oz.) or $22.00 (32oz). The Cajun Gumbos are cheaper, but I’m bougie as $^#@!, so I got the most expressive, but bowls start at $7.00.

My next and last order was the Gumbo wings ($4.75) for 2 pieces.  Can’t get this anywhere else people. The wings were fried in the New Orleans fashion, tasting like 4 steps up from Popeye’s smothered with Anita’s delicious roux over rice with sausage, chicken, and veggies. God give me strength to continue this journey, because these wings have me so weak. I was on a food high. Like seriously. This little spot is by far the BEST GUMBO in Chicago. Everything about this dish was outstanding. I can’t rave enough on the authenticity of the cuisine here.

Let me put this into perspective: Anita’s Gumbo was not good gumbo for Chicago, but excellent gumbo for NOLA. I informed their manager, that honestly, it was the best gumbo I’ve had outside of NOLA PERIOD, and even better than many spots in NOLA. Additionally, service was quick and polite throughout our entire visit.

I am enjoying my time here in Chicago and can’t wait to visit Anita’s once more. This place receives the Hungry Black Man’s approval. You can reach them at (773) 734-2788 to place an order.

Chicago Suburb BBQ Spot So Good I Paid My Rent In Ribs! #Blackhistorymonth