Kuro Japanese Restaurant is for straight up Bosses! 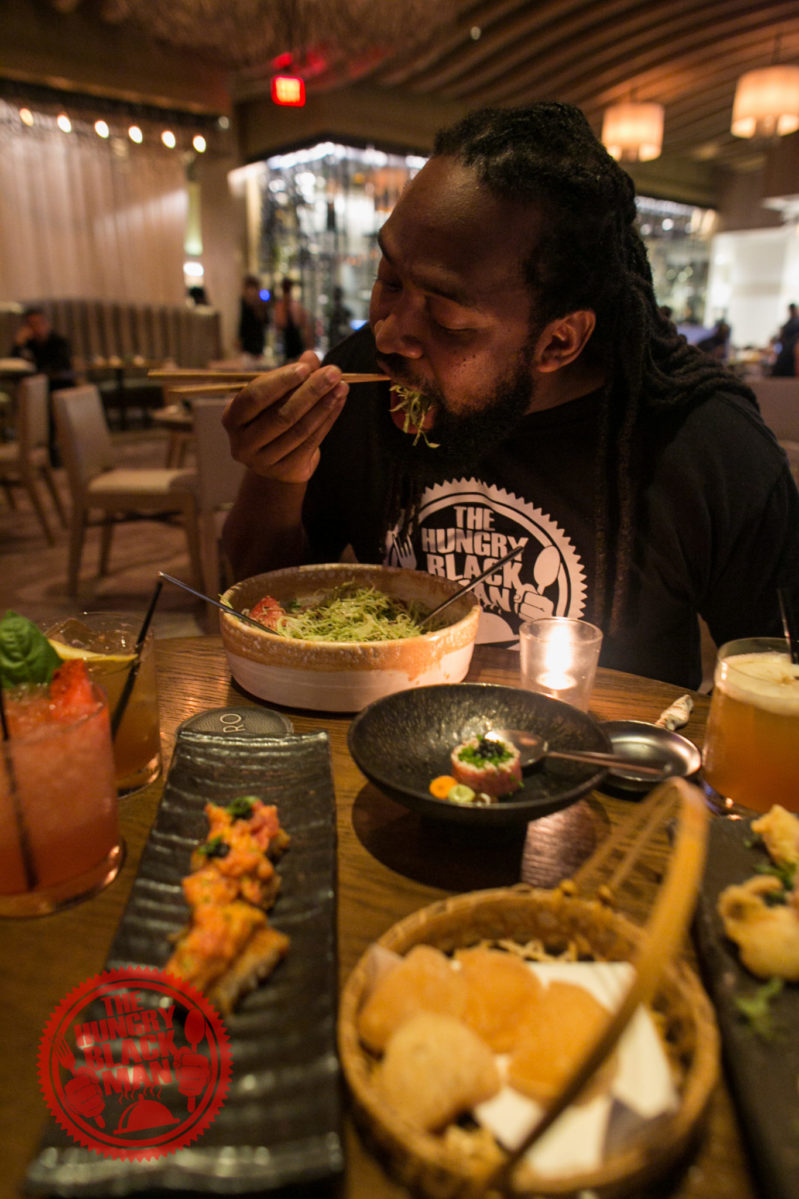 I was not planning to visit the Seminole Hard Rock Casino until I found out that Kuro, a fine dining Kaiseki style Japanese restaurant known for its purity, well-calibrated and multi-course meals, had recently opened within the casino. Camerman Korey decided to coordinate the shots for this review because he wanted to try his luck at the blackjack table (he ended up winning quite a bit).  The styling and décor of this restaurant were nothing short of beautiful.  The ambience literally sets the scene before you sit down.  This place is a post-income tax type of joint, if you catch my drift.

I started my meal with an assortment of Nigiri ($25), and was very pleased. It’s been a lil minute since I had great sushi, and my palate welcomed this delicious assortment of rice, vinegar and fish. The Nigiri is served by fours, so be sure to order a variety.

Next, I moved on to the Lobster Tempura ($27), that was simply glorious.  Now, we know Black folk invented frying over in ancient Nubia/Egypt, but it was the Portuguese who brought the idea of deep-frying fish to Japan – specifically Nagasaki, which was a trading post of Portugal in the 16th century.  I usually don’t thank 16th Century Europeans for much, but this is an exception.  Each piece was crispy and non-greasy. Request some tentsuyu (tempura dipping sauce), to give the lobster a nice kick in flavor.

Moving along, I ordered the Koji Lamb ($27), served with an amazing kabocha croquette.  Koji is essentially rice that’s been inoculated with the koji mold and then combined with water and salt, allowed to ferment, and turning into shio-koji or salt koji; a seemingly magical sauce that thrills cooks with its flavor-boosting abilities.  Because the malted rice assists in decomposes protein, it tenderized the lamb for a more succulent texture while also removing the gamey taste. Each bite of lamb was well seasoned, giving off both sweet and salty notes, with a miso-like aroma.  A MUST HAVE for sure.

A true lover of Japanese cuisine, I found myself ordering a little more than usual. I had been eyeing the Hokkaido Scallop Sashimi ($16) for some time, and eventually gave in. Hokkaido is Japan’s most northern and largest island.  These delicious scallops are caught off the coast of this island, which is why they bear the island’s name.  Each uniquely tender scallop had a strong ginger essence, a slight sweetness and an incredible deep umami flavor. So, how is it different from a domestic scallop you asked?  A domestic scallop provides a silky, almost custard-like delicate texture while Hokkaido scallops have a dense, steak-like flavor profile. The portion size for this dish is on the smaller side, so if you’re greedy, you should think about ordering two.

So far, Kuro has lived up to the hype. Each entrée has been nothing short of amazing, the service is impeccable, and the ambiance is so pristine, that I feel a tad bit underdressed in my Hungry Black Man T-shirt. Believe it or not, but dessert was the best part of the meal! I ordered the Chocolate Hazelnut Bar ($12), and almost went into a damn coma. Why the hell was this marvelous architectural chocolate masterpiece so freaking astounding? It’s so nicely designed, but at the same time too delicious to be fancy.  I didn’t quite know what to do with this delicate, beautiful, amazingly scrumptious dish so I grabbed it with my hands, and stuffed the entire dessert in my mouth. I regret nothing. This dessert will be the highlight of your meal, and that’s saying a lot because the food is awesome.

I enjoyed my visit to Kuro, and will be back next year, when my income tax comes in.  Seriously, this place is for ballers. Do not come up in here if you’re on a budget or so hungry, you can go up twice in line at Golden Corral. This is fine dining at its best and you are going to need that AMEX.  Once you walk in the place, you know what type of joint this is.  Luxurious décor, exceedingly delightful entrees, unrivaled service, and exotic cuisine are what make Kuro special. This is a place to celebrate an anniversary, a raise, engagement and even birthdays if you all are ballin’ like that.