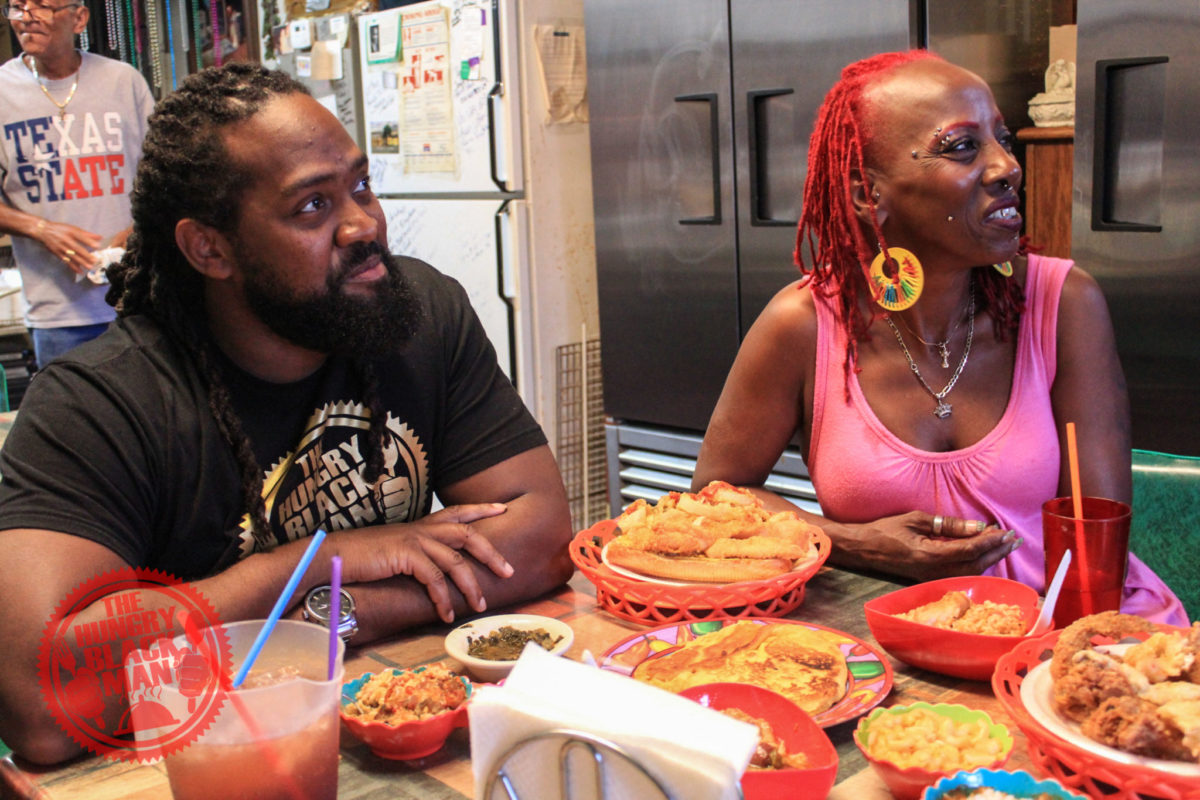 Attending the 2017 South by Southwest (SXSW)—a festival of music, film and technology that metastasizes in Austin each March has been an annual tradition for me going on 5 years now. Now that I’m The Hungry Black Man, I asked myself a vital question – where do Austin’s Black people eat?

In past years, I would remain downtown enjoying the vendors and food trucks stationed outside the convention center, but this year I ventured into Black Austin! Thanks to my Jewish friends, who seek out Kosher spots whenever they travel, I now do the same for Black owned eateries.

Black Austin is shockingly small, and surprisingly located almost walking distance from downtown Austin. Unfortunately, gentrification is rapidly destroying this once vibrant Black community.  Black businesses and homeowners are being bought and priced out of their neighborhoods, at an alarming rate. Thankfully, there are some restaurant owners who have refused to sell or relocate. They are weathering this storm and providing dynamic food for both locals and visitors alike.

Nubian Queen Lola’s Cajun Soul Food Café located at 1815 Rosewood Ave. demonstrates what resiliency and excellence look like.  The creator and current owner, Mrs. Lola Stephens-Bell, is an angel on earth. When I entered the small whimsical eatery decorated with Mardi Gras beads and all sorts of New Orleans novelty items, it reminded me of a Creole Cracker Barrel. Mrs. Bell discussed her passion for feeding Austin’s homeless and less fortunate. With no financial assistance from the government, nonprofits, or even the local city council, this Queen goes on her own and feeds folk every single week, sometimes every day. As she spoke to me, I felt helpless in my inability to support her efforts in a meaningful way. God willing, one day that will change.

As we discussed her charitable works, she put in an order for us to try. The menu is Creole and Cajun with Po-boys (pork, chicken and fish), crawfish étouffée, gumbo, being the highlighted gems in addition to spicy and delicious side items that include collard greens, red beans, cabbage, jambalaya and mac and cheese. Her prices are so inexpensive, I have no idea how she does it and still has the time and money to cook for the homeless as often as she does. On a recent visit to New Orleans, I proclaimed, “One of the best things about visiting New Orleans is that when you come here, you get to have food that you can’t have anywhere else in the country.”  How wrong was I! Lola’s crawfish étouffée and gumbo were better than EVERY spot in the French Quarter. I am dead #%@ serious.

The word étouffée (pronounced eh-too-fey) comes from the French word “to smother.” The dish is a thick stew, seasoned with amazing spices and flavors in addition to heaps of tender and scrumptious crawfish and, at times, shrimp. Not to be confused with gumbo, Lola’s crawfish étouffée uses similar Creole seasonings and is also served over rice, but her secret differentiation lies in the “blonde” roux, giving the dish a much lighter color and a distinct flavor distancing itself from the gumbo, which is lighter and slightly soupier.  One of the best I’ve had in a longtime, the crawfish etouffee is an absolute MUST HAVE!

Next was the Catfish and Shrimp Po-boy! Lord give me strength. This lady was bringing me all the way back to my days in the country towns of Baton Rouge with her amazing Creole cooking.  Each dish was reminiscent of soulful grandma cooking.

The term Po-boy has history in New Orleans dating back almost a century during a streetcar strike. Bennie and Clovis Martin, former streetcar operators who owned Martin Brothers’ Coffee Stand and Restaurant, wanted to support the current streetcar workers on strike. The brothers made sub sandwiches to feed the strikers, who they often called “poor boys.”

Interestingly, I feel a Po-boy, especially Lola’s Po-boy, is so much more than a sub! For starters, the bread of a Po-boy is very distinct from traditional sub sandwiches.  Lola’s uses a French bread that is more on the crusty side and not soft like a routine sub sandwich.  Also, her meats are fried to golden brown perfection unlike a deli sub.

The Creole seasoning used to fry the catfish and shrimp was #%@!%#& awesome! I ate this damn sandwich so quick, she probably confused me for one of the homeless (that was not intended to be mean, so don’t you DARE COME FOR ME). It came with lettuce and tomatoes with a secret mayo-like sauce that gave it a nice kick. A MUST HAVE!

Next was the gumbo. Now, I don’t want to hear you channeling up your gumbo experience and trying to make comparisons, because there is no comparison bih! The regional nature of the dish determines its authenticity, but also explains its varieties. Gumbo can be as thick as porridge, or as thin as soup; caramel colored or dark mahogany; bursting with seafood or as African slaves prepared it, with squirrel.  Remember, gumbo itself is inherently African. (Whatever you’re familiar with usually becomes your reference point for judging everything.)

Well, Lola’s is right up there with some of the best! The gumbo is packed with proteins (sausage, chicken, shrimp) and has a distinct flavor from the smokiness of the roux and sausage. Its sweet veraciousness is the result of the Cajun “holy trinity” (onion, celery and green pepper), joining with tasty stewed tomatoes all meshing together under a secret spice that punches you in the damn mouth!  This gumbo is not here to play no games. A MUST HAVE!

Oh, before I forget! The cornbread was everything! It’s funny because to be quite honest, it was more of a hoecake than cornbread. Either way it was huge. I ate it with my collard greens, red beans, cabbage and jambalaya. I enjoyed each side, except for the mac and cheese. I’m sorry Black folk in Louisiana and Texas make their mac and cheese way different than my people here in Miami, where we take mac and cheese very seriously.

Other than that, I absolutely loved my side items. Each was flavorful and could easily be substituted as a main entrée. Make sure you order a personalized pitcher of her “Cajun tea,” an intersection of fruity, tart, and sweet!  I had like four of those large pitchers, adding shots of Texas gin and vodka.  I absolutely loved the food and atmosphere in this eatery and will make this my culinary destination each SXSW.  Nubian Queen Lola’s Cajun Soul Food Café receives a 10 out of 10 stars and is Hungry Black Man Approved. You can reach them at  Phone: (512) 474-5652.