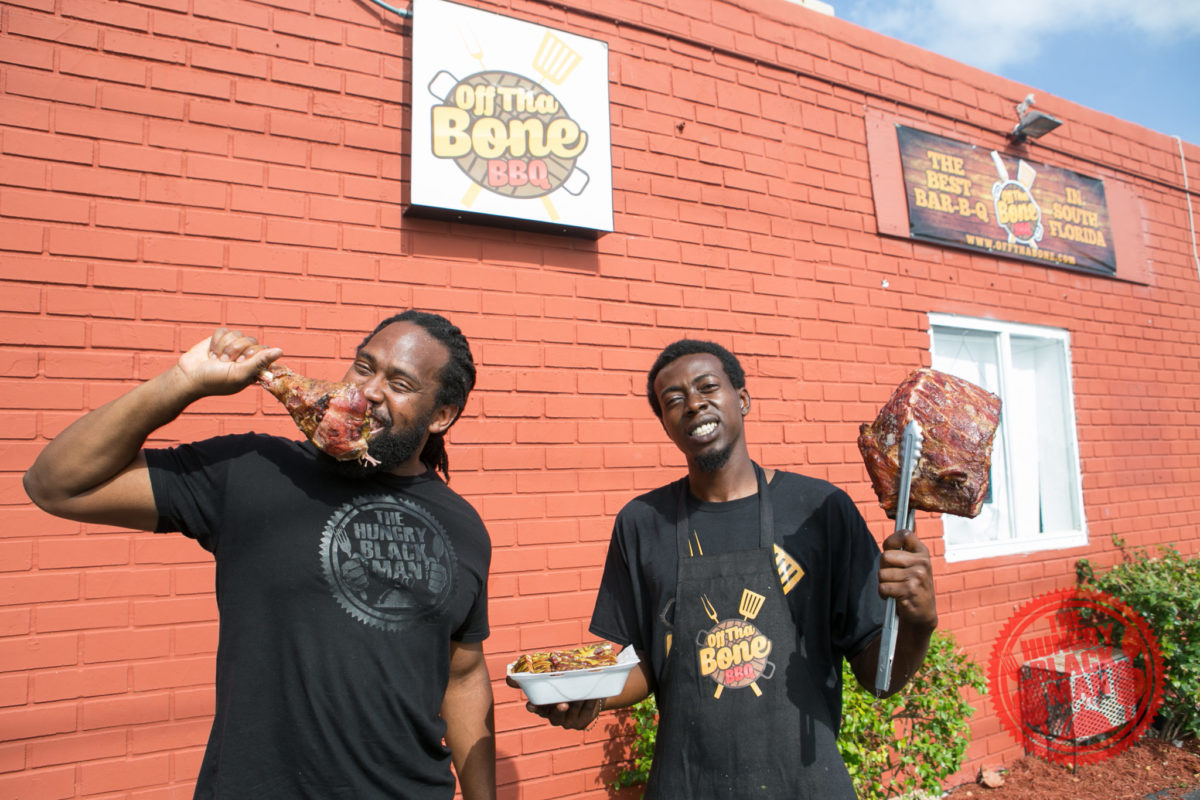 Nationally, Black folk are embracing Meatless Mondays and routine vegetarian and vegan dinners to improve health and celebrate the cruelty free movement. My health-consciousness notwithstanding, the desire for a slab of succulent, tender meat overcame me on my recent West Palm Beach Food tour, so, of course, I stopped at the famed McCray’s BBQ.

I didn’t place an order, however, because a young lady recognized me (I’m slowly becoming the most important nobody), and suggested I try Off Tha Bone BBQ, as it was a relatively new bricks and mortar joint that spent the previous year as a roving BBQ truck. I turned to Cameraman Korey, and we set sail to Off the Bone!

Arriving at Off Tha Bone, you’re greeted by large iron hand-constructed grills billowing smoke so aromatic, you can almost taste the ribs with each whiff.  The restaurant is in an all brick historic building with an air-conditioned ordering and waiting area. Owner and Grill master Daniel Spann and his partner, who goes only by “Rubin,” are two young brothers who began this dream while watching Daniel’s father burn meat and ruin family gatherings with charred, tough meat.

Lately, barbecue and its Family Reunion and July 4th nostalgia has experienced a form of food gentrification stemming from the artisan food movement. It is almost impossible to find classic BBQ without some form of tweaking or fusion. As a classic American Barbecue Man, I want tender, moist and smoky ribs – nothing more, nothing less! Well, at Off the Bone you get that and more!

Gone are the days of the large bearded uncle killing the grill. Daniel is a slender almost beardless beast on the grill, churning out Youth Fair sized Turkey Legs ($12) so amazingly smoky, juicy and tender, the texture makes you forget it’s turkey. You can order the Turkey Leg whole or have it pulled off and smothered in barbecue sauce. I choose the Game of Thrones style leg, ripping the meat from the bone allows me to connect with my spirit animal and ancestors.

The ribs are honestly the best in West Palm Beach. I ordered the rib dinner ($11) which took the company name to an entirely new level. Not only was the meat so succulent it falls off the bone, I ate all the meat entirely off the bone! I’m telling you that after you eat these ribs, the bones will look as if a wild animal licked them dry. I considered creating a Flintstones-styled xylophone, but that proved to be way too difficult.

Next up was the barbecue chicken dinner ($9). Lord Have Mercy! The smoke had penetrated every ounce of this bird creating an amazingly refreshing taste and juiciness I haven’t seen at many spots in South Florida, let alone West Palm Beach.

This young grill master had somehow tapped into the souls of our ancestors, the framers of American Barbecue who in the 16th Century, hunted and grilled feral pigs left behind by failed Spanish colonies. That’s right, we’ve been at this grilling thing since the 1500s, so don’t mess with a Black grill master, or you might get your feelings hurt.

Side items include all the staples such as baked beans, macaroni and cheese, and of course, collard greens. The restaurant carries two sauces, a Carolina sweet mustard sauce and a flavorful Memphis style sauce that restaurant staff can pour on or you can do it yourself. If you’re a fan of sauce-less barbecue, request your BBQ without sauce. Besides, it’s so good it can be eaten as is.   I was a fan of the Memphis sauce, much more than the mustard sauce, which was a little too sweet—bordering on a honey mustard taste. I’ve been blessed to have had some great barbecue from around the country including Kansas, Texas, and of course the Carolinas and Off Tha Bone stacks up against many of these joints.

Be sure to get a slice of their amazing pound cake, as well as their Smoked Sausage Sandwich ($3.00) – which is not to be missed. It’s not a Garcia Sausage or even those sausages you get downtown. This sausage is more of a Bratwurst or Loukaniko and is grilled to freaking perfection. I ate it without any condiments and then went back for a second. This MUST HAVE sausage sandwich has me salivating as I write about its awesomeness. I wonder if on my next visit, staff could grill some onions for this delicious sandwich.

Off Tha Bone is located 1516 N Tamarind Ave, West Palm Beach, FL 33401 and can be reached at (561) 480 – 6137 or (561) 294-9717.  I predict that Off Tha Bone will be inducted into one of America’s “not to be missed” barbecue spots. I’ve driven from Miami twice just for the turkey leg. I mean, where the hell can you get a good smoked turkey leg without the annual fair rolling around? From smiling faces at the service counter to my smiling face existing with my bag of culinary bliss, Off Tha Bone is Hungry Black Man approved.