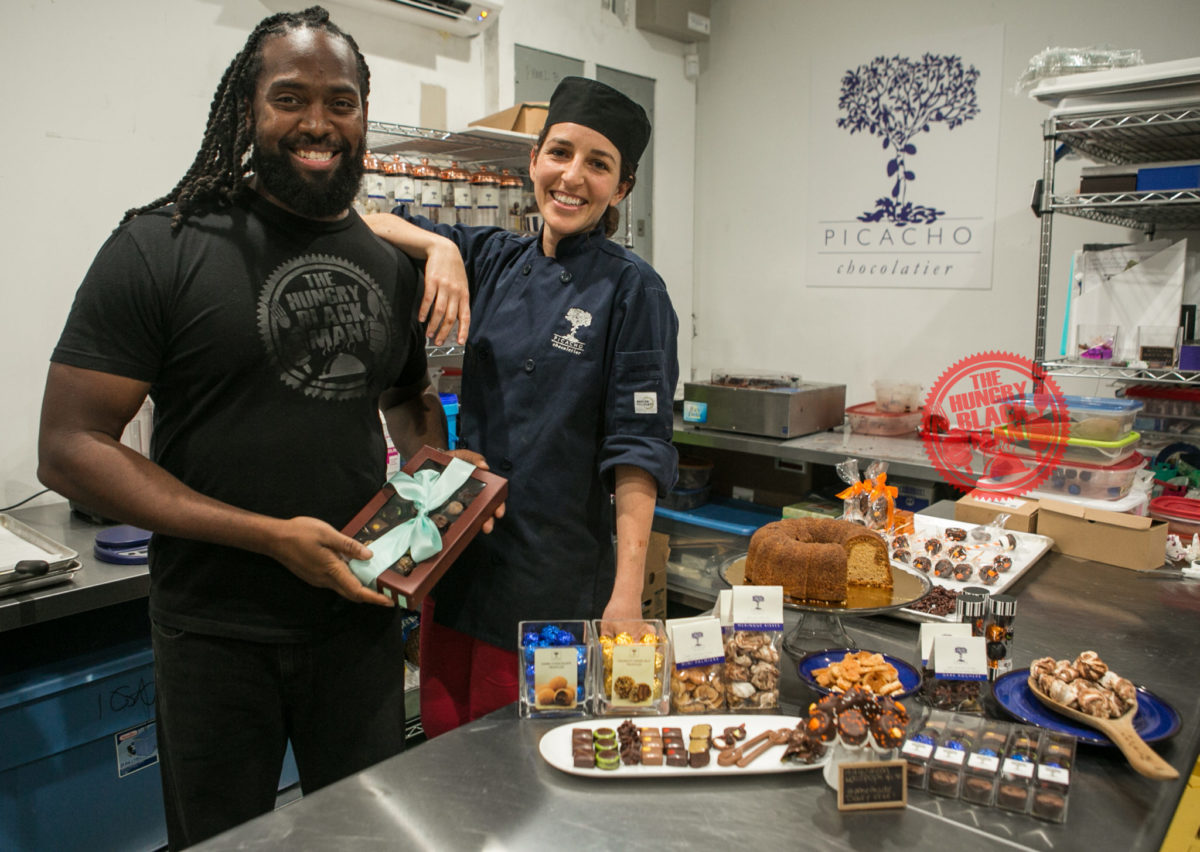 As with many of the finer things in life, a great piece of chocolate can be worth triple its weight in gold. This isn’t just a philosophical understanding, but a literal one, given a simple 1.5-ounce bar of To’ak will run you $260.  Granted, many of us are probably not interested in blowing $260 on a small bar of chocolate, however, we may have found the next best thing right under our noses right here in Miami.

Mariana Cidad is a Venezuelan chocolatier and creator of Picacho, a handcrafted chocolate and confectionery company based in the MiMo district in Miami which distributes its products to several coffee houses and restaurants throughout South Florida.

I had the opportunity to sample fine Venezuelan chocolate inside of Mariana’s mini Willy Wonka style operation. Tasting various pieces of chocolate sent endorphins flowing, rendering me weak in the knees.  At one point, while enjoying her handcrafted Hazelnut Truffle, I honestly lost balance for a second or two.

Mariana’s chocolates are made in the Belgian tradition, using the finest of Venezuelan cacao, which is one of, if not the best on the planet. It’s sad that I had never heard of the amazingness of Venezuelan chocolate prior to my visit. I was familiar with the sophistication and taste of notable chocolate houses such as Godiva and Lindt, but never in a million years would I have thought the best chocolate on the planet was coming out of Venezuela.

It actually makes more sense than giving credit to European chocolatiers, especially since the history of chocolate began in Mesoamerica, where as far back as 1900 BC, the Aztec empire used cacao seeds in creating the world’s first hot chocolate, along with other gastronomic pleasures. The seeds were so respected; they even doubled as currency at some point within the empire.

So why aren’t folks celebrating Venezuelan chocolate? According to Harvard University professor Rohit Deshpandé, who coined the term ‘provenance paradox,’ there exists a discriminatory practice of determining quality based on geographic location.

A product’s country of origin establishes its authenticity. Consumers associate certain geographies with the best products: French wine, Italian sports cars, Swiss and Belgian chocolate. Competing products from other countries—especially developing markets—are perceived as less authentic. Even when their quality is on par with or superior of established players.

Well, I certainly don’t suffer from the provenance paradox, because Mariana’s chocolate gave both Godiva and Lindt a run for their money. Every piece – whether dark or milk chocolate – was sophisticated and ultra-smooth. My favorites were the truffles, the rock, the almond roche (vegan) and the coffee chocolate.

As you may have heard, indulging in a little dark chocolate occasionally might be healthful, as some research links it to lower blood pressure and certain other health benefits. But don’t go too crazy, because as the quality of the chocolate goes up, so do the calories!

Like wine, the chocolate had a complex and decadent taste with a beginning, middle, and finishing taste that could be distinctively described. Each flavor didn’t just jump out at you, like in Godiva, but had more of a subtlety that allowed the flavor profiles to blossom throughout the palate, evolving slowly for a more meaningful and thoughtful consumption.

Outside of the chocolates, I had the Chocolate Meringue Kisses, which were sugary and standard, except for the amazing chocolate streaming through which became an amazing accompaniment to my cup of coffee! Mariana even had a spoon (vegan) made of chocolate that releases chocolatey goodness in your morning cup!

Each chocolate is reasonably priced, falling way under the asking price for Godiva’s brand. As consumers, we should understand that price does not guarantee excellence. Some of the more expensive chocolates I have tasted were just pedestrian compared to the amazing flavors experienced at this small handcrafted chocolatier; which offers amazing deals on gift boxes and children’s specials on holidays.

You can find Picacho chocolate throughout stores in South Florida by visiting https://chocopicacho.com or visit their workshop headquarters inside the Flavorish Market at 7283 Biscayne Blvd. Miami, FL 33138. Call (786) 691-7904 for orders!