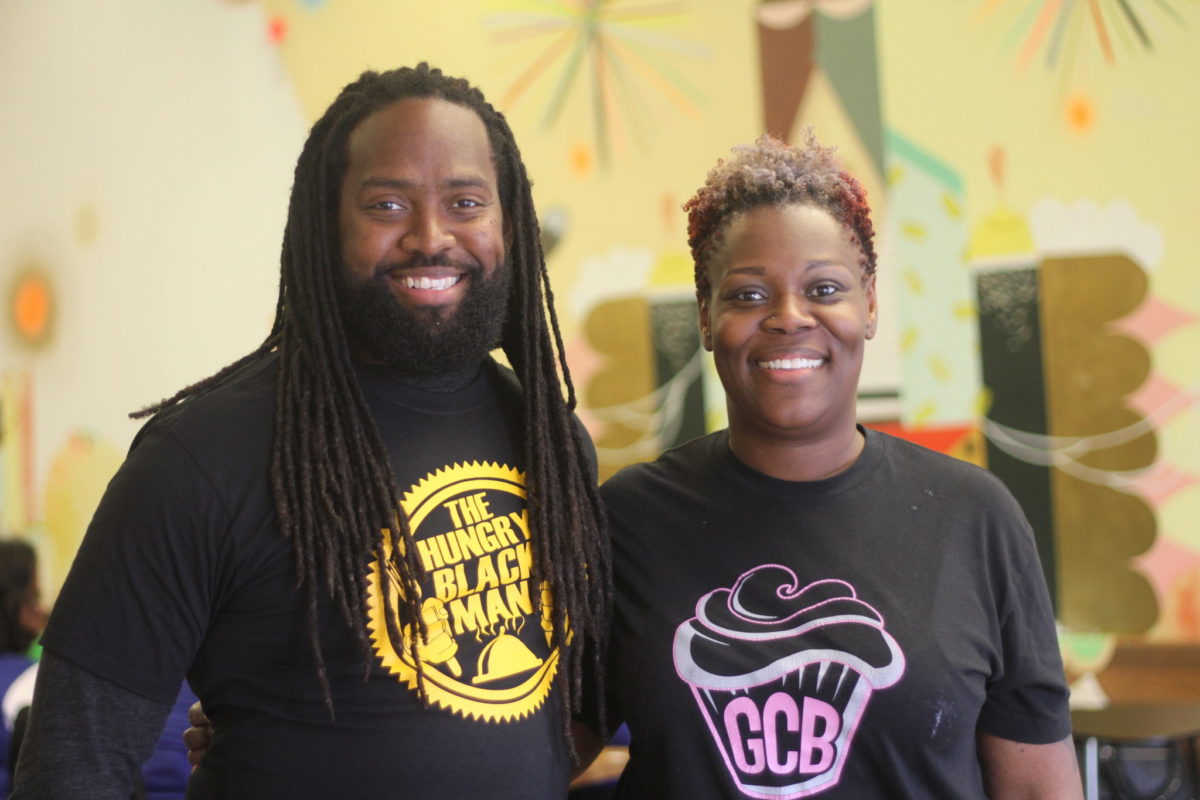 It’s a drizzly and cold Detroit afternoon with our film crew (my nephews with iPhones) trying to get into the storied Good Cakes and Bakes Bakery. We waded into scores of customers grabbing baked goods off the shelves while gulping down fresh French pressed coffee. On the other side of the register, two petite ladies are engaging in a medieval style battle to snag the last vegan chocolate chip cookie.

As you can imagine, I was a bit concerned. This bakery seemed to have a culinary power over these folks, and I wanted in. I busted my way through the door and a random customer immediately began singing the praises of the bakery after discovering we were not from the area. Her loud adorations created a “blood sense” from other customers, who joined in on this collective raving about the baked goods before shifting their admiration to April, a bit of a baker rock star. Several customers honestly reminded me of the crazed people in Bird Box who didn’t kill themselves after seeing the invisible demons. These folks were essentially a Good Cakes and Bakes customer tribe!

April and Michelle Anderson opened Good Cakes and Bakes located at 19363 Livernois Ave, Detroit, MI 48221, hoping to create a unique flavor experience that includes amazing organic and vegan options supported by locally sourced, natural, and sustainable ingredients. April, a native Detroiter and award-winning pastry chef, has been featured on the Cooking Channel, Food Network, and most recently the OWN network.

April, the creative culinary genius behind each and recipe, gets up at 5am daily to create cakes, cookies, brownies, milk shakes, ice cream, and even fresh biscuits from scratch with no artificial ingredients. The shop’s fiercely loyal customers and I were amazed by her ability to fill an order of 500 cookies while still churning out enough baked deliciousness to satisfy the seemingly non-stop foot traffic with grace, skill, and appreciation.

That baked deliciousness is very apparent with her three-layered GERMAN CHOCOLATE CAKE! SHE WANT SMOKE WITH THIS DAMN CAKE! This masterpiece, made with house made buttermilk, is one of the moistest desserts I’ve had in some time and one of my absolute favorites. All April’s cakes are made from scratch and this delectable dessert includes a subtle crunch provided by the pecan-coconut icing combined with semi sweet and a high-quality milk chocolate. The resulting layers of the nutty and silky filling kiss a balanced icing for the perfect combination of sweet, sour, and bitter. Not to mention the overall cake texture of ultimate moisture stemming from creamy…you know what, I’m done with this description because my mouth is about to start watering and I don’t have the money to fly to Detroit right now.

Next, we tried a variety of perfectly baked cupcakes topped superbly with buttercream icing. Interestingly, although different from the actual cakes, the cupcakes were also extremely moist and obviously made with high quality ingredients. They taste so good you’ll be scarfing these babies down like Krispy Kreme Doughnuts. Wait, you don’t scarf down doughnuts you say? Well, don’t you dare judge my ass for doing so. You get the point. You’re simply not going to be able to eat just one of these cupcakes. I promise you. She creates classic flavors as well as seasonal and special creations that somehow manage to taste better with each visit.

If cookies and brownies are more of your thing, then you are in for a real treat. The spot has vegan options in their vegan chocolate chip cookie that will have you checking for April’s degree from Hogwarts. I just don’t understand how she’s able to do this. I was thinking maybe the ladies at Detroit Vegan Soul had teamed up with April, but alas, she did this alone. She created one of the most delicious vegan chocolate chip cookies in the area as well as other amazing vegan options like her Vegan Oatmeal Bar. This delicious confection features everything you love about an oatmeal raisin cookie, but with additional ingredients that pretty much create a complete meal.

I can’t brag enough on the amazingness of this bakery. From homemade Hawaiian rolls to the new addition of homemade ice cream, this is a true gem in the City of Detroit. April and Michelle’s warm character and spirit will have you craving their amazing offerings as well as their positive presence. I love this spot so much, when I visit Detroit, they are my very first stop. On weekends and special days, April allows native chefs to set up pop-ups along with a talked about weekend brunch that has been well received by some of the city’s most notable culinary critics.

An efficient and warming space, Good Cakes and Bakes receives the Hungry Black Man approval and I strongly suggest you visit to see for yourself what this amazing woman entrepreneur, chef, and baker has to offer. You can reach them at (313) 468-9915 or visit them at www.goodcakesandbakes.com.