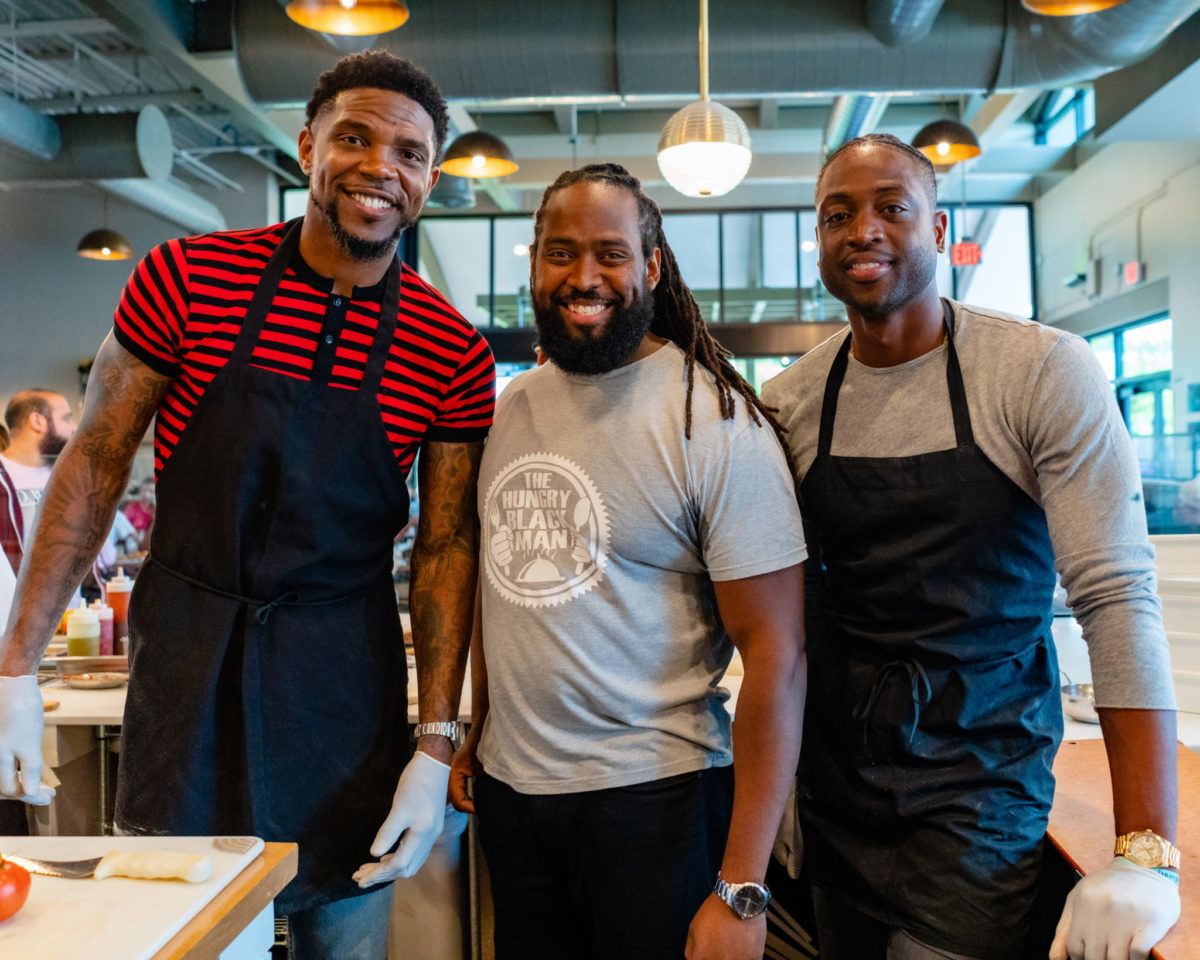 Before I switched careers as a food entrepreneur, I served in various leadership roles in municipal government. One position I found particularly rewarding, was my post as the Director of Parks and Recreation for a city in Miami-Dade County. I have very fond memories of working on several community projects, built neighborhood parks, swimming pools, community centers, and operated a variety of cultural, recreational, and athletic programming. However, it was the day I met Udonis Haslem that serves as one of my most memorable. Mr. Haslem’s Aunt contacted the city with an idea to conduct a massive toy give-a-way for some of the city’s neediest families. Of course, city leadership welcomed this opportunity and Udonis blew expectations with a massive tent structure packed with bikes, games, toys, shoes, uniforms, and just about any and everything a kid could wish for.  I remember standing alongside Udonis, assisting in this massive distribution thinking to myself, “What a stand-up brother”.

The kids in the line to receive the toys were bad as hell. Yelling, pushing, and clamoring for the most expensive or desirable items, until Udonis politely quieted them with hand daps and fist bumps, meanwhile I handled them by cursing at every damn body which led to an altercation with a woman and her boyfriend who was waiting for me outside the distribution gate to whop my ass, but that story is for another article. Fortunately, I had time to reflect on how much of an asshole I had been, while this superstar athlete displayed the patience of a saint. Providentially, the Lord and cannabis have assisted in my growth and peace both spiritually and mentally. Praise Him! After all the kids received their toys, Udonis wasn’t done. He provided the volunteers and staff with $100 gift cards. As a fresh college grad, you have no idea how much that money helped my ass!  I was broke as hell. I used it to purchase my family shit for the holidays. It now feels great to be able to return the favor in sharing the amazing and delicious happenings at his, and partner Dwyane Wade’s newly opened eatery, 800° Woodfired Kitchen located at 2956 NE 199th St, Aventura, FL 33180.

I was excited to try this place out. So here it goes. The place is moderately priced, but can be a bit expensive for some items. All the pizzas are good enough, and some are a bit pedestrian, but you won’t be disappointed one way or the other with just about any selection. My favorite pizza by far is the smoked salmon pastrami and the BBQ Chicken. But for me, the real winners were in Chef Ed “Chef Eddie” Donoso entrees. I started with the half Rotisserie Chicken ($24) and potatoes served with a Peruvian Green sauce. Peruvian chicken, aka pollo a la brasa, or simply “charcoal chicken” is one of my favorite entrees within Peruvian cuisine, only second to ceviche of course. My go to spot would be Pollos & Jarras by Juan Chipoco in downtown Miami, where you can get an incredible chicken! Pollos & Jarras would be my reference point here, and I am happy to say Chef Eddie didn’t disappoint. While not as good as Pollos & Jarras, it came incredibly close. Close enough, that this is my second favorite thing on the menu. The chicken was tender and flavorful after biting through a beautifully crisp, savory, smoke-kissed skin, followed by an herbaceous packed chicken, topped with a sauce so good it would turn out even the most disciplined diner into a Walking Dead style zombie fiend. That shit is mad addictive.

Next up was the scampi-style Key West pink shrimp appetizer ($19) served in a small casserole dish over garlic toast. Each shrimp was tasty and paired well with the house made cream sauce. The Burrata ($16) was my second appetizer, which was tasty and sophisticated. The Burrata cheese was absolutely incredible when paired with the watermelon, arugula, and of course the salty prosciutto. The cream cheese hidden inside provided a much-welcomed richness to every bite. Served on top of grilled bread, it literally is a deconstructed pizza at its best!

To wash everything down I put ALL MY TRUST in my new friend and director of operations, Mr. Joey Sabato. If you visit, ask for Joey and tell him the Hungry Black Man asked that he prepares you one of his famed cocktails. This man is one of the most talented mixologists one can ask for. We both are gin aficionados, so let’s just say each time I dine and Joey’s there, I have to uber home. The drinks here remind me of The Broken Shaker on South Beach in their complexity and incredible evolving flavorings. I can honestly say, this is my go-to for HAPPPY HOUR! They have some great deals on food and drinks. To be honest, Happy Hour would be the best time to truly experience the uniqueness of this spot in comparison to its other locations.

Ok, wrapping things up, I have to be completely honest here. Apparently, Wade and Udonis worked with culinary staff in creating two entrees on the menu to represent each of them. Some sort of battle was even done between the two in deciding which is better. I am saddened to say, that Udonis got his ass whopped. This goddamn Wade Burger ($19) is good as hell. Like, this is one of my top 10 burgers for real, for real. The dry aged aromatic beef burger is a true standout topped with aged white cheddar, roasted garlic aioli, carnalized onions, and a unique bacon jam. Lord have mercy. You will lose your damn mind in here with this burger. I had two. I know, I know. I should have had three, but the way my blood pressure situated, that wouldn’t have been wise.

I’m honestly a little shocked at Udonis. He totally omitted spice and heat from the wings. They need HEAT! However, all of my friends like Udonis wings way better than Wade’s burger, but their palates are inferior to that of The Hungry Black Man! Yes, I spoke in 3rd person to emphasize this point. All jokes aside, Udonis wings are tasty. I travel with hot sauce just like Hilary Clinton, so a couple dabs on Udonis wings, and now Wade has some real competition. For dessert we had the overrated Fireman Derek’s crack pie. I honestly think Fireman Derek is good, but the hype is a bit much. They are just marketed incredibly well. My favorite dessert here would be the Oreo pie and the carrot cake.

Most recently, I had the Greek tomato salad ($15) with feta, cucumbers and heirloom tomatoes, and a tartufo pizza ($19) with wild mushrooms, mozzarella, truffle pecorino, garlic and arugula. I had to ask Korey to take photos, in which he was mad, but whatever! Our followers need to know how everything looks! So, the Greek salad was AMAZING. I absolutely loved how each component of this refreshing salad were super complimentary and non-warring. As for the pizza, the dough was kind of chewy. I probably wouldn’t get that again.

All in all, this is definitely a spot worth visiting. It makes for the perfect combination of dinner and a movie at my favorite theater inside Aventura Mall. The 4,000-square-foot space is bright and rustic, with seating for 125, a full bar, and an open patio with televisions. However, this spot is NOT A SPORTS BAR, but you can watch the games on the televisions pretty much daily. I enjoyed my meal here and has been back several times, even catching both Udonis and Wade in action making pizzas. We had a quick conversation on food, life, blackness, and business. These two guys are both super down to earth and genuine. Make sure you all comment below on your experience when you make it out!

Visit this eatery at 2956 NE 199th St, Aventura, FL 33180 or call them at (305) 902-4363. You can read more on amazing eateries in your hometown and the nation by following us @thehungryblackman on Facebook and Instagram or subscribe to our blog at www.thehungryblackman.com

Our amazing photography is from none other than our Media Director, Mr. Korey Davis. Check him out at Korey Davis Photography @kdavisphotog for booking who was assisted by CHEF KRIS KOFI who can be contacted at [email protected]

Tulsa Woman Pitmaster Has Mastered The Grill For 44 Years!