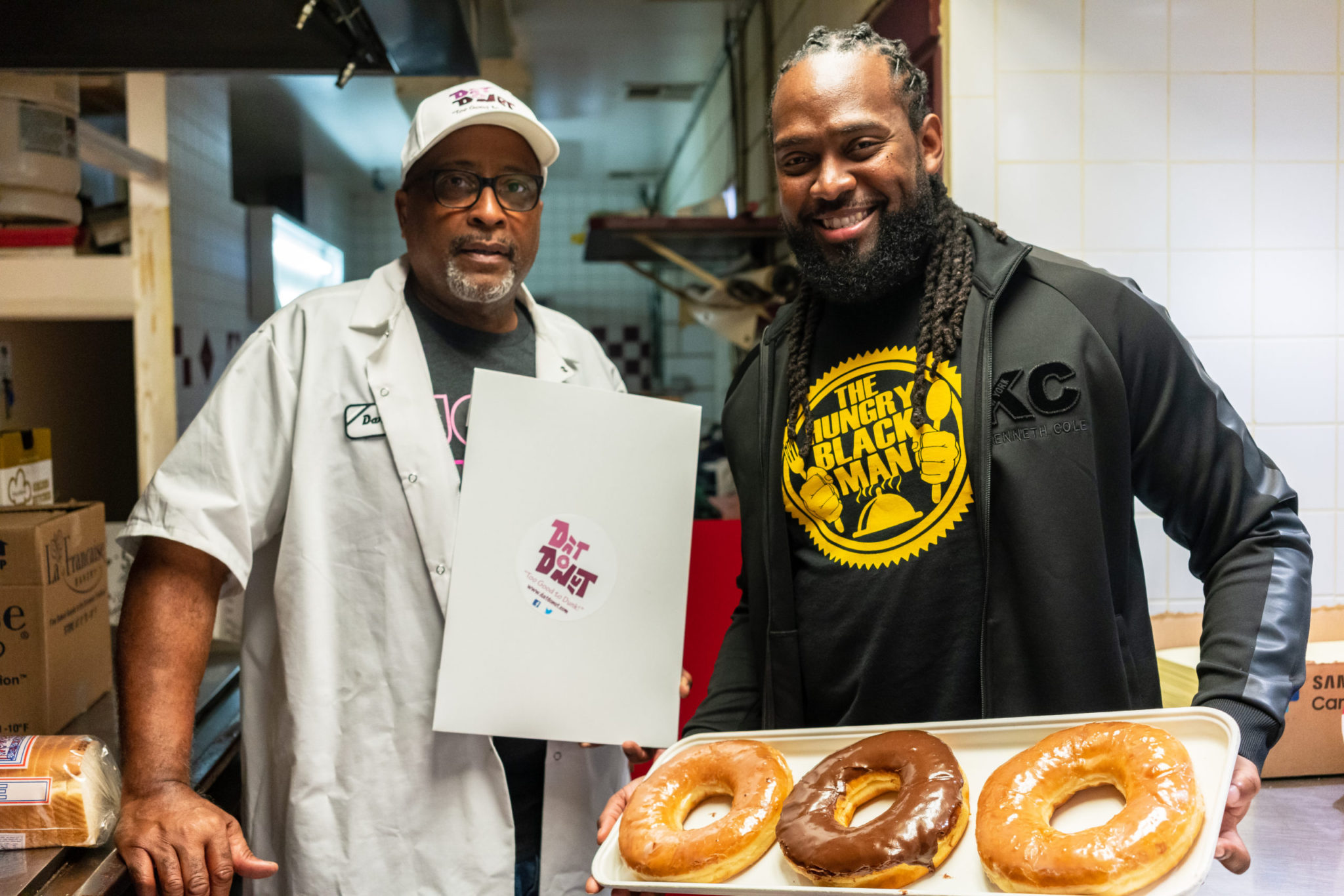 For years, I’ve satisfied my doughnut cravings at the delicious and efficient Mojo Doughnuts. Located a couple miles outside of Miami, Mojo resembles the critically acclaimed Voodoo Doughnuts—before the hype. I live walking distance from a Krispy Kreme Factory, but I prefer taking the 30-minute drive to Mojo instead of subjecting myself to the over processed white flour, ultra-refined sugary diabetic headache-inducing heap of gooey lab addicting fried dough. Consequently, as much as I love Mojo, even they, as expressed by thepsych pop band Phantogram: don’t get me high anymore. I found a new one to fulfil my needs. I found my doughnut soulmate of 2019 on a recent trip to Chicago. I’m sorry Mojo, but I am leaving.

During our 2nd(was it the second or third?) Annual Chicago Black Foodie Tour, which my good brother Dino Dean of the incredible vlog, Black Foodies helped curate (thank you brother), The Hungry Black Man Team discovered a South Side staple in the locally unrivalled Dat Dougnut. WHY THE HELL NOBODY TOLD ME THE DOUGHNUTS WAS THIS DAMN GOOD! Like for real.

Chicagoans are apparently stingy when it comes to sharing the true hidden gems within the inner core of the city. They try and hide shit from a brother to keep for themselves. Well that’s over because I’ve discovered a very effective approach to finding amazing Black-owned restaurants. I love walking up to brothers and sisters on the corner to ask for the best of the best. And I love how they eagerly share positive recommendations complete with vivid instructions on how to get there. We experienced none of the scary shit the media is always reporting about Chicago. Nobody was shooting at us or trying to steal our car or the large amount of camera equipment we were lugging around. I love Chicago.

Dat Donut is located at 8251 S Cottage Grove Ave, Chicago, IL 60619 in an unassuming plaza with its sister brand, Uncle Johns BBQ. The plaza has one entrance, a culinary crossroad that will either take you straight to the smoking hickory wood or have you making a quick right to the scent of sweet fried dough and sights of beautifully laid out pastries and doughnuts. There you’ll see staff casually smudging chocolate on or infusing jelly into the pillow like pastries inside the Wonka-like doughnut factory.

Having an unimaginable sweet tooth, I veered to the right, greeted by jolly employees, but more importantly with a doughnut bigger than the circumference of my face. My head is big as hell, so yeah, that was a big ass doughnut.

The owner and operator, Darryl Townson, laughed at our shocking reaction before providing a wealth of information on this amazing space. We were also blessed to meet Mr. Richard, a master doughnut maker, who has been at it for over 40 years. His masterful ability to shape, form and glaze each doughnut was therapeutic and hypnotic. He could be a superhero…or villain with this skill. The 80-year-old was both pleasant and a great conversationalist. We enjoyed our conversation but enjoyed the extremely reasonably priced, delightful doughnuts even more!

Fall, I would imagine is doughnut season. As it begins to get cooler, there’s nothing better than a delicious doughnut and steaming hot coffee, both of which can be enjoyed here in addition to some hearty breakfast sandwiches that we could try, due to the insane caloric consumption on the trip so far. As for the doughnuts, the beautifully delicious variety included bismarcks bursting with freshly melted chocolate and jam, and crullers both large and small. Along with old fashioned cake doughnuts with a soft pound cake texture and on its surface a glazed doughy goodness forming indications of the sugar cooling like a sugary glazed Pompeii. The decadent cake interior is surrounded by a slight crunchiness to reveal a moist and rich interior of pure doughnut goodness. LORD HAVE MERCY THIS #[email protected]# WAS GOOD!

I tried just about every doughnut displayed in the dated, yet effectively illuminated case. The entire production process is done with human hands, by staff forming, frying, designing, flavoring and displaying the twists, tiger tails, Bavarian creams and apple fritters.

These magnificent doughnuts are melt-in-your-mouth soft and can be a bit addictive if you’re not careful. I should be ashamed to admit I ate the entire colossal doughnut, but surprisingly, instead of guilt or shame, I felt nothing but greed, joy and happiness. I want another right now just thinking about it.

From French crullers to doughnut holes, Dat Doughnuts is a destination bakery and doughnut factory that I am still recovering from. When I dreamed of one of these babies a couple weeks ago, I realized I am officially a fiend. I need help. Don’t tell anyone, but last month I flew to Chicago just to get more of those damn doughnuts.  Yeah, I visited some other spots, but my primary purpose was to get a double dozen assorted. This space is a trifecta of deliciousness, customer services and efficiency. I can’t wait to see your comments on your favorite!

You can reach Dat Doughnuts at (773) 723-1002 and tell them The Hungry Black Man wants another colossal doughnut, but this time, they must ship it!

Until next time, love, laugh, and eat

ALL PHOTO CREDIT IS DUE TO CHEF KRIS KOFI!  You can contact the photographer at [email protected]

Tulsa Woman Pitmaster Has Mastered The Grill For 44 Years!