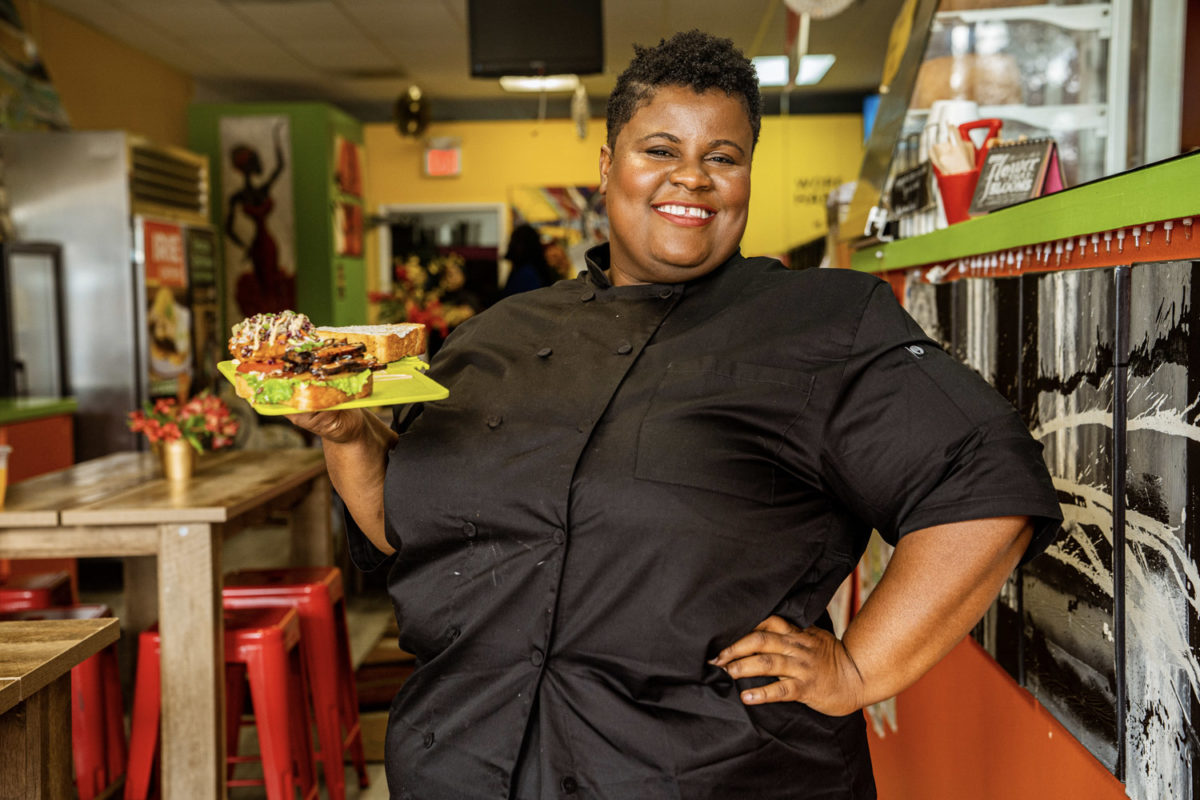 The Hungry Black Man Soul Vegan Festival is an annual event held on the sands of beautiful Miami Beach each February. More than 4,000 people convene to enjoy vegan cuisine from some of the region’s most talented and skillful chefs, cooks, creators, artisans, and producers for a day of deliciousness and soulful cultural celebration.

The gathering is especially meaningful for those who enjoy soul food and Afro-Caribbean cuisine but had a hard time finding vegan versions of their favorite staples. Featured chefs at the festival demonstrated their ability to transform vegetables into memories of grandma’s cooking on a Sunday after church from southern fried chicken to savory curry goat, it’s nothing short of magic.

The lead vegan sorceress at the festival was none other than Chef Jenneil Jacobs of Orlando, FL, better known as Chef Jenn. Sampling her new menu at the festival had my taste buds feening for more so our team decided to take a 3-hour road trip (yes, we literally got on the road because her food was this damn good) to visit her newly opened restaurant, Dajen Eats located at 323 E Kennedy Blvd suite f, Eatonville, FL 32751,

Our first order was the curry goat with rice and peas. Listen. As a Miamian, I am a curry goat expert by default. It’s one of those entrees that you need to know what you’re doing before you even attempt to share the finished product with anyone else. For those who have never had the dish from an Afro-Caribbean cook, it is very flavorful with aromatics, spices galore, and delectable potatoes. Additionally, the goat is stewed for hours on end allowing the meat to become so tender that it gracefully falls off the bone absorbing every ounce of flavor.

This Queen did not come to play with us meat eaters. She managed to the capture the exact curry goat profile, and then some using her vegan magic. After blowing my mind with the vegan curry goat, she busted out with some vegan jerk chicken that was so delicious and authentic that I’m seriously considering becoming completely vegan. I eat vegan three days a week, but if I could eat Jenn’s food daily, transitioning would be easy.

The jerk chicken was so amazingly seasoned that you completely forget you’re not eating chicken. Every piece exuded the same deliciousness as the chicken version, which in many instances is marinated in aromatic spices like all spice and Scotch bonnet peppers, which were both present in the vegan version Chef Jen masterfully created.

Now for the real show stopper! The Identity Crisis Sandwich is a delightful creation featuring Chef Jenn’s signature vegan jerk and buffalo chicken with secret sauce, shredded greens, all sandwiched between her fresh baked Jamaican Hard Dough Bread, which is a star all by itself that can be ordered by the loaf. Baked at the restaurant, I often compare Chef’s soft and buttery bread to the bread at some of the nation’s most notable bakeries.

So, what happens when you take your first bite of the Identity Crisis Sandwich? It is an instant consumption of the senses so you’ll want to get as much of the fragrant contents in your mouth with one bite. Be prepared to experience sweetness, sourness, saltiness, with evolving textures ranging from the softness of the bread to the welcomed crunch from the crispy vegan chicken. This sandwich is EVERYTHING! So much so, I would put it up against any sandwich, meat based OR vegan!

Dajen Eats is an unbelievable gem with everything from Jamaican classics to soul food joy. She’s also managed to create an incredible line of fresh baked biscuit sandwiches, including a chicken biscuit that I would literally fight somebody to get.

This restaurant is quite possibly the state’s most addictive vegan eatery serving homemade vegan ice cream, sandwiches, platters, and breakfast sandwiches all homemade and hand crafted for true foodies. Chef Jenn has a frozen food line that is creating waves locally, making it even more certain that Chef Jen’s magic will one day be a household name. Writing this review got me jonesing for another identity crisis so I’ll be making a visit this week for my fix.

To top all of this culinary excellence off, the restaurant is located in the historic Eatonville, Florida, one of the first FUBU (FOR US, BY US) all Black municipalities in the United States.  Made famous by author Zora Neale Hurston, who featured the town in her classic book, Their Eyes Were Watching Godand others, it is fitting that this delectable eatery is located in such a rich, historical area.