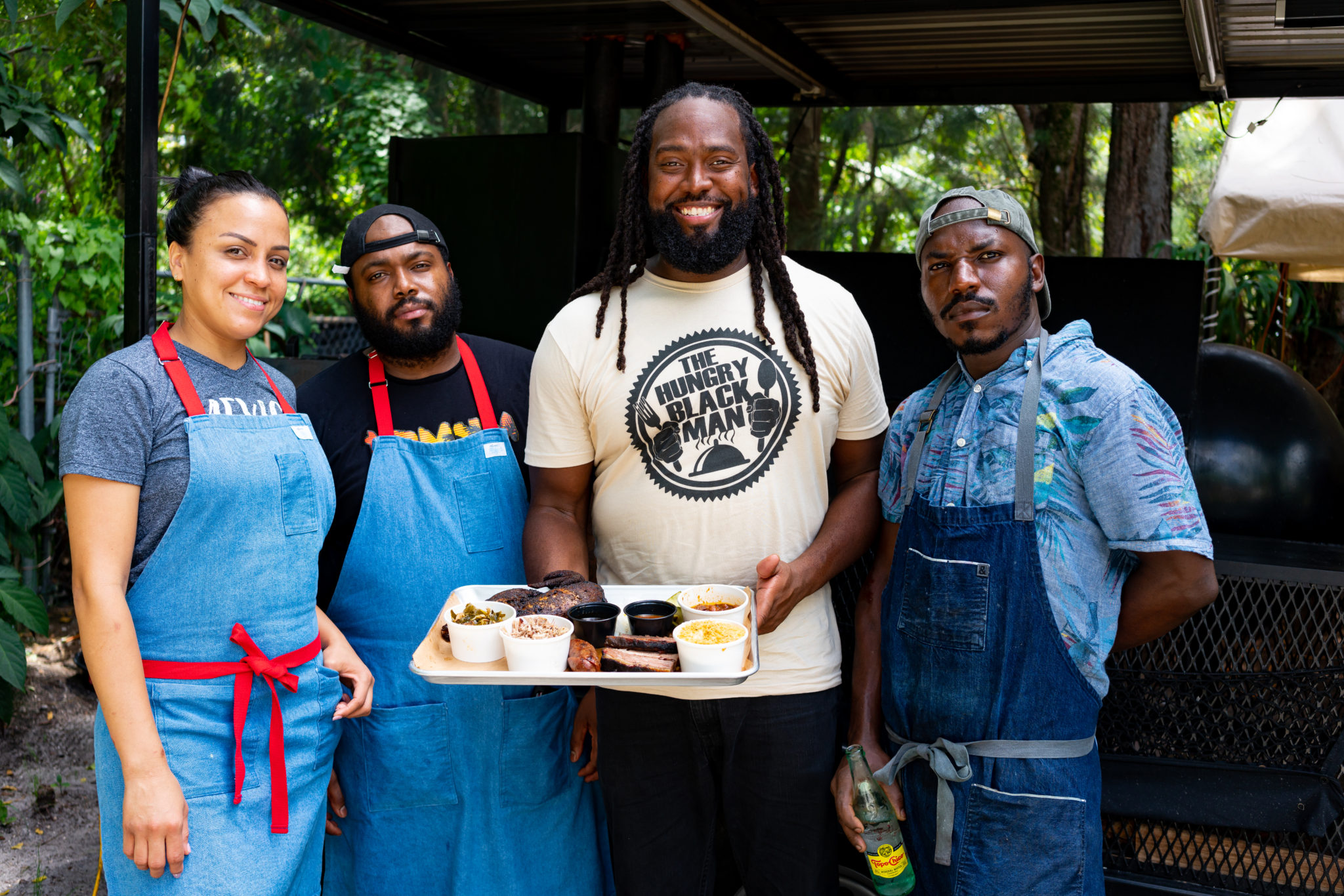 I met Chef Raheem Sealey a little over a year ago in his capacity as head chef at one of Miami’s swankiest, high end restaurants. We had an amazing conversation about his incredible ability to transform flavors while interpreting culture though the palate. Classically trained, Chef Raheem fuses both skill and ancestral cooking to create Miami’s newest BBQ craze, The Drinking Pig. His dynamic team includes his surrogate brother Chef Mark Wint (BEST SMOKING SKILL IN ALL MIAMI-DADE COUNTY), and his lovely wife, Chef Yohanir Sandoval.

While space, fire ordinances, and outdated county policies may mean the early pits of Liberty City, Overtown, Hialeah, and even Miami Gardens are impossible to duplicate in Miami-Dade County today, Raheem is working to not only bring back the nostalgia of the long gone roadside pits, but to also surpass expectations of those of us old enough to remember their amazing offerings.

Currently serving as a weekend popup open Friday through Sunday from 11am – 9pm, Drinking Pig BBQ is located at 845 NE 151st St, Miami, FL 33162 in Northeast Miami Dade. The space is in a residential neighborhood, with cool outdoor seating and complimentary beer and water. I am proud to inform you that I was the first customer to order EVERYTHING off the menu.

I took Chef Kris Kofi along with me and we were impressed, humbled, and satisfied. Raheem and Mark are incredible chefs, turned pit masters who, like sages of the craft, run certified Angus briskets through the smoker until a beautiful tar-black crust adorns the tender, juicy and nearly perfectly tender meat with beautiful pockets of delicious fat!

The great African-American chef, pit master, and father of Kansas City Barbecue, Mr. Henry Perry would be very proud of these brothers, as their brisket resembles that of Gates BBQ in Kansas City and is the best I’ve tasted in all Miami-Dade County; an assertion I stand by until another dethrones The Drinking Pig!

The barbecue is of the “low and slow” persuasion with African Diaspora flavors and a hint of Venezuelan goodness.  It is deliciously paired with Chef Sandoval’s soft, moist and tasty cornbread, made with pieces of real roasted corn. Unlike the African-American cornbread(s), it borrows from the indigenous and native food pathways in taste and presentation. I enjoyed every bite.

Side items are usually trash at BBQ spots in Miami-Dade, but here, I enjoyed the homemade baked beans! Yes, they are literally making baked beans from scratch. Each bite revealed a sweet and tangy profile with chef’s commitment to an Al dente bean, as opposed to what he described as mushy canned beans used by just about every other BBQ spot in Miami. The beans almost resemble Cowboy Beans in both presentation and taste. Aside from the mac and cheese, the beans were my favorite side.

The mac and cheese was unique and tasty. It is a stove top variety that is not mushy nor watery but generously coated with various cheeses while providing an amazing buttery and pungent flavor profile with hints of sharp and sweet tastes topped with buttered bread crumbs. Alongside the mac and cheese was their amazing corn soufflé. Called hoppy glop throughout the south and in Appalachia, this delicious side, made with whole kernels from scratch, was quite impressive. The collard greens are mild and earthy with a vegetal flavor and hearty texture. I liked them, but if you’re a stickler for African-American grandma style greens, be mindful that these greens are not the greens with the Black Thanksgiving vibe. They’re more of the healthier greens with a tasty broth.

Now we move on to the star of the show, THE MEAT! Chef Mark demonstrates gradations of technique on the smoker that are no easy feat. This guy is not just on the grill cooking meat; he is utilizing complex techniques that fine dining French cuisine might require.

The combination of African-American Barbecue and Jamaican spice and seasoning for this chicken will have you shedding tears. In addition to THE BEST BRISKET, they also have THE BEST SMOKED CHICKEN IN ALL MIAMI-DADE COUNTY! Lord have mercy. This chicken is filled with flavor and smoked to perfection.

I am waiting on them to introduce a chicken salad by the pound from this chicken. I bought a whole bird and made a chicken salad out of it, took a bite, and loss consciousness for about five minutes while I visited the spirit of the chicken to thank it for its sacrifice. In exchange, I received the secrets of the universe. That is what this chicken will do for you.

Finally, we come to their HOMEMADE SAUSAGES! Yep, theses brothers are old school to the core – making the casting, ground meat, and seasonings in-house. Chef Mark smokes the hell out of the incredible sausages that I used to make a sausage sandwich so good that I could easily create a business selling homemade sausage sandwiches. Just about everything is made from scratch including their Asian inspired barbecue sauces, pickles, pickled onions, and dipping sauce for the chicken!

As of last Friday, I have eaten at four hundred restaurants during our Black Foodie Tour of Birmingham, Nashville, and Memphis, and The Drinking Pig goes down as one of the most memorable. Trey Hollis and his wife Autumn are the only other people I’m aware of doing BBQ like this in South Florida. Trey’s father is from Kansas City and learned from some of the greats.

Thankfully, we have this incredible talent, taste, and skill right here that allows Miami to finally enter the realms of amazing BBQ. Check them out this weekend and order ahead by calling (954) 589-3759.