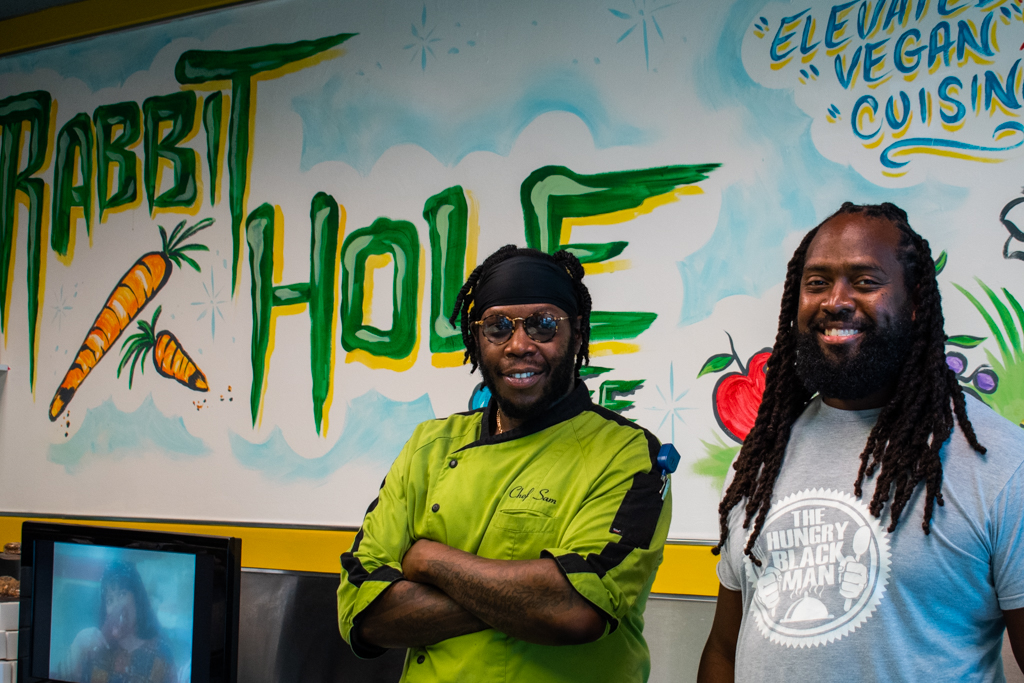 We’ll be hosting the 4th Annual Soul Vegan Festival on the sands of Miami Beach on Feb. 26th and 27th! Over 4,000 people attended our last festival and we look forward to yet another great turnout. Of course, we’ll require social distancing and wearing masks to keep everyone happy and safe as some of the nation’s most notable Black vegan chefs and artisans cook up creative and delicious entrees, street food, and snacks. That it’s an outdoor event adds to the security as it relates to social distancing.

Because I’ve had my share of incredible vegan cuisine, I feel comfortable critiquing vegan centered offerings. I love the complexity and challenge of allowing vegetables to taste like themselves as chefs attempt to reimagine meat forward entrees and offerings.

A recent trip to the Rabbit Hole Restaurant changed my mind on the meat substitutions after experiencing the magic created by Chef Samuel Woods, ironically a native of Detroit, my second favorite foodie city.

Chef Samuel showed out with this menu. Most, if not all, of their meat substitutions are imported from various countries and are made from all natural vegan sources. I sampled just about everything, but the standouts we will share with you all here.

My first vegan hot dog was amazing. Its taste and texture were almost indistinguishable from the ubiquitous Coney Island Chili dog of Detroit. I ate the entire thing with a side of AMAZING FRIES that they apparently do something special to because I found them addictive.

After the hot dog magic, we indulged in another crowd favorite, THE CHICKEN WINGS! There were several flavors to choose from, but we settled on the garlic parmesan wings. Let me tell you something. These were the best vegan chicken wings in all of BROWARD COUNTY! Yep, the crunch, texture, look, flavor, and above all else THE TASTE! These wings were so good; they could beat out the real thing at a competition. I am not capping here folks, these babies were a real standout.

Next we had another staple, BBQ ribs, which were tender. Unlike the chewy texture I’ve had at other vegan spots, this was a breath of fresh air. The flavor had a unique bold flavor with a hint of citrus that took the edge off creating a savory sticky BBQ sauce that a smoked baby back would adore.

Next up, the burger, which is so large we split it. The spice will punch you in your face so be careful. The avocado and homemade jam set his item off for me. Chef makes all his sauces and seasonings in house and you can taste the complex, yet nostalgic flavor profiles in both his entrees and accompaniments.

After indulging in Vegan Burger Heaven, we moved on to another vegan meat selection, the meatballs. You better stop this lying chef. Although I was convinced they had to be the real thing, surprisingly, they were plant based. Now Black folk have a vegan option for the repast meatball, baby shower meatball, Mother Geraldine’s 90th Birthday party celebration at Mt. Moriah Baptist Church celebration meatball. You could serve these meatballs at any of these affairs and people would enjoy them. They’re that good.

For those folks who really enjoy vegetable-vegetables, opt for the chicken stir fry. I enjoyed every bite. It was filling and had fresh vegetables seasoned to perfection and served with strips of tender vegan chicken.

They also serve very tasty desserts and a line of delicious juices that are so good I bought two to go. The completely natural juices are created by a Jamaican gentleman who has perfected his craft, using fruit, not that nasty pre-frozen pulp garbage. I want to see these juices in Whole Foods because they need to be enjoyed by everyone. I loved the soursop the best. Admittedly, I was a bit skeptical of the post boasting about how delicious this spot was, since they use meat substitutes. Chef removed every single one of my doubts by masterfully creating a vegan comfort food space certain to rack up notoriety and accolades from customers and critics alike. Give them a call at (954) 419-4899.