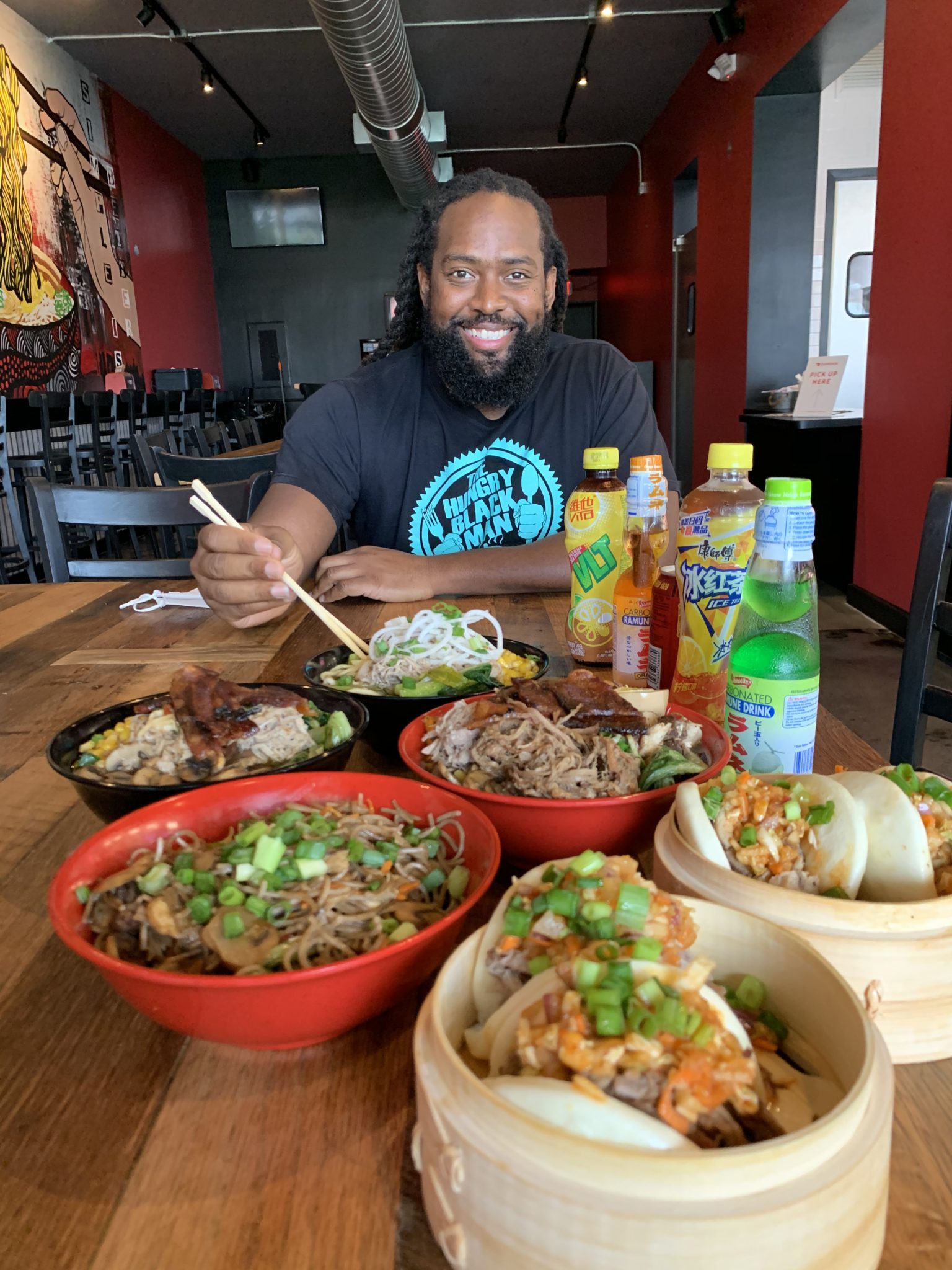 Chef Walter Harris is a kindred spirit because chef is a Blerd. The owner and operator of Noodle Station in Fort Lauderdale is a Black Nerd, a group of free-spirited, free-thinking lovers of everything authentic and thought-provoking. Blerds comprise an estimated 25% of the Black population of the United States.

Within BLERD culture, there are sub categories of interest, like Anime, a dramatic adult cartoon with characters battling one another representing opposing forces with varied philosophies, goals, and objectives. Originated from Japan, Anime pulls Blerds deeper into its origin and culture, which is what happened to Chef Harris. He’s so passionate about Anime and Japanese culture that he visited Japan to further immerse himself into the food and culture.

After returning to the U.S., Chef Harris resolved to open a Japanese Noodle themed business and did just that in February 2020. I recently visited Noodle Station (3045 N. Federal Hwy, #60B, 33306) and I was thoroughly impressed with EVERYTHING! This brother took this theme and delivered authenticity, deliciousness, and thoughtfulness.

Now, for those who have never enjoyed Japanese Noodles, here’s a quick crash course into their deliciousness. Noodle Station serves three of the eight different types of Japanese Noodles – Ramen, Udon, and Soba. Each noodle type is boiled and served in different flavored broths along with various meat and vegetable toppings. Ramen is the most popular and is used in amazing soups. The culinary style of all the broths available here are of the Ramen variety and can be used with other noodle types such as Udon and Soba as well.

Noodle Station’s broths are delicious and can be vegan or non-vegan. Making a delicious ramen isn’t easy especially if it’s made from scratch, like at this swanky eatery. The taste of ramen mainly depends on the soup, and it requires time, effort, and skill to successfully create the hearty meal. Chicken bone, pork bone, dried sardines (niboshi), and/or kombu are used to make soup stock traditionally along with adding vegetables, such as ginger, negi onion, garlic, or/and mushrooms.

The energy in this place is positive and welcoming. Service is incredible and provided by happy staffers and an involved owner who spends every day at this location greeting customers and high fiving his team for everything from washing a dish to washing their hands.

I started my journey with one of their signature bowls, The American Samurai which is combo of Ramen & Rice noodles, 13 hour braised and pulled pork shoulder, hoison apple cider glazed beef brisket & 5 spice chicken, corn, bok choy, cabbage, roasted sweet potato, daikon radish, candied hijiki bacon, mushrooms & egg.  The pork shoulder is succulent and flavorful, the brisket brandishes incredible beefy flavor and the 5 spice chicken add the Asiatic flare with the pulled pork shoulder adding the final touch of meatiness. I absolutely loved the pungent finish with his incredible homemade broth. The veggies and proteins swim around the loaded bowl fighting for dominance, but the bowl is so incredibly balanced that it is an incredibly tasty metaphor of the ancient Chinese belief of yin-yang.

I was literally slurping, gulping, chewing, and reveling in the awesome aromatics from this fragrant and bright entrée, but had to slow down because this bowl was unassumingly filling! Yeah, you only need one bowl if you opt for the American Samurai.

Next we moved on to the Buckwheat Soba noodles, served with bok choy, roasted mushrooms, julienned carrots, scallions & five spiced chicken. This bowl had more of the five-spice flavor pronounced in the most basic sense landing on a licorice-like flavor from the star anise. There were sweet and warm flavors from the cinnamon and fennel along with cloves that add a cooling sensation while Szechuan peppercorns, one of my favorite Asian flavors, added a numbing and peppery note for a fantastic outcome.

All the bowls have their own unique character and soul to them. Even the vegan bowl was hearty and filling. I say “even,” because even though I am avid connoisseur of vegan cuisine, I often find myself nearly starving if the dish was absent rice or heavy carbohydrates. These bowls are filling, flavorful, and healthy. You won’t find any artificial flavors, short cuts, or ultra-processed seasonings at this eatery. Chef Harris says every ingredient is fresh and the proteins are from natural and sustainable sources.

After indulging in the hearty and filling noodle soups and stir fries, we enjoyed another of my Japanese favorites in the soft and delicious Bao dumplings. In high school, my friends and I would travel 25 miles down south and dine at our favorite Din Sum spot, Tropical Chinese for my favorite BBQ pork filled Bao buns. Bao Buns (pronounced “bow”), but also known as a ‘steamed buns’ or even ‘baozi,’ are delicious, warm, and fluffy made with various filling or stuffing wrapped inside a sweet, white dough.

Made with a mix of flour, yeast, sugar, baking powder, milk and oil, the bao is a tad sweeter than its closely related cousin, the dumpling, though still considered a dumpling in and of itself. It is a type of filled bun or bread-like dumpling that originates from Chinese cuisines, but enjoyed throughout Japan as well.

Renowned for being light and fluffy, the perfect bao should be light, round and soft. At Noodle Station, they are FIRE!!!!  You can have your Bao bun filled with everything from veggies if you’re vegan or with their delicious proteins such as their 5-spiced chicken or pork. I chose the pork and the chicken and was more than happy with my decision.

I have gone back several times since our first visit and now am a regular at this unique and tasty concept. Don’t forget to ask for their authentic Japanese juices and sodas, which complement each selection beautifully. I have not had them yet, but I hear the salads are interestingly delicious. Honestly, I don’t have time for no damn salad with these hearty bowls and Bao buns looking me dead in the face.

As a lover of Asian cuisine overall, I am impressed and proud of Chef Harris for stepping out and creating a concept that will continue to grow and provide the needed space for Black chefs serving cuisines outside of our amazing Black American culinary culture. Give them a call at (954) 990-5460 or visit Noodle Station at 3045 N. Federal Hwy, #60B, 33306.

Rapper Yo Gotti's Mothers Day Gift is Now One of Memphis Best Restaurants!