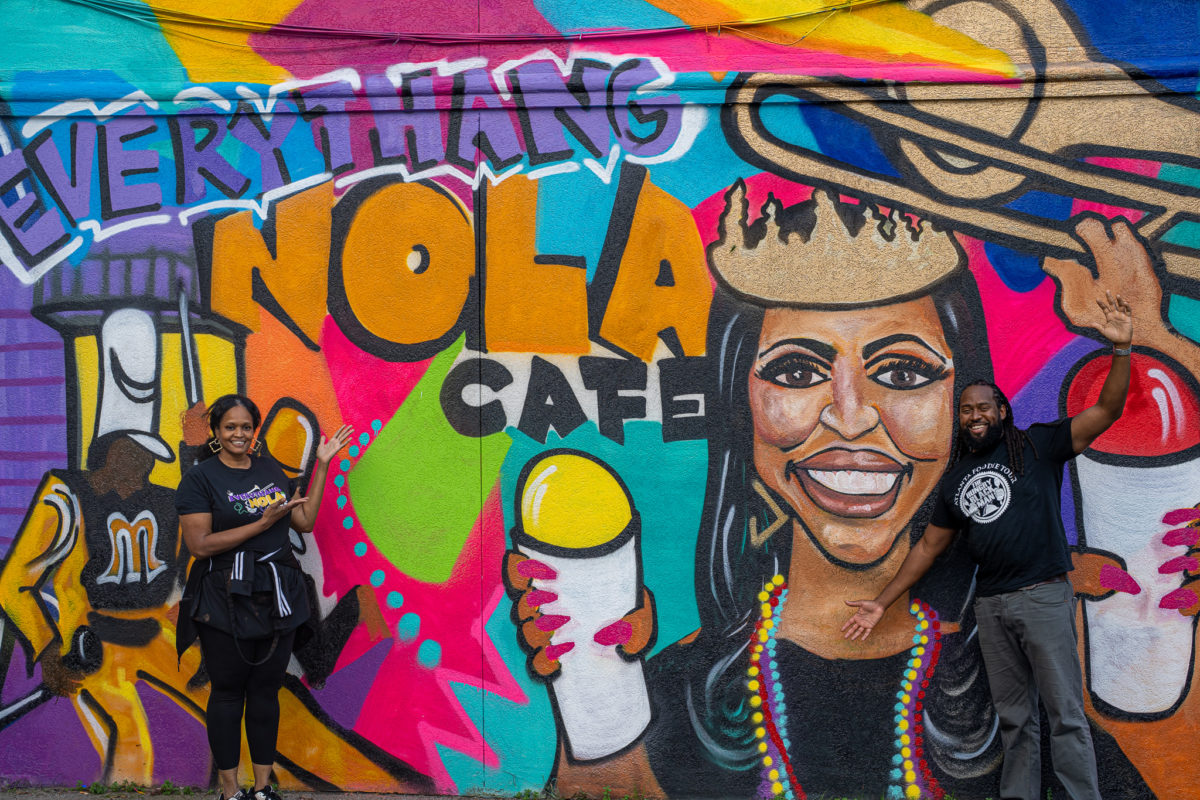 Nestled inside of one of Atlanta’s residential neighborhoods is a small dessert shop with BIG flavor. Everythang Nola, located at 1699 Sylvan Rd SW, Atlanta, GA 30310, is the brainchild of Ms. Keisha Mackey, who left New Orleans in 2005 after the devastation from Hurricane Katrina. She and other evacuees settled in various southern towns outside of Louisiana, bringing with them New Orleans’ rich culinary culture.

The shop is quaint and colorful with a beautiful New Orleans mural outside. The menu is a beautiful mix of in-house made creations, one of which, the delicious Peach Punch was so tasty I took it back to the hotel and spiked it with my favorite gin to create an AMAZING craft cocktail.

But about those desserts! The praline crusted pound cake stood out with its moist richness that made each bite a small decadent piece of dessert heaven. The Red Velvet was classic and tasty, but the pound cake options were my favorite.

The banana pudding was made with chessman cookies, which added a beautiful crisp on top of the vanilla custard that was on the lighter side with a smooth finish. One of my favorites in the city came from this small dessert shop that serves a nice variety of New Orleans’ favorites, including a creamy, sweet, and nutty praline made by another New Orleans native Keisha sources from. Not only delicious, but with nice staying power because when I discovered a leftover bar in my bag when I returned to Miami a week later, it was as good as the first bite.

The star of the show is Keisha’s authentic New Orleans Snowballs, which are different than snow cones. Folks from New Orleans take their snowball machinery seriously! Made with finely shaved ice, instead of the crunchier ice found in snow cones, snowballs soak up the flavored syrup for a smoother, more refined experience.

Everythang Nola’s snowballs are out of this world and insanely delicious, especially their number one seller, the stuffed strawberry cheesecake. Constructed with homemade cheesecake lumped on top of a classic snowball and Keisha’s amazing toppings, this dessert was so decadent I honestly HAD TO SHARE IT because it was too much to eat alone.

To satisfy your sweet tooth while remaining on the healthier side, try a beautiful, tasty, and quite filling acai bowl. If you’ve never tried one, then this would be a great introduction to this ancient superfood. The bowl is constructed using pulped and flash-frozen acai berries which are pureed with other frozen fruit and topped with a variety of fresh fruit, granola, seeds, nuts, peanut butter, etc. The bowls are cold, refreshing, creamy, sorbet-like and boast a deep, complex berry flavor that are flavorful without being too sweet.

Now on the savory side, Keisha and the Atlanta Food Guy created a salmon salad version of the classic tuna salad, but with less mayo and more exciting seasoning on top of a fresh and locally baked vegan bagel. The salmon’s mild flavor absorbed the seasoning blend well, making it a tasty omega-3 packed snack. I recommend having your bagel buttered and toasted because the hot crisp bagel sets this sandwich up for the win! The combo meal includes a drink, the sandwich, and a bag of Elmers Chee Wees, A New Orleans baked cheese curl that comes in a variety of flavors, including Jalapeno Cheddar, my favorite.

This dessert shop was a pleasant surprise on our Atlanta Foodie Tour because it brought culinary greetings from another chocolate city. Keisha hires neighborhood high school and college students whose dedication shows in the service. She has managed to create a beautiful work family with her staff even calling her their work mom. That was enough for me. Everythang Nola promotes deliciousness and community. Check them out the next time you’re in Atlanta or give them a call at (470) 355-2228.