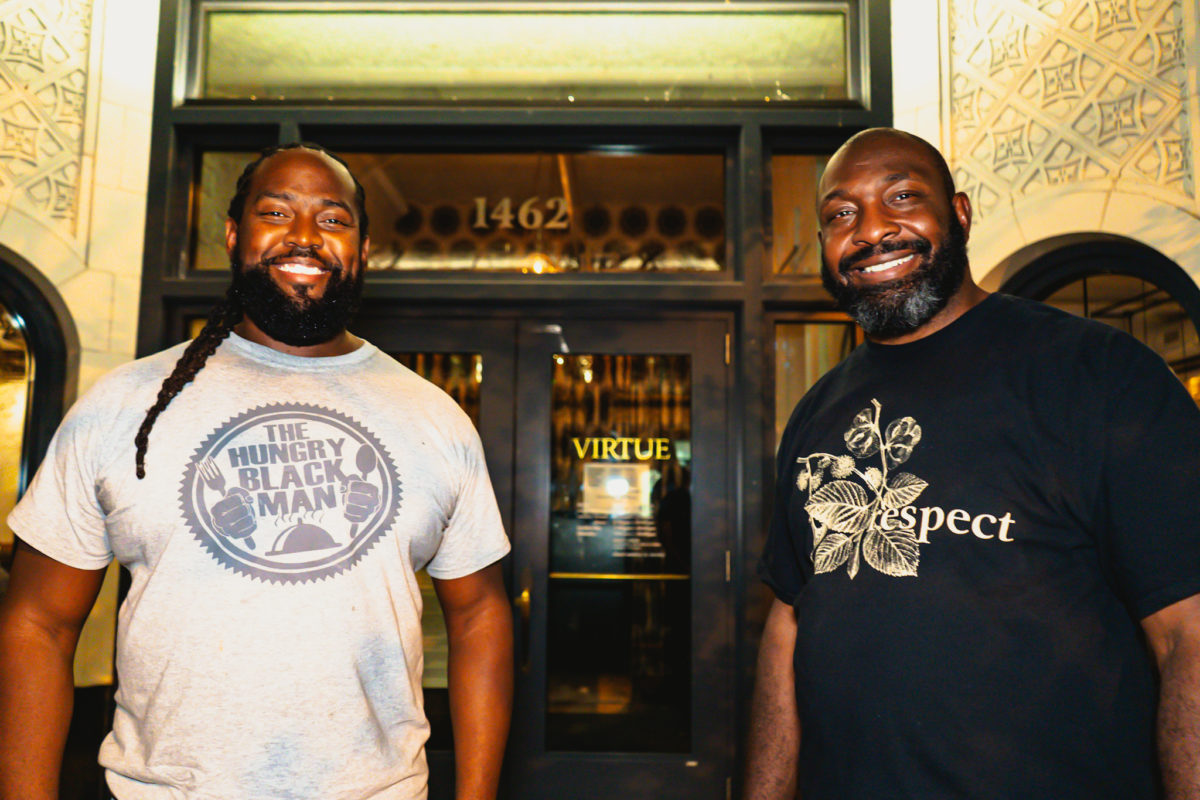 Restaurants should be judged on whether the healthy options can compete with the more decadent ones. At Virtue in the Hyde Park neighborhood on the south side of Chicago, you will find this dynamic and more. Chef Eric Williams is a chef’s chef. An Escoffier chef. A Black man with a heart for his community and a passion for Black excellence.

This restaurant is one of the best restaurants in the nation, not just Chicago. Virtue opened in 2018 and I heard its praises being sung all the way back home in Miami. It took me three years to finally fly up and review it, but the space was so impressive I would have walked. I mean, when you create a salad that has you daydreaming about its flavor and texture in the same lustful way you salivate over a juicy marinated ribeye, then you know there’s something special.

For starters, Chef Williams is one of the most intelligent culinarians I’ve met in my six years of conducing reviews. The space is decorated with consistent reminders of Black Americans’ journey, from dangling tobacco baskets enslaved people used to harvest crops to beautiful paintings depicting heroes like Ida B. Wells and Langston Hughes. As a reminder of how far we’ve come, he has an original fire hose that was used to blast away civil rights protesters. He supports aspiring Black chefs by having them earn leadership roles in the kitchen and management.  It was an honor to share a drink with this brother and hear his wisdom and insight on the state of food for Black America. We don’t have the space to list all of his accolades, but he’s one of “16 Black Chefs Changing Food in America” by the New York Times.

Enough about this Black Man of Excellence, let’s get into my meal for the evening.

The Snow Peas salad is an incredibly delicious bold taste with Mediterranean undertones and a slight heat and smokiness with a beautiful crunch for an evolving texture atop loose headed butter lettuce that heightened its companions with its slightly sweet and astringent flavor. This underpriced ($11) salad didn’t owe me a damn thing because it was one of the best I’ve had in Chicago during out tour. You will not regret ordering this.

Next, we had the tasty fried green tomatoes with a delicious remoulade topping. If you ever had a good fried green tomato, then you will enjoy these. The tomato flesh was slightly tangy complimented by the seasoned crunchy fried coating. The frying process softens the tomato flesh, leaving you with an almost meaty texture most vegans will appreciate.

Following the veggies, we had the blackened catfish and “Carolina Gold” rice that will have you licking the plate. The side of barbeque carrots were perfectly cooked with a nice char, just like the catfish with its beautiful, blackened exterior encasing a super flavor packed white, tender, and meaty flesh with a kick that left me wanting more.

The next dish confirms Chef Williams is OF THE COMMUNITY. Don’t get his experience, education, and work in these upscale kitchens twisted, this brother would cook yo grandma under the table with his MAC AND CHEESE! Bruh, all I’m going to say about this mac and cheese is this – I have been eaten at 600 Black owned restaurants all over the nation in over 18 states and this man has outdone EVERYBODY. Even Mrs. Florence, a 90-year-old veteran with a 60+ year outpost in Oklahoma City.

And he managed to do the exact same thing with the mofo BANANA PUDDING! I came back to the restaurant to sneak an order, but he saw me anyway and laughed. Yeah, I was ashamed because I had eaten 3 bowls the day before and came back for more.  It was just that good. I haven’t had better from a restaurant and the only other Banana pudding that can get with him is from a Queen in South Florida, and even on her best day his wins.

This restaurant is the playbook for what Black culinary excellence looks like. It embodies the cooking traditions of Chef James Hemmings, Hercules, and Edna Lewis and the bar has amazing cocktails and incredible service.

Chicago’s Black owned spaces are some of the most delicious in the nation and this space leads the pack. The ambiance and the community’s reception of it were evident as we walked to our table, observing the spectrum of diners inclusive of the usual suspects like uncomfortable first dates, celebrations of wedding anniversaries, and the closing of business deals by movers and shakers.

As the Hungry Black Man’s team sat in a corner doing an interview, I was again humbled this culinary giant took the time to speak with us for a review of his amazing establishment. It was refreshing that in addition to his esteemed pedigree, unlike many other prestigious chefs, bruh was humble af!