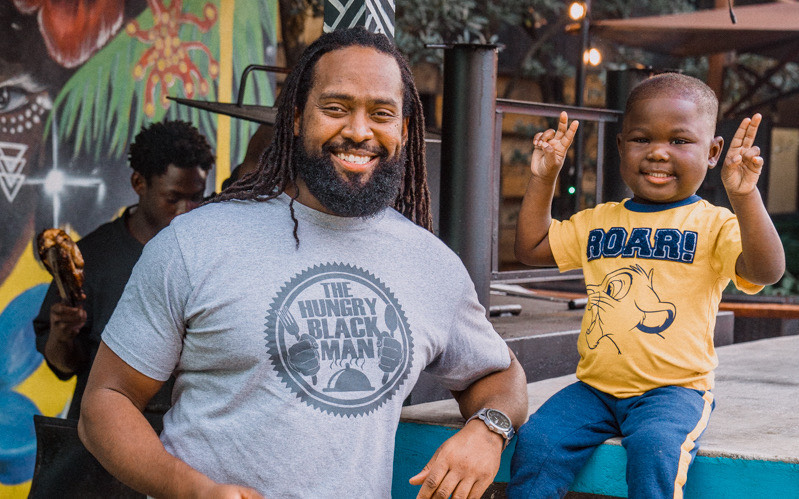 To meet Antwain Lee Fowler (@_antwainsworld), was to love him – instantly. Antwain quickly became one of the world’s youngest and most adorable food personalities when a video of him  (https://youtu.be/nrXACzcyX00) innocently and hilariously asked a question that captured the hearts, eyes and bellies around the world.

Sadly, the pint sized, six-year-old dynamo died Sunday due to a rare autoimmune disease he endured for the past several years. Well-wishers are expressing deep gratitude for the humor, happiness, and joy Antwain delivered with his infectious laughter, innocent anecdotes, and unrivaled honesty.

As soon as I saw the video, I knew I had to meet him.  Because we’re a food media company focused on the Black food and drink ecosystem, I was excited to take little Antwain along as our team visited a restaurant for a review in our shared hometown of Miami. Antwain was as Miami as one could be with his known dance moves and Miami swagger. His mother, Ms. Christina Burns (@_chinablaq) agreed to bring lil man and the two of them joined us at Dukanoo Jamaican Kitchen in Wynwood. I was planning to teach the little king a real-life lesson on food critiquing I felt would spark his interest as a young food writer. He definitely had potential.

Little did I know, it would be Christina and Antwain who would teach me. You see, that day Antwain was living up to a five-year-old’s job description – he was super active, talkative and bouncing all over the place. The car ride to the restaurant and the entire day with Antwain reminded me just how terrible I was with small kids. His energy oozed effortlessly and abundantly, with him jumping on sofas and running from his mom, who gracefully guided him back to her side. Her patience with him was remarkable while my judgmental perspective had me about to demand a few push-ups to burn off some of that energy and calm him down. Man was I wrong. Check out Antwains first day as a critic here: http:/www.youtube.com/watch?v=737V5yNB0z8&t=17s

Christina has other children and explained that she parents each child differently, according to who they are. She said there was no template for raising her kids. That alone was powerful. The way she treated Antwain was even more special because of his medical condition.

Once the video went viral, her parenting style was often under attack. Christina received angry messages and comments from strangers who thought they knew how she should raise Antwain. Many criticized her for allowing him to eat unhealthy food and some thought she should be stricter in curtailing his youthful exuberance. They had no idea what this baby was going through. In and out of hospitals and enduring over 25 surgeries, lil man was a solider and mom was a general.

This Black Queen was not only one of the best mothers I’ve ever met, but, in actuality, she represents an ideal way Black mothers should raise Black sons, without the white gaze and absent the generational expectations of parents from a punitive perspective.

She was permitting Antwain to be unmitigated by others’ assumptions that his creativity, activism, and exploration should be curtailed. She didn’t slap him or scorn him for asking questions about the world and his surroundings. And she didn’t discourage him from asking the question five-year-olds have mastered – “WHY?” She allowed him to be himself, which was instrumental in millions of people resonating with his candid joy and humor.

Mindful of her baby’s medical challenges, Christina granted him as much joy as possible, including leeway with his dining choices. She gave him space to his five-year-old self while teaching him age-appropriate respect for others.

To the contrary, from the minute our time together started I got busy trying to impose rules for how he should behave, essentially attempting to restrict the very freedom that was a natural part of his life. I did not realize the freedom little Antwain enjoyed in his six years of life to be himself, unapologetic, to express himself unmitigated, was more than many adult Black men will experience in their entire lives.  Undeterred, Antwain began critiquing the restaurant, including hilarious complaints about how long it was taking to serve the food. But in typical Antwain style, he also offered a solution. Antwain suggested that the restaurant provide appetizers to welcome guests while they waited, and he was absolutely right. That would remedy the issue, but as I sat there literally thinking the same thing, I didn’t dare say it.

Antwain taught me a powerful lesson. Previously, I followed an unwritten policy to only publish positive reviews, but this little prince helped me realize I’m doing a disservice to my subscribers by not sharing the good and the bad. Antwain’s honesty has already impacted Hungry Black Man reviews, which now include restaurants I like as well as those I don’t. Antwain helped me to see I was doing restaurants with poor service and tasteless food a disservice. They can’t improve if they don’t know what needs improving.

As our day wore on, Antwain was still being his energetic self. I tried to control his behavior by having him sit next to me. Not only did that not work, but it also caused Antwain to announce something he had apparently been thinking, “MR., YOU BORING,” before rolling around on the couch. His mother laughed, amused by our bantering, even though I clearly wasn’t (see the photos.)

I went to the bathroom to laugh out loud at this kid calling me boring, echoing the sentiments of followers complaining about my long-winded reviews. While I cracked up laughing, I had to admit he was right. Not only that, Antwain freed me to be more myself and less of what I thought folks want to see and hear from a critic.

Once the food came out, Antwain went into full critic mode, unapologetically assessing his food. His mother warned us that Antwain’s honesty was legendary and that he simply did not sugarcoat anything. If he doesn’t like something, he’s speaking up. And dude did not hold back! Antwain let you know with, “THIS NASTY,” or “THIS SPICY,” or even, “THIS GOOD!” I was embarrassed that I couldn’t be as real as Antwain.

His mother watched with pride as he fearlessly offered amateur critiques on flavors while sharing his opinion of the restaurant. When I asked her “is he was always like that,” she said “he doesn’t know any other way to be.” The power in her statement stopped me in my tracks. Ideally, all little Black boys should be free to be themselves. Antwain’s freedom was possible because his mother insisted on it, not the easiest feat for Black boys and men in a country that criminalizes childhood behavior.

Antwain was a breath of fresh air. He was Black boy joy personified, a constant reminder to live life to the fullest without sweating the small stuff. He epitomized so much more than being honest about your food, he emphasized the importance of being fully present when you’re dining with your friends and family, putting the cell phone down and savoring real moments. Antwain wasn’t whining about playing phone games or trying to stick his face in a children’s show. He was there. He expressed himself and wanted to hear from others. He wanted to learn and experience.

I have buried many children, most killed by gun violence. With each loss, I was so angry it blocked my tears from flowing. But Antwain’s death landed differently. Hearing that he was gone had me sobbing uncontrollably. It hit hard. I feel deep sadness for him, his mother and their family. And honestly, a part of me mourns what would have been an awesome experience for him as a budding food critic.

He was such a beautiful light, and he made a BIG IMPACT in a short period. With the state of affairs in this country, Antwain provided Black America a reprieve from the pain. Apparently, he has accomplished the assignment he was born to complete, but his cheer and joy will live on forever as those of us touched by his freedom seek to capture it in our own lives.  I strive everyday to be as free and genuinely happy as Antwain.

Please consider donating to his mother during this difficult time by sending anything you can offer to: Cash App: $AntwainsWorld6 or [email protected]: @Antwain-Fowler-1. Or donate to the go fund me at https://www.gofundme.com/f/fighting-with-antwain.

Make sure you follow us on social @thehungryblackman and subscribe to our blog by inputting your email for Black owned deliciousness around the country! Contact us at [email protected]