Follow us @thehungryblackman on Facebook or IG to add amazing Black owned eateries across the United States to your foodie-indulgence list! Or subscribe to our blog by placing your email below for up-to-date emails and newsletters.

NEW ORLEANS, LA – If you’ve been craving Black owned restaurants that can compete with more formal spots like Flemings Steakhouse, Ruth Chris, Hillstone’s and Lawry’s Steakhouse, head to New Orleans! Located right in the heart of the city, Neyow’s XL is owned and operated by Chef Tanya Dubuclet, the beautiful Black woman who also owns the popular Neyow’s Creole Café.

Her team will need to execute some strategic marketing to distinguish the two because many of the people I encountered were confused, thinking I was referring to the café when I was raving about the new upscale restaurant. The space is dark, serious, and intimate with a baby grand piano and a lady singing during dinner, which adds an enjoyable and beautiful touch to this classy space.

The chef was so busy we couldn’t meet him, but we had a great time with Chef Tanya Dubuclet, who’s in charge of the side items. We dined at the window seat overlooking the street, great for people-watching if you’re bored, which will be difficult once you taste the amazing cuisine.

The first item we tried was the Spicy Shrimp ($22). Served with an inhouse made spiced sweet sauce, the colossal fried shrimp were locally sourced from the Gulf and full of fresh flavor. The slight flavor variations were the result of the inhouse seasoning that all came together with a pronounced crunch from the lightly seasoned batter. The plate is definitely sharable, with shrimp so large that just one can give two people a sizeable bite. Our team of three tasted one shrimp and you get a couple of these babies!

I knew from there things would only get better, and they did. Next up was the star of the night! The Crawfish Mac & Cheese ($12.00) was out of this world delicious. Chef Tanya created this dish with sophistication and nostalgia in mind, marrying the pasta and seafood so perfectly that, aside from Chef Eric Williams of Chicago, I haven’t had a macaroni and cheese that memorable.

The dish has a crisp butter topping and a flavor filled sauce that supports the crawfish meat beautifully. The crawfish tastes like a combination of lobster, crab and shrimp, but with less salinity and more sweetness that interacted with the seasoning and the dairy’s sweetness for one of the best mac and cheeses we’ve had in the country. The price also made me happy because each time I visit, I’m eating two! I don’t care if you start with all that “Starex, you so greedy stuff!” I DON’T CARE, I’M GETTING TWO OF THEM!

Next up was the boss dish, USDA Prime 16oz Ribeye ($60.00) with maitre d’ butter. Ample enough to share between two people, in fact, the portions for most of the menu items make sharing easy. We ordered our steak “medium plus,” which comes with a slight pink inside, no blood. The seasoning or marinade entrenched the flavor, and the butter took this steak OVER THE TOP! It was just as good the following day when I enjoyed it in my hotel room.

Our sides for the steak entrée were the asparagus and the sweet potato soufflé, one of the best in the city. It invoked a grandma flavor but with industry culinary mastery and a crunchy decadent and buttery topping reminiscent of the crunch crumbs on a really good coffee cake or cheese danish, just bigger. Eating it with the topping just makes you happy, which seemed to be the theme with the Neyow’s XL’s happiness inducing food, atmosphere and service.

Next, we had the Red Snapper ($59.00)—a whole perfectly seasoned fish. I know folks use that term a lot. What is perfection? Well, for us, it was the balance between saltiness and spice that allowed the fish to be well supported by their house made lemon butter sauce. The chef knew and delivered the assignment.

My only recommendation would be to get the bearnaise sauce because it fits better with that delicious batter. This was one of my favorite fried fish entrees in the city. The light seasoning allowed the sauce to truly create an evolution of flavor, landing the ole one two punch!

For dessert Tanya was not playing games by tapping her family to serve as the pastry chef. The slice of chocolate cake is so big, if you went to dinner with three other people, you could cut this cake in four and be just fine with your portion.

The chocolate’s main ingredient is endorphins-releasing coco, the “feel good” chemical that lightens moods and helps us feel better after eating it. There is science behind this man! On top of that, the cake was moist, decadent, and melted quickly, with a smooth, velvety texture and pleasant flavor. 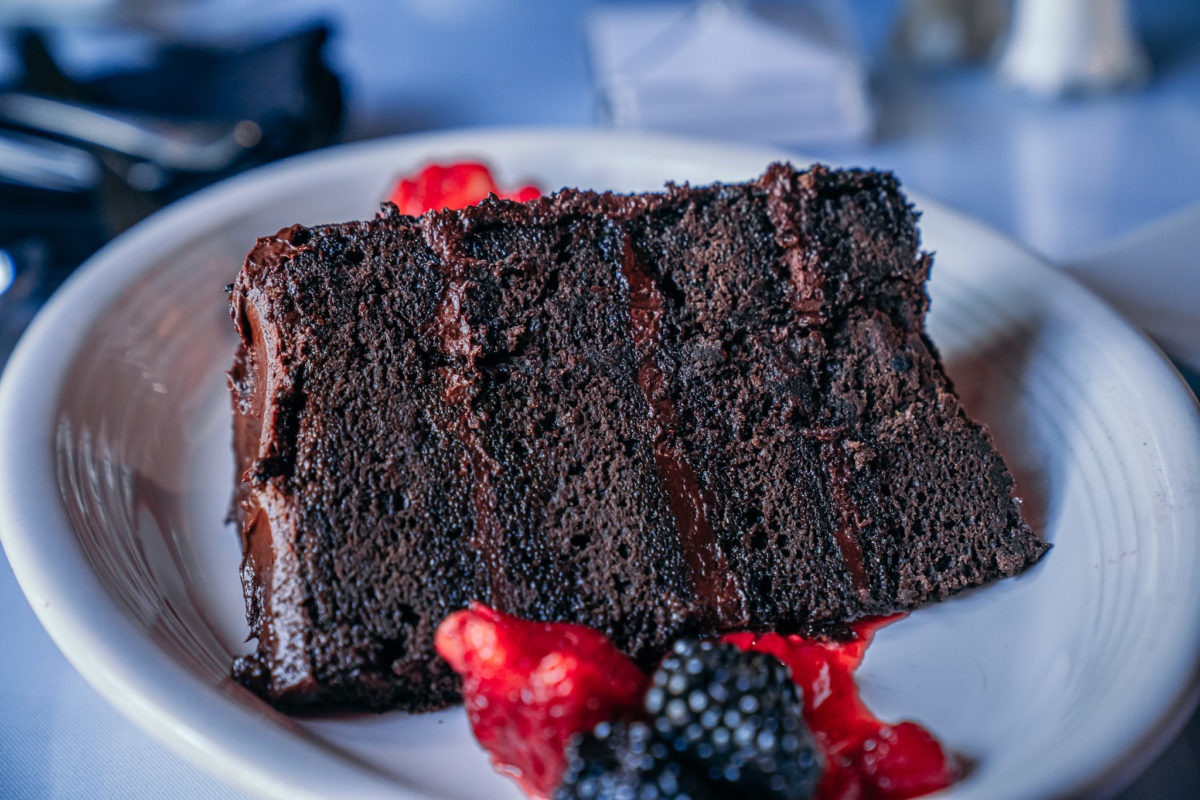 The lingering aftertaste is perfect with a cup of coffee or an after-dinner gin-based cocktail. Speaking of cocktails, listen, this mixologist is old school of the Thomas Bullock type. The drink was exceptional, allowing the gin’s natural botanicals to be fully present while infusing each berry’s tartness and sweetness.

Neyow’s XL is one of the best restaurants in the city. We had no complaints and give it five out of five stars. The service was exceptional, and the food was out of this world delicious with oversized portions, leather seats and white tablecloths. The bar was serving up amazing craft cocktails with a woman playing a baby grand piano. Yeah, you need to go and soon. It’s worth coordinating a weekend getaway just to eat here, (and a couple other Black owned spots that we will be dropping soon.)

I Missed My Flight Back Home From Louisville, KY O

You DO NOT Wanna Leave Harlem , Or Even NY Period

NEW YORK WE HERE 🥳🥳 If You Catch Your Self