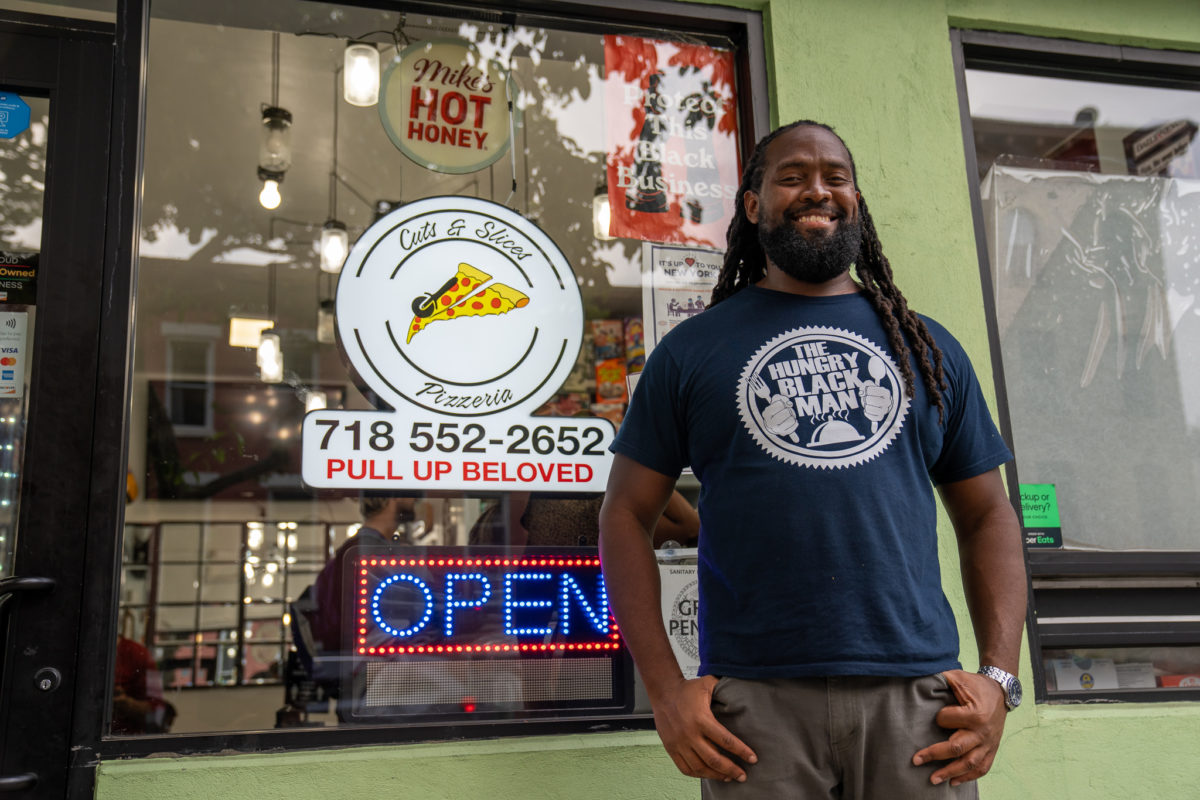 Follow us @thehungryblackman on Facebook or IG to add amazing Black owned eateries across the United States to your foodie-indulgence list! Or subscribe to our blog by placing your email below for up-to-date emails and newsletters.

Anyone who knows a thing or two about the history of New York’s pizza scene is familiar with the opening of America’s first pizzeria, Lombardi’s, by Gennaro Lombardi in the Little Italy neighborhood of Manhattan in 1905. The pie was pretty much an Italian neighborhood staple until 1944, when the New York Times blasted it to the world coining the word “pizza” for the non-Italian community.

Today, tourists flock to New York to visit classic spots and newcomers churning out delicious and creative slices. The Hungry Black Man team recently paid a visit to the Big Apple, visiting great pizzerias in the different boroughs and found some pretty tasty pies. The best was at a small Black owned spot in Brooklyn called Cuts and Slices located at 93 Howard Ave, Brooklyn, NY 11233.

Despite serving up innovative and absolutely delicious pizzas, you won’t find Cuts and Slices on any greatest pizza list, which I found interesting. Publications like Eater, Thrillist, The Infatuation, Time Out, and other reputable food-based media outlets gave no mention, however, Cuts and Slices could easily take down the pizzerias that do appear on those lists. My point is not to accuse anyone of omitting Cuts and Slices. I’m simply insisting that it SHOULD BE ON THESE LIST BECAUSE IT IS DEFINITELY ONE OF THE CITY’S BEST PIZZA SPOTS!

To emphasize my point, consider this. When you Google “best fried chicken” in any town in America, often Black cooks, chefs, and restauranters are completely absent despite being the originators of the Southern American style fried chicken and its nostalgic flavor. If reviewers have no qualms recognizing white chefs and cooks when it comes to identifying the best fried chicken in the nation, why can’t the best pizza come from the ovens of Black founders?

It should and here’s why.

Cuts and Slices’ pizza dough is a star and is so complexly flavored that you will savor both the pizza and its Cornicione, which is a bit airy with a crispy and slightly crunchy outside, yet soft on the inside that will have you craving just the crust! What I really appreciated about the pizza was its ability to be innovative and yet not abandon the essence of its Italian roots. 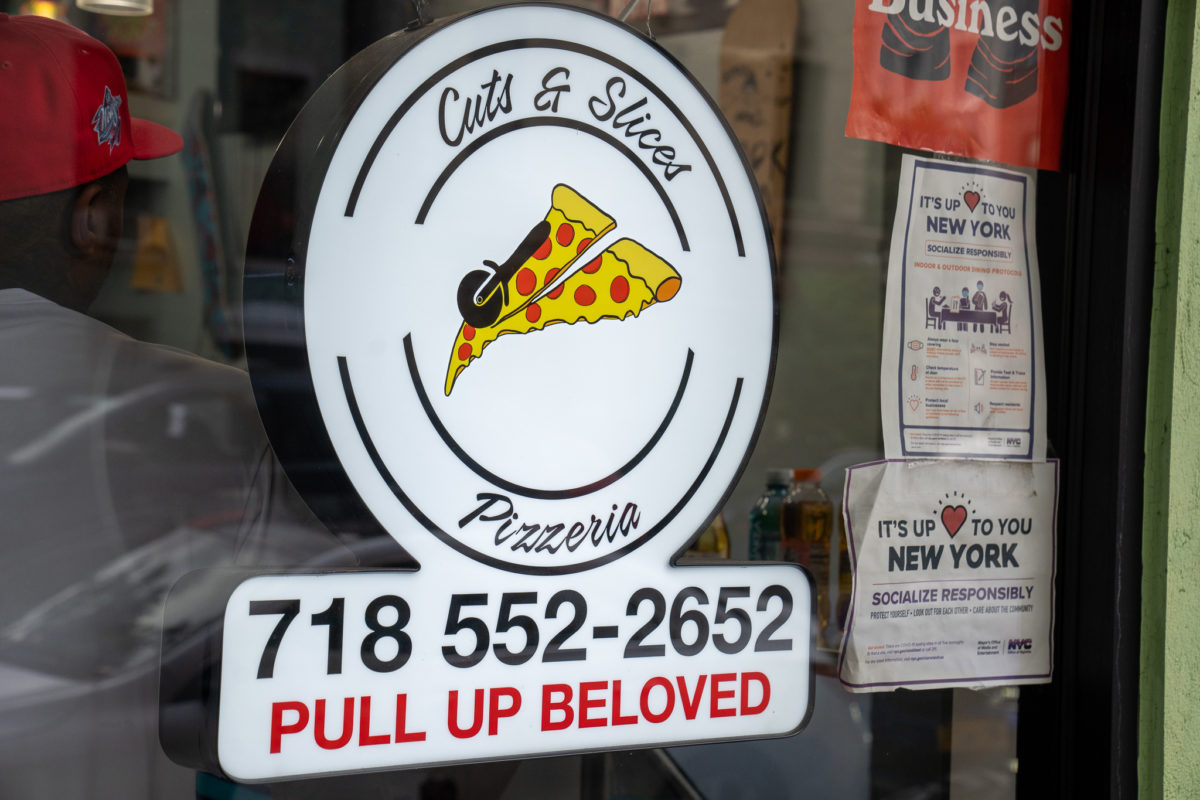 Our first slice was the showstopper. The Sweet Chili Oxtail Pizza is worth every dime of its hefty $11 per slice price tag.  When I bit into the pizza, I thought I was high, but remembered I had neither smoked nor taken an edible. Nah, this was my sober brain going into a food coma. This pizza was so good I felt high.

Like, seriously. The oxtail was super tender and packed with a distinct flavor distributed throughout the entire slice. The sweet chili sauce was a mix between heat and sweet like a chili and a plum had a baby. The low fire level allowed for a beautiful marriage of flavor with just a slight spice finish. Its chutney vibes worked so beautifully I’d put my money on this to beat out many of the spots being touted as the city’s best for sure.

The second-best pizza on the menu would be the Jerk Chicken pizza at $7 per slice. This pizza was so damn good I was peeking in the kitchen to see exactly what was happening in there. The meshing of the sauce, cheese, and fiery jerk seasoning had this pizza create a culinary equilibrium of sweet and savory that was borderline celestial. This recipe couldn’t be the work of humans.

Trust me, I asked the staff who was making the pizzas, but they were a bit tight lipped about the chef or creator. I need to know so I can give this culinary genius their flowers. I also want to encourage fellow reviewers to check them out because this memorable pizza belongs on several of New York’s “best of” lists.

Our other selection was the garlic parmesan shrimp, which was good, but nowhere near worth $10 a slice. It was tasty, but basic. The Turkey Bacon Ranch pizza was another star for me, especially with the rich, flavorful ranch sauce. They have amazing vegan options, as well.

Our New York Foodie trip to explore the Black food ecosystem was a bit challenged. We plan to return to really dive deeper into the scene. We ate at a total of 30 Black owned spaces and Cuts and Slices was by far the most memorable and crave worthy. I hope the city’s food writers will be fair and place this shop where it belongs, as one of New York City’s Best Pizzerias. You can give them a call at (718) 552-2652.