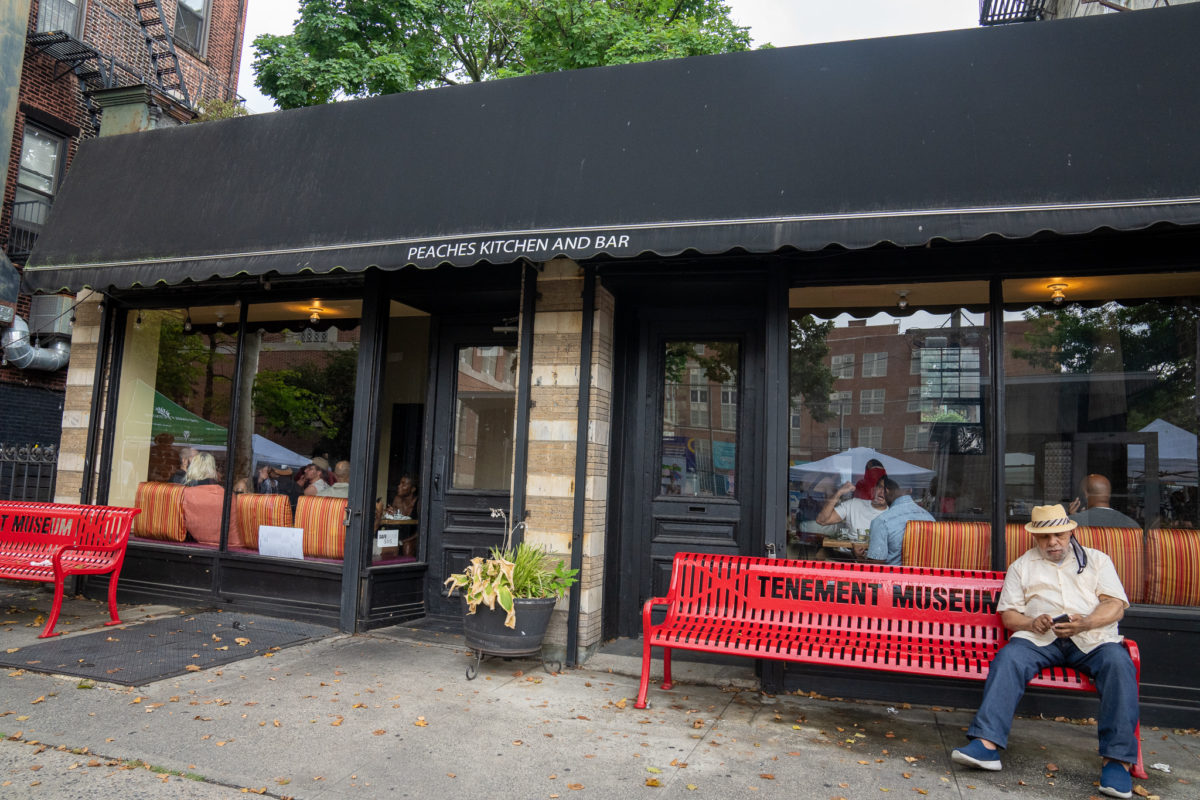 New Yorkers are very proud of their diverse and robust food scene, even though the city’s dining notoriety is primarily focused on European and Asian influences. With the exception of perhaps chicken and waffles from Harlem, you don’t hear about folk heading to New York for amazing BBQ or BOMB soul food.

Based on recommendations from city natives who swear that the Big Apple most definitely has serious gems rooted in Southern cooking, (among them, legendary staples like Charles Pan Fried Chicken and Melba’s), we took off on a Black Foodie Food Tour in New York.

First stop, Peaches located at 393 Lewis Ave, Brooklyn, NY 11233. We navigated New York’s hideous traffic and public transportation to get to what natives guaranteed would be an amazing dining experience. I was excited to see that the place was packed with a line stretching out the door, but after waiting patiently for an hour to get our food, I was reminded that judging a book by its cover is sometimes a mistake.

We ordered the salmon croquettes, skillet potatoes, salmon egg scrabble with toast, and steak and eggs. The eggs were tasty and scrambled soft as requested. The steak on the other hand was chewier than Wrigley’s spearmint gum. Not only was the steak so tough that our faces started to ache, but it also lacked flavor.

Next up was the salmon croquette, oddly served on top of black beans and corn. I have no idea what the logic was since it deviated so far from its soulful iteration. The salmon was constructed in a large patty resembling a lump crab cake with raw bell peppers and onions and some sort of remoulade sauce for dipping. The texture was mushy and soft in the center with an unwelcomed fishy flavor.  On top of that, the temperature was inconsistent with the center colder than it should have been.

The raw veggies became invasive and did not complement the patty. Instead of lending solo flavor, they warred with the fishy taste of slightly underheated shredded salmon. Because I could not figure out what the corn and black beans were doing under there, I ordered a side of grits. Since that’s the traditional way Black Americans enjoy salmon croquettes, I was hoping for some redemption. What a mistake. Those grits tasted like the Quaker man on the grits box made them himself in1781. Maybe I should have tried the croquettes with the corn and black beans.

Following the salmon croquettes, we had the extremely underwhelming breakfast potatoes. They tasted like what I would imagine a poor Irish family would have enjoyed during the potato famine in the 19th century, but definitely not in a restaurant promising southern cooking with a modern twist. The cook’s intention for these potatoes remains a mystery. They were dropped in the deep fryer and plated without a spec of seasoning. Like, how could you serve potatoes and not season them at all?

Last, and least, was the salmon egg scramble, reminiscent of something your recently released from prison cousin might make after rummaging through the fridge. It definitely gave me “spread” vibes. Even the toast was lacking. It was more like slices of room temperature bread masquerading as toast.

The space brands itself as Southern Cuisine with a modern twist, and I can see that they twisted the flavor and soul out of just about every option. I can imagine by their incredible customer base, that it had to be good at some point and lost its way. I hope management can figure out how to turn the flavors around so that new customers can see what created the magic to begin with because what our team had was not worth the price tag nor the arduous trip to get there.

Our First Stop In Philly Was @rocknflavors_ On Sou

I’m Sorry For Flooding You All With Detroit Post

I Definitely Have A Thing For Costa Rican Empanada