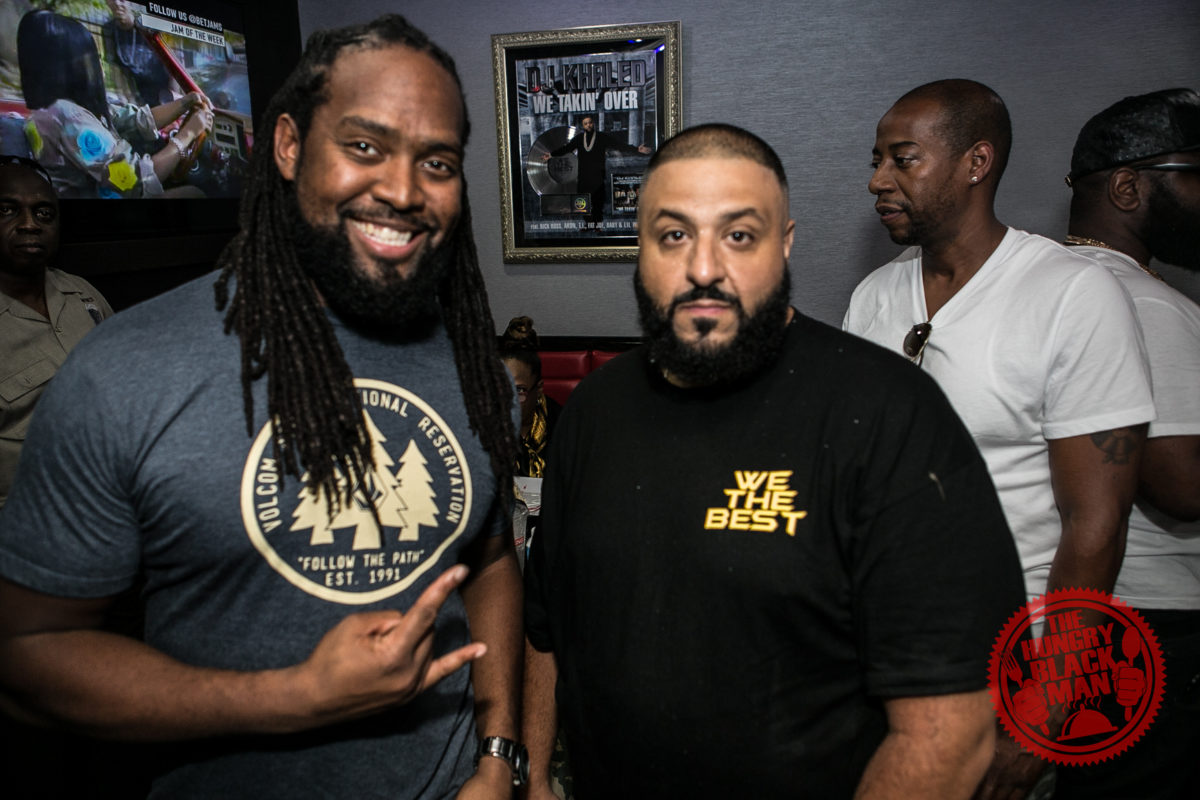 Khaled Mohamed Khaled, professionally known as DJ Khaled is one of my favorite people. It is not because he is a successful (SUCCESS!!!) record producer, radio personality, DJ, and record label executive, but because he is the example of what the rich and famous can do in supporting small businesses, startups, and economic progression in developing urban communities.  As I review small to mid-sized restaurants, businesses, and services, a resounding mantra from black and brown entrepreneurs was a need for financial and technical investment.  At one point, the owner of a Miami eatery I reviewed became emotional in sharing his experience, “I heard of racism, but honestly never felt it until I opened my business.  I have no access to capital or lines of credit.  Industry gatekeepers do their best to keep me shut out.  I am hoping for the day, where as a black man, I can be treated the same as my counterparts by investors, bankers, and venture capitalists.”  Understanding why start-ups and small businesses (specifically black businesses) battle stigmatization and stereotyping that negatively affects their reception and perception, is needed to even begin a conversation on why many black and small businesses do not succeed.  DJ Khaled is doing an exceptional job along with Rick Ross, and even Uncle Luke, in reviving the spirit of Black Wall Street and supporting urban communities with their words and their dollars.

Many Black business owners admitted to our team their hesitation of using their likeness as owners in our blog and articles with the fear of people discontinuing their support (That made me depressed, so I ordered my favorite gin, Hendricks, to calm my nerves). I assured them that would not happen because their businesses were great and should be celebrated because of just that. They are great businesses who have earned the admiration of customers based off their exceptional service and products, in lieu of their race, or support out of social obligation. I convinced them to be photographed in their establishments, and be proud of who they are and what they have accomplished.  It was moving to see them own their success and be proud of the duality of being black and a successful entrepreneur.  I feel it’s important to have a social conscious, but I would like to have both! To me, having a social conscious and great service is the ultimate goal.  It was exactly what Mr. Khaled displayed along with his partners E-Class and Tasha, as they stood in the pouring rain outside their eatery handing out book bags, autographs, and other goodies to youth and customers.  I was so impressed by their selflessness in serving both their customers and strangers who attended a community day sponsored by the trio.

Having the best of both mind sets, is the goal.  I expect great service from a business regardless of race. I have had bad experiences from a plethora of businesses and in no way, have I ever contributed it to race. I hate when people demonize black, minority, or small businesses.  Black/Brown people do not have a disproportionate amount of businesses that are badly run. It seems that when people experience one bad service by minorities, they do what most people do, and GENERALIZE an entire race. That is dead wrong. If you experienced negative service in an economically challenged community, do not attribute that negative experience to an entire race simply because a particular member of that race is represented in that locale, and the same goes for expecting positive experiences in affluent areas.  The issues are simply access, education, and capital. With the right support, businesses can flourish and urban communities can grow just as the small community in Tulsa, Oklahoma did in the early 20th century.  It was one of the most successful and wealthiest black communities in the United States and was popularly known as America’s Black Wall Street.  By investing in worthy businesses, Khaled and his partners are helping to provide jobs and opportunities to local folk.  At Finga Licking, the lowest paid staffer makes well over the state’s minimum wage.  DJ Khaled and his partners are keeping the mindset of Black Wall Street alive and well in South Florida through strategic investments and expanded opportunities.

The black community in South Florida is extremely marginalized—even more so by language and cultural barriers, given the huge amount of Spanish speakers.   This reality has created an uphill battle for small businesses and black entrepreneurs to break through the crowded field of businesses, especially restaurants. DJ Khaled understood something very simple: Investing in high-growth companies creates jobs while generating more wealth for investors, regardless of the race or locale of the business.  He didn’t go on a rant about perceived abilities of black people. He didn’t come to the inner city and urban communities just for strip clubs and the occasional turkey giveaway or to shoot a video with stereotypical black hood images.  He came and put his money where his huge mouth is.  He set the example for local celebrities and rich folk looking to invest and grow their wealth, while supporting local economies.  He didn’t go to South Beach and open some high end restaurant out of reach by common folk.  He didn’t start some expensive clothing, tie, or shoe brand that entices poor people to pay crazy prices for items they don’t need, but will strive to purchase it anyway due to the pressures of materialism and the media.  He did none of those regressive things.  He partnered with E-Class and Tasha, both Black Americans, and opened Finga Licking—a Miami Gardens based hip hop themed restaurant.

I had the privilege to ask Khaled a few questions as to why he decided to invest in the Finga Licking brand.  His response was humbling and nothing short of amazing. “It’s so important to give back and invest. It’s not just about money.  It’s about recognizing value.  I value my community, and it brings me joy to see great food and opportunity being provided to my people.  E-Class approached me and I was impressed by the foods and I went in. This is my hood.  I use to sell CD’s right around the corner from here.  I know what it is to struggle, that’s why giving back brings me joy.” Rick Ross and even Luther Campbell (Uncle Luke) have also felt the Black Wall Street spirit in opening a number of eateries within urban communities in South Florida and abroad.  Each of them hired from within the communities they serve along with recruiting Black and Brown professionals to assist in growing their brands on both the executive and operational level.  DJ Khaled even has an African-American female personal chef, Chef D, who is a celebrity in her own respects.  Collectively, Finga Licking employs over seventy-five (75) employees and has expanded into several locales in South Florida with plans on opening another in Fort Lauderdale in the coming months.  What is it that makes DJ Khaled, Rick Ross, and Uncle Luke see what most celebrities, venture capitalist, and investors have not? Why did they decide to invest in their communities? Good business sense is why.  They each saw great opportunities regardless of race. There is genius in black and brown communities.  They just need opportunities to succeed.

From now on, let’s highlight, praise, and focus on celebrities and wealthy folks who are doing what’s right! We spend so much time lamenting over the football guys, Kyrie Irving, Michael Jordan, and the list goes on and on. I can speak as a native Miamian, in that I am proud of DJ Khaled, Rick Ross, and Uncle Luke for seeing what I have had the opportunity to experience through reviewing some wonderful establishments like Signature Cigar Lounge in Miami Gardens, Cupcake Galleria in Davie, The Foxy Brown in Fort Lauderdale, and others.

I challenge (I know I’m a nobody to the rich and famous, but I’m going to talk anyway) the NFL rookies to take their respective team initiation dinners to a small or minority owned establishment rather than these high price restaurants who doesn’t need their money anyway.  The rookies spend thousands of dollars as an initiation, inviting veteran players to dine with them.  These dinners gets me so mad. These athletes sit and take pictures of egregious receipts after indulging at super high end restaurants, while small and minority businesses would be able to grow and expand from just one of these outlandish initiation dinners.  I challenge the shot callers to have their dinners at small-mid sized restaurants.  That infusion of cash could mean a difference of hiring or laying off an employee whose family depends on a paycheck.  I challenge pro ballers to forego spending thousands of dollars for just ONE WEEKEND at the strip clubs, and take a look at my blog, and other bloggers who review and highlight phenomenal startups, mom and pops, small-mid-sized minority owned companies—and actually invest.  That one weekend absent from the club can change lives. Can change a community. Can change a local economy.

Yes, I am a financial adviser today giving free advice to these guys, and if their people have a problem, tell them to email me. They obviously don’t know what they’re talking about anyway if these rich folks aren’t doing what Khaled, Ross, and Luke are doing. Jobs, wealth building, and pride are what DJ Khaled has brought back to his community.  Let’s celebrate him and others like him, and encourage our peers, families, and rich folk we have access to, to do the same.  Don’t just go out with them to get a free meal, sit in the VIP section, and bask in their fame, encourage them to be like E-Class and DJ Khaled.  Let’s all be like DJ Khaled and help to promote a renewed Greenwood for the 21st Century.