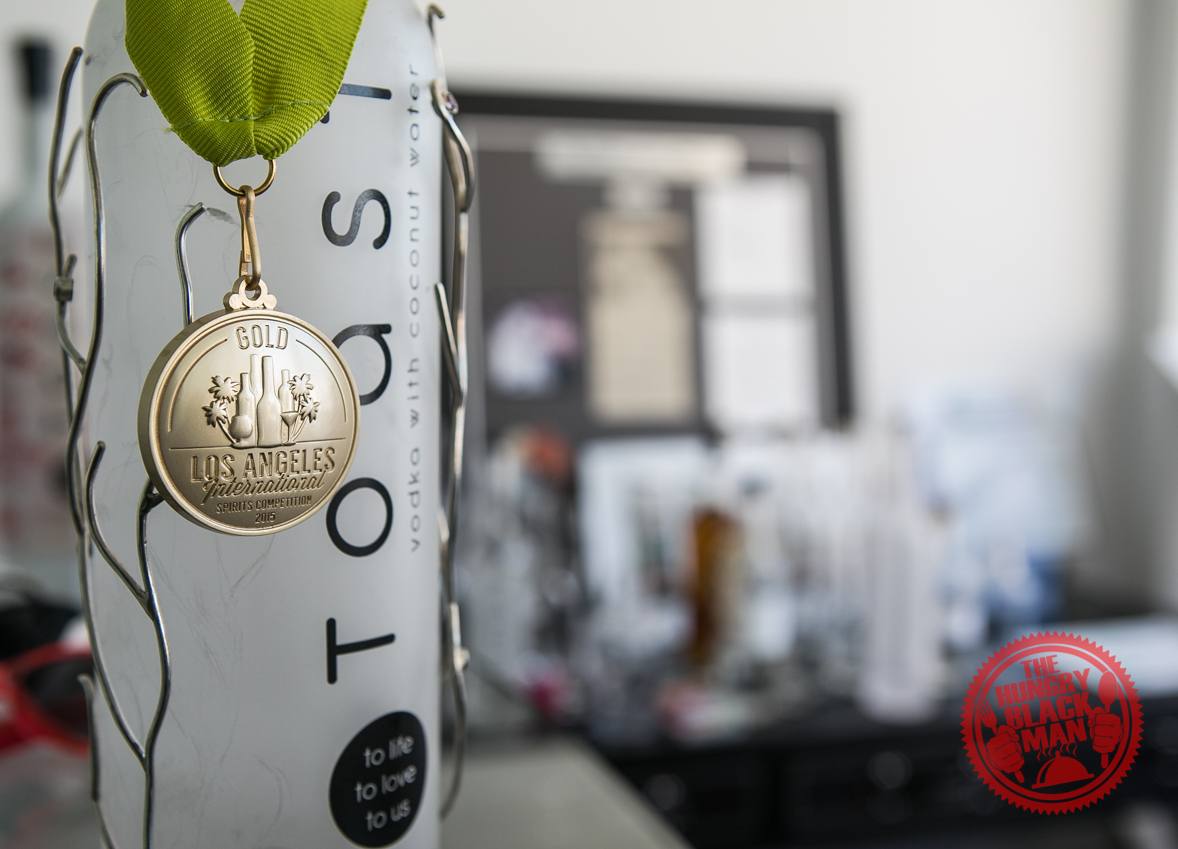 In college I remember having my first alcoholic drink.  I hated the taste of alcohol.  Then I got a job at Shula’s Steakhouse and met Ms. Rhonda, an amazing bartender who taught me how and what to drink, among other things.  I was only 21, she was 35, and she introduced me to a whole new world that turned me into a lover of wine and spirits.

Soon spirit and wine festivals, competitions, mixologist and tasting courses, along with educational workshops were a part of my social life.  I wanted to learn and immerse myself in this new brave world.  This thirst (literally and figuratively), became the groundwork for “Thehungryblackman” in many respects.

Years later, I began hosting a monthly supper club where I created a featured cocktail.  After a friend recommended I give Toast Vodka a try, I reluctantly obliged, only to be pleasantly surprised.

Of course, I had to pour myself a shot before using it for a cocktail or mixed drink, so I purchased a 750ml bottle and placed it in the freezer about an hour (Vodka should be served cold and never on the rocks).  After chilling the vodka, I poured it neat (“Neat” is the terminology when you want a drink without ice) and gave it a try.

Good God!  It was excellent.  I was surprised at the smoothness, given its corn base.  I am partial to vodka from grapes, which is more of the French fashion.  Similar to Belvedere with its smoothness, Toast totally blew Grey Goose and Cîroc out the water with its amazing balance, flavor, and traces of coconut water; which it is made with resulting in an amazing freshness when you drink it straight.

As with any other brand I like, I began to do my research on its history, and I was pleasantly surprised to discover this wonderful brand was created and owned by a black man—Mr. Dieuveny Louis, known by everyone as “DJ”.

Another pleasant surprise was my discovery that the CEO and creator headquarters is right here in Miami.  Cameraman Korey and I met DJ at his downtown Miami office, a beautiful space overlooking the downtown Miami skyline and with Toast brand bottles adorning the window ledges, on display cases, and on his modern work desk.

DJ originally from Haiti, migrated to West Palm Beach when he was only 10 years old and, believe it or not, his background in the church indirectly led to his current role as purveyor of the fine Toast brand.  Raised in the church, DJ loved and studied music, becoming a phenomenal guitarist.  By age 14 DJ’s musical and technical skills evolved, and he began collaborating with musicians and artists to produce tracks.  This activity turned into a lucrative business at an early age, eventually getting him involved in the musical nightlife of clubs and bars.

After relocating to Miami, FL at the age of 21, he got involved in the Miami club scene, which spiraled to an event/concert management company.  With a heart for the community, DJ began planning a small benefit concert to assist youth in Haiti and the U.S.   The small benefit concert quickly morphed into a major festival, bringing acts like Wyclef Jean and Rick Ross as headliners.  Thousands poured into the concert grounds and DJ was able to do great charitable work in Haiti and the U.S. with the proceeds.

As fate would have it, on January 12, 2010, DJ was in Haiti volunteering and in talks with officials on rehabbing a hospital.  He checked into his hotel, planning to take a nap, but intense hunger prompted him to leave the hotel to search for food.  Within minutes of leaving the hotel, a 7.0 magnitude earthquake hit the island, killing everyone inside DJ’s hotel.

The reality of his close call caused DJ to become hyper aware of life’s finality. As a result, he set out to create vodka that would be a “toast” to life and a celebration of giving and living.

“As a black male entrepreneur, I find it important to do your best and work hard. I know that my journey can possibly be more difficult, so I set my mind to always outperform my previous success. I came up with the Toast slogan, ‘To Life, to Love, to Us,’ as a constant reminder of what life is all about. The brand name itself is homage to life.”

He partnered with a Tampa based distillery and worked four years in developing the first batch of Toast Vodka.   Cameraman Korey and I had the privilege of having a private tasting in the Toast offices. The Toast brand also has a gin, tequila, and rum; all amazing and smooth, but the vodka is truly the show stopper.  There will be flavored varieties hitting stores within two years, and I can’t wait.

After our brief interview, DJ suggested a South Beach bar & lounge that carries his spirit.  There, we challenged their house mixologist to create some of their featured cocktails, but replacing their suggested spirit with Toast vodka. The mixologist did one better on us, and created a unique carrot inspired cocktail with Toast along with other craft cocktails. The mixologist’s amazing skills coupled with the remarkable vodka created a refreshing and oddly healthy-feeling cocktail. I know that’s stupid, but the drink felt as if it were giving me life (I’m not an alcoholic, stop judging me).

As we conversed over the beautiful cocktails, DJ explained how his ultra-premium vodka TOAST, was the official vodka of the 35th America’s Cup (www.americascup.com/en/news/2161_Toast-to-the-Americas-Cup-TOAST-Vodka-named-as-Official-Vodka.html#).

First contested in 1851, the America’s Cup is not only yachting’s biggest prize, it is also the oldest trophy in international sport, predating the modern Olympic Games by 45 years. As you can imagine, many who attend this event are from “old money,” and DJ had the opportunity to rub shoulders with some of the world’s most wealthy families and individuals, even meeting Prince William of Great Britain.

Far from a [email protected]#& story about some rapper or rock stars vodka company, Toast is the real deal. So confident of his brand’s quality, DJ proclaimed the company will never have a Puffy, Jay Z, or famous face in front of his vodka.

“I believe my brand will speak for itself.  The quality and love that is inside my vodka is all the celebrity it needs.”

I honestly couldn’t agree more. With great taste and a beautifully designed frosted bottle, Toast is set to take the industry by storm.  Racking up awards and attention both nationally and internationally, in 2015, TOAST was awarded GOLD in the Los Angeles International Spirits Competition – beating out well known brands such as Grey Goose, Titos, and Deep Eddy. I love Deep Eddy Vodka out of Texas, but absolutely hate Grey Goose and Tito’s – which is cheap and bitter tasting.

Not surprisingly, DJ has just solidified a deal with Premier Beverage Distributors which will allow the brand to be easily accessed around the nation in stores and restaurants.

DJ and Toast are perfect examples of my personal standards for spirits and my hope that people, especially people of color, will become more selective. Toast is both GMO and gluten free.

Below are guidelines for judging the quality of vodka:

Look: Judge vodka by pouring it in a clear glass and holding it up to a light. The vodka should have a slightly thick liquid appearance. High quality vodka that has been in the freezer may have a hint of blue or cream color. You may also notice a gentle sheen or soft glow.  This is what I experienced when examining Toast, which was an excellent sign this is a quality product.

Smell: Unflavored vodka should NEVER have a medicinal smell reminiscent of ethyl spirits.  Quality vodka should be as close to odorless as possible. This was the case with Toast, which had a very light, to nonexistent smell.

Taste: Ok, my people.  This is what separates premium vodka from the rest. Unlike Smirnoff and Grey Goose, which both have a watery, harsh/caustic, bitter and gross taste; Toast is smooth, crisp, and honestly a bit refreshing; easily drinkable straight with a nice squeeze of lime. Just never have vodka on the rocks, which is a recipe for watering it down and creating a disgusting watery mess on your hands.  This vodka is very smooth on the palate, unlike other non-premium vodkas that cause you to make those super ugly faces when sampling them.  Quality vodka should taste smooth and soft, point blank period.

CEO and creator DJ has outdone himself with this well-crafted vodka.  Even though the mixologist changed my life with the cocktails, you may want to try the vodka straight, neat, and chilled before mixing it.

Although it is fabulous in cocktails, you will do yourself a disservice if you don’t try it straight first. Toast is available online and in hundreds of restaurants and liquor stores across the U.S. To find a location where you can find this black owned vodka, visit, http://www.toastvodka.com/buy-toast/. Call (305) 531-5551 for more information on ordering and purchasing TOAST.

We will have some more awesome cocktail recopies available when I’ve gotten the measurement for you all. I will post them here. Don’t forget to follow us on Facebook and Instagram at The Hungry Black Man and subscribe to the blog for great material weekly!